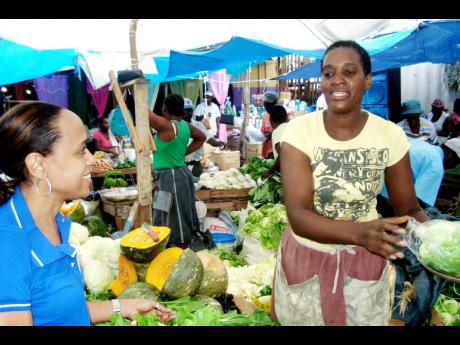 Some Sundays ago, I attended church in the fruitful centre-island town of Kellits. Looking over the hills of northern Clarendon, the cultivated fields showed promise of breaking the cloud of weak growth shadowing the all-important agricultural sector.

Here are communities of peasant farmers and traders who maintain levels of social stability and economic sufficiency impossible in places of urban sprawl, but weakened by the twin challenges of inaccessible credit and informal land tenure.

Both are systemic problems, the solution to which lies within our grasp. Horace Dalley, the member of Parliament, reports that few, if any, of the farmers in that breadbasket, as in the areas of South Trelawny – where productive and irreplaceable topsoil is about to be scraped off to profit some bauxite company – have registered titles to their lands. As such, they become easy pickings for forced buyouts, scandalously abetted by government agents.

It happened in the 1950s and can happen again.

All this, when there are laws enough to facilitate the issue of titles, the bestowing of secure tenure on thousands of farmers and householders, thus improving the productivity and social circumstances of a third of Jamaicans.

The Registration of Titles Cadastral Mapping and Tenure Clarification (Special Provisions) Act, with certain easy amendments, together with existing statute and case law relating to adverse possession, need to be applied across the nation to achieve the resurrection of dead assets in Kellits, Troy and everywhere else; in squatter schemes and abandoned inner-city premises.

There are survey costs attached, properly to be shared between the State and the party who will benefit from the entitlement. This investment will yield perpetual multiples from land taxes, transfer taxes, and hugely from the fruits of formalised useage. Land titling is the foundation for the relief of rural poverty, itself the parent of urban blight and more.

Since the Government and its agencies own more land than any other class, they must lead in the liberation by easing the constipation of requiring replete infrastructure as a prequisite for titling. After all, there is existing law which provides for covenants to be attached to titled ownership, binding owners to contribute to establishing or improving facilities rather than having recourse to a branch of government.

Despite the law, this is not happening now. Our governments thereby become the architects of low growth and personal disappointment. Witlessly, we perpetuate a centuries-old mental, legal and regulatory construct, which was never intended to provide the opportunities of ownership for the majority of our people.

In sum, although we have canonised them as national heroes, the essential complaint of Paul Bogle and George W. Gordon on behalf of the peasants of St Thomas for land access and ownership, remains unrequited.

So without titles against which a mortgage can be registered, without insurance, and given the dead-letter of the Facilities of Title Act, not to mention a hopelessly risk-averse financial sector, credit to plant crops and raise livestock has been virtually unavailable, despite massive liquidity comprised of savings and taxes from the very people who cannot borrow, except from the usurers.

Recently, the Bank of Jamaica has been offering almost free tranches of our money to banks as well as relaxing their reserve ratios, in the hope of stimulating more credit to the productive sectors. But is this working sufficiently? Oh, there is endless credit for the purchase of motor cars and bikes, but certainly not for agriculture.

I contend that this is madness and will keep us in the downdraught of pity-mi-likkle growth, an impossible trade deficit, rural malaise and high crime, no matter how long we delude ourselves about states of emergency.

What if a condition of the relaxed facilities to the banks was that a negotiated portion was earmarked for lending to boost agriculture and agro-processing? At least that would be a start in a new and productive direction; an indication of correct priorities and straight thinking.

The political party that liberates Jamaican land ownership, ends the iniquity of unfair contract employment and credibly promises equitable to quality education should win the next and subsequent elections.