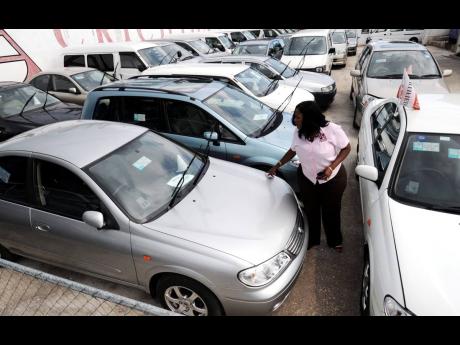 On the website of the Trade Board of Jamaica ( http://www.tradeboard.gov.jm) is a recent notice that Jamaica’s Motor Vehicle Import Policy will be amended to increase the age limit for all categories of vehicles which may be imported. The age limits of motorcycles which may be imported has been raised from five to ten years; of cars from five to six years; and of light commercial vehicles from six to ten years.

The Government did not just get up one morning and decide to allow the importation of older vehicles; the notice advises that the decision was taken “after a series of consultations with representatives of the Jamaica Used Car Dealers Association (JUCDA)”.

“Additionally, he suggested it will provide opportunities for persons in the agricultural sector and those engaged in commercial activities.”

Mr Hamilton also said that “sales will also be boosted by the changes”.

On November 22, 2011, when the Hon Christopher Tufton was the minister of industry, investment and commerce, the Jamaica Information Service (JIS) reported: “Effective December 1, 2011, the maximum age limit of certain categories of used motor vehicles that can be imported will move from three to five years for motor cars and from four to six years for light motor vehicles.

“Rationalising the new policy, the minister explained that the industry had declined significantly, hitting an all-time low in 2009. ‘The used car industry was hard hit by the global recession, increased demand from other markets for three-year-old cars, as well as unfavourable movements of the Japanese currency. This resulted in a decline of over 57 per cent between 2008 and 2009,’ he noted.

“He emphasised that it is against this background that the policy modification is being implemented ‘to make motor vehicles more affordable to lower-income groups who cannot afford to purchase new cars, as well as to boost activity in the used car sector’.”

The JIS release went on: “President of the Jamaica Used Car Dealers’ Association (JUCDA), Lynvalle Hamilton, in welcoming the modified policy governing the importation of used cars, said that consumers should begin to experience the cost benefits of the extended age limit on imported used motor vehicles early in the New Year.”

HABIT WITH THIS GOVERNMENT

Clearly, Mr Lynvalle Hamilton, president of the JUCDA, has a particular talent and aptitude for lobbying the Government to “boost sales”, as he puts it, and to “boost activity in the used car sector”, as Minister Tufton put it.

There can hardly be a person who would disagree that there are already too many cars clogging Jamaican roads, particularly those in Kingston, Montego Bay, Spanish Town, and major rural towns. Could it really be government policy to offer incentives to further increase the number of second-hand vehicles on the road?

The issue is not just overcrowded roads. Importing older and older vehicles means that maintenance costs will be higher and that sooner, rather than later, scarce foreign exchange will have to be spent to import spare parts. Is this in accordance with government policy?

And I have not even raised the environmental implications of such a move!

Jamaica lacks a rational transportation policy that reduces the use of polluting fossil fuels. Why not an overhead people-mover (skytrain) from Papine to Portmore similar to ones in other Third-World cities, like Metro-Manila and Bangkok? Instead, we built a flyover at Three Miles to promote easy movement of motor vehicles, burning more and more petroleum products.

Listening to the self-interested arguments of the JUCDA is not going to benefit us in the long run.

Peter Espeut is a sociologist and development scientist. Email feedback to columns@gleanerjm.com