Tony Deyal | The umpire strikes back 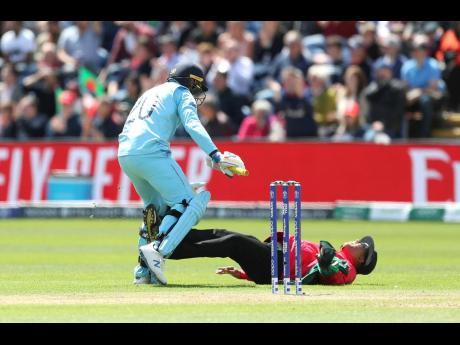 If we judge William Shakespeare by the first act and scene of his play, Macbeth, he would have been a terrible baseball and cricket umpire, and an even worse football referee. After all, he wrote “ Fair is foul and foul is fair.”

However, when I said this to one of my friends, a rabid West Indies cricket fanatic, he insisted, “Shakespeare can’t be as bad as the two umpires in the West Indies match against Australia.”

Even the India Times, parochial as it tends to be, headlined a story on the game which took place just over a week ago on June 6, ‘ICC World Cup: Dodgy umpiring leaves West Indies fuming’. It is the sort of experience which caused former Indian cricketer and one-liner genius, Navjot Singh Siddhu, to comment on a West Indian umpire, “Eddie Nichols is a man who cannot find his own buttocks with his two hands.”

What is apparent is that not just the West Indies but the game of cricket, which started in England and is on display on its home turf in the biggest cricket event in years, now has a record that is much worse than Sri Lankan cricketer’s E.A.R. de Silva, who in 10 matches and 2,328 balls only got 10 wickets at the astronomical average of 129 per wicket.

West Indians, including the players, were not amused. After all, we are people who threw beer bottles at our own umpires in Barbados, Guyana and Trinidad, and while not into bitter as much as we were in the old days, and may no longer have what the English call the ‘bottle’ to protest in the same way, our anger is still a heady brew, as angry posts on social media demonstrate.

According to the Times, “On Thursday, the umpires, Chris Gaffaney and Ruchira Palliyaguruge, were forced to change as many as four of their decisions by third umpire Marais Erasmus. Gaffaney, a former first-class player (83 matches) from New Zealand, also missed a glaring front-foot no-ball from Mitchell Starc. If that had been called, Gayle would have enjoyed a free hit, but instead, he lost his wicket off the next ball.”

I checked out Ruchira Palliyaguruge and found that he is a Sri Lankan “lower level” umpire whose umpiring career has been marked by controversy. According to an article in The Sri Lankan Sunday Times, senior cricket umpires complained to Sri Lanka Cricket Board that the selection to the ICC Panel was not done on merit. They insisted that Palliyaguruge’s umpiring is way below standard. However, the Sri Lankan cricket bosses claimed that the selection was not based on field performance alone but on the potential and merit of those chosen.

If the debacle in Nottingham has taught me anything, it is that horses are not the only creatures to sleep standing up. As the famous baseball manager and coach, Leo Durocher, quipped, “I never questioned the integrity of an umpire. Their eyesight, yes!”

I grew up experiencing and suffering from some really bad umpiring decisions which were (and are) still prevalent in Trinidad and other Caribbean countries, especially in the ‘bush’ leagues in which I cut my cricketing teeth and almost extracted some from a few of the umpires I encountered in those days. Getting hit on your batting pads, regardless of how far outside the leg or off stump, was out leg before wicket (lbw). It was the sheer ‘bold-facedness’ of the umpires on their home grounds.

I have never forgotten my experience in a match we played in a relatively distant village. I was a fast bowler in my teenage years and I had the batsman out in three consecutive balls except that the umpire called, “Not out”, “No ball” and “No ball” again, even to a ball I bowled from behind the crease and it was caught at cover. What caused harsh words, threats, a man running home to fetch a gun and our fleeing the scene, was when, at the end of the over, the lucky batsman strolled down the pitch and asked the umpire, “How I batting Mamoo (Hindi for ‘Uncle’).”

HISTORY FULL OF IT

History is full of other umpires of the same dishonest ilk, apparently blind in one eye, cannot see with the other and totally stone deaf to any appeals.

There is a story about Fred Trueman, the great English fast-bowler and stand-up comedian. The sequence is, “Trueman bowls. Batsman is trapped plumb lbw. Trueman appeals. Not out. Next ball. Trueman ever-so-slightly irritated. Trueman bowls. Audible snick, ball deflects and sails upward, caught behind. Trueman appeals. Not out. Third ball. Trueman a little more irritated now. Trueman bowls. Through the gate, stumps spread-eagled, middle stump uprooted and cartwheeling. Trueman turns to the umpire and says with a wry smile, ‘We nearly had him that time, didn’t we’?’”

Fortunately, there is a third umpire in all major games now who uses technology to review the decisions of the on-field umpires. But, in a few of the world cup games so far, there is a catch which neither the technology nor the umpires can do anything about unless the rules of the game change.

In the India vs Australia match last Sunday, June 9, David Warner played a ball from Jasprit Bumrah straight on to his stumps and the bails didn’t budge or even quiver. In cricket, at least one bail must be dislodged for a player to be given out bowled, stumped, run out or hit wicket. That bail-out for Warner could have cost India the game. Maybe India could take the case to the Old Bailey and ask that the same modern technology used to determine whether someone is out or not out should be used to give the batsman out if the ball hits the stumps and the bails fail to fall.

Tony Deyal was last seen reminding Windies fans about the batsman who denied he was out and told the umpire to look in the next day’s newspaper and he would see. The umpire replied, “No. You look. I’m the editor.” Email feedback to columns@gleanerjm.com