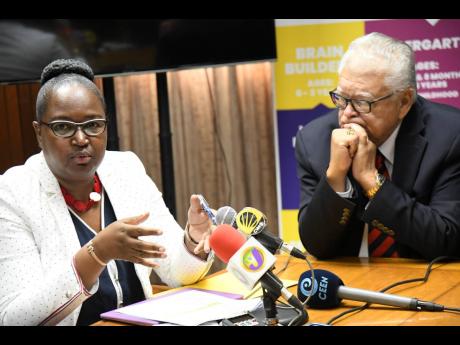 Rudolph Brown
Minister with responsibility for education, Karl Samuda (right), and permanent Secretary in the ministry, Dr Grace McLean, present the results of the Primary Exit Profile during a press conference at the ministry’s offices in Kingston last week.

The only way Jamaica will achieve rapid, inclusive, sustainable development is if we become a nation of world-class educated, highly trained and well-socialised workers. This applies to all of us, not half or less, who can turn up the frightening graph of low productivity. Our economy and national security depend on this. Nothing else will work. And the recently released Primary Exit Profile (PEP) results will not take us there.

While we justifiably praise the relatively few who have done very well and try to pretty up the rest as having done “fairly well”, the data reveal a crisis in education and training which it is self-delusion to ignore.

Some 60 per cent of our 12-year-olds, after two or three years of pre-primary preparation and six expensive years of ­primary school, have fallen below the minimum standard in ­mathematics to indicate readiness for high-school learning. Forty-five per cent of the same age group have proven that they lack sufficient command of the English language, the very medium of teaching, learning and social communication. Fifty-one per cent have an inadequate grasp of the principles of science, disciplines which are indispensable to productivity in the world economy; while 37 per cent fell short in the relatively easy subject of social studies.

It is impossible to generate prosperity from such a poor base. There is obviously a serious problem of underachievement at the primary and pre-primary levels, long diagnosed and still largely untreated. For proof, just look at this year’s education budget and Government’s own projections for the next three years. So while it is excellent news that there is a place in high school for all grade-six ­students, sending them on without the required achievement levels to be able to manage high-school work is a cruel exercise in futility.

No society can flourish if half of our grade-sixers are thus compromised each year. And we still don’t know the gross percentage scores nor the level and adequacy of the examination questions of this year’s PEP. Alarmingly, there are those who have analysed the test papers and assert that they were dumbed down in order to make the outcomes look good for the Government. The excuse by the former minister that the disastrous mock-exam questions had been set at a very high level, has not been forgotten. High levels, not expedient compromises, are what the global marketplace requires of us after all.

This is not a situation on which there can be any partisan political divide. This is as much a national predicament as was Hurricane Gilbert. In fact, this situation is worse because the consequences are not readily obvious, and they are intergenerational in their destructiveness.

A committee has been struck to examine the effectiveness of the nearly 15-year-old education transformation programme. That will likely take a long time. While useful, the crisis laid bare once again by the PEP results requires immediate action. Here are some suggestions.

First, it makes no sense to continue promoting students on the basis of age if they have not mastered the learning of the earlier grade. Clear criteria for advancement through school need to be developed and enforced. Next, the truancy of about 20 per cent, yes, one out of every five students, absent from school on any day, has to be curtailed now. If you miss school chronically, you are most likely to fail. Simple truth.

All parishes should be designated truancy zones and at least 100 social workers assigned, particularly to keep boys in school and more broadly, to reduce absenteeism from a stubborn 20 per cent to a manageable five per cent. Invest money for food, transportation and personal necessities, which are the main reasons for weak attendance.

And more: the three per cent of boys who drop out of school before completion must be tracked and reintegrated in purposeful relearning and training instead of being consigned to idleness, uselessness and, eventually, antisocial behaviour. Most of the girls who drop out due to pregnancy are rescued at the wonderful women’s centres. What comparable strategy does the system provide for boys?

Starting now, those high schools to which weaker PEP scorers are assigned must receive higher per capita grants and more skilled personnel, because their task is much harder than traditional schools which receive high ­scorers. Campion and Haile Selassie can’t get the same money, yet be expected to produce comparable results when they sit the same examinations.

Last, for now, every PEP graduate with less than 65 per cent in any of the papers must be engaged in an intensive remedial programme put on by their receiving school, through July and August and lasting as long as needed after that, to ensure that an adequate learning standard has been attained by all before the high-school syllabus is begun. This should be non-negotiable. The loss of the far-too-long-anyway summer vacation would be a necessary price to pay for the positive dividends which would follow in short order.

Next time, we will discuss the crisis in primary schools, the revolution needed in teacher education, and the need for what Minister Samuda has aptly called a “crash programme” in recruiting, training and retaining teachers of mathematics, science and social ethics.