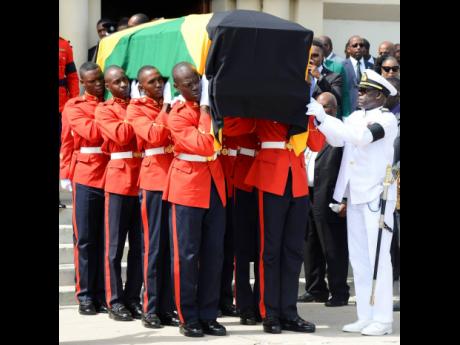 Ian Allen
Members of the First Battalion Jamaica Regiment bear the flag-draped coffin with Edward Seaga after the state funeral of the late former prime minister at Holy Trinity Cathedral in Kingston on Sunday, June 23.

Literally hours after the passing of Edward Seaga, Jamaica’s fifth prime minister, they started seeping from under the floorboards where they remained mute for decades. Emboldened by his death, they moaned as they advanced into the public sphere.

I am not a political creature. In fact, I’m not a fan of politics. My wife and I vote together, but she has never had any idea who I vote for, and I have never had any idea who she votes for. I have avoided aligning myself to any political party because I want to be free to criticise or praise either of them. I am a staunch Jamaican who puts country way above politics.

It’s unnecessary to drag out negative things about Mr Seaga at a time when he is not alive to defend himself, if he chose to do so. It is unproductive to dredge up muck when it does no one any good and only stinks up the place. It’s pusillanimous to bare one’s chest when the person that you accuse can’t respond.

I’ve been having back-and-forth discussions on the matter of ­people posting negative aspects of Mr Seaga’s life at this time. The rationale is that they are ­attempting to maintain balance in light of all the glowing tributes being heaped upon the former leader. My counter-argument is this: There have been many ­mellifluous commentaries, tributes and awards showered on Mr Seaga during his lifetime, and especially during his later years, where was the balance then? Obviously, no one felt brave enough, bold enough, inspired enough or aggrieved enough to step up and say all the things that they are saying now. Therefore, it’s manifestly unfair to do it when his back is turned.

I’m reminded of an incident that I witnessed in a supermarket in Liguanea many years ago. As I approached the cashier, I saw an elderly, diminutive and wizened Caucasian man delivering a proper tongue-lashing to a young, tall, burly and surly-looking Afro-Jamaican. I don’t know what precipitated the cussing out, but I was intrigued by the old man’s courage. I feared that if the younger man lost his temper, one blow would kill the little guy.

The verbal onslaught was one-sided. The younger and much bigger fellow just stood there and absorbed innumerable insults. He reminded me of Lot’s wife: he was catatonic and had a dull facial expression. Mercifully, the little old man spent his energy after saying all that he wanted to say. He ended his fiery session, grabbed up his groceries and walked leisurely out the glass doors. The big guy pivoted to stare at him as he exited.

As soon as the glass doors closed behind the old man, the big guy finally broke his silence and mumbled, “Yuh see all yuh. Unno tink seh unno better dan me, you know. Yuh can gwaan, unnu lucky seh … .”

I didn’t catch the rest of his soft, monotonous, plaintive monologue. I was too busy thinking to myself what a big coward he was. He waited until the old man’s back was turned and he was far out of audible range before responding. His grumbling was useless now.

Many famous and revered leaders have very unpleasant things in their past. People should save the rehashing of negatives for debates on Seaga’s worthiness for a posthumous award. I’m not defending his past; I’m defending rectitude.