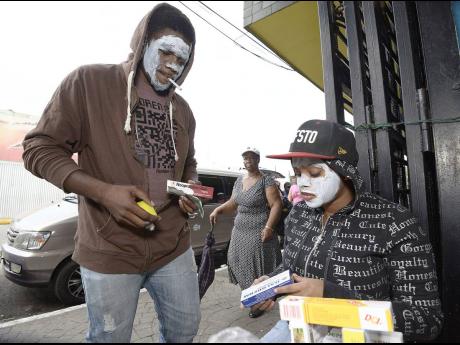 The issue of skin bleaching is yet again making the rounds on talk shows, and the media in general, largely due to letters reportedly dispatched from the administration of the Irwin High School to the parents of students who had issues with their natural hue. Having listened to the horde of opinions expressed, I must ask, why are we pussyfooting with this dangerous practice, whitewashing the issues under the guise of perceived social inequities regarding complexion? Skin bleaching is dangerous and should be banned.

There is a huge bandwagon of sympathisers, expressing understanding and offering explanations and justifications for stupidity. To quote t he Gleaner (Editorial: Bleaching beauties; Saturday, June 29, 2019) “ there are deep historical, cultural and sociological considerations that have led to Jamaica’s conflicted view of race, colour and class”. This is the rationale for the bleaching phenomena? Damn foolishness, I say.

I fully support t he Gleaner’s view that “the genetic argument that skin tone, in and of itself, determines success is flawed”. The wagon-riders can run up dem mouth all dem want, but guess what, neither dem nor dem pickney are practising day ghosts.

Calling a spade a spade

Applying creams of questionable origins and ingredients all over one’s body is dumb, let alone where those creams are going to lighten one’s skin through chemical and biological reactions which are yet to be fully understood, but which no doubt have an adverse impact on the skin’s ability to protect the body from invasive bacteria. These bleaching agents are known to contain various harmful chemicals, notably mercury, which can cause serious psychiatric, neurological and kidney problems.

From a security perspective, skin bleaching presents countless challenges for the security forces in tracking fugitives: while looking for the usual suspect of dark complexion, the culprits are right under their noses, chameleon-like and elusive.

Employers should also be concerned about staff members who engage in the practice. Let’s face it, the practice is unhealthy, and bleachers look ghoulish, but then beauty is in the eyes of the beholder. Customers may find them repugnant and take their business elsewhere, especially if the business involves handling food or similar consumer items. In addition, customers are not likely to take them seriously and question their capacity to handle their banking, insurance and investment affairs.

We should also consider that other employees may not be entirely comfortable working alongside them, basically for the same reasons that customers may choose to do business elsewhere.

Already I hear the bleeding hearts crying foul and citing discrimination, but remember that bleaching is a matter of deliberate choice, unlike the issue of employees afflicted with AIDS: no one deliberately chooses to become infected.

Clearly, there is a lack of understanding and appreciation for the dangers of skin bleaching, and notwithstanding current sensitisation and awareness programmes, the message is not resonating among the practitioners. Skin bleaching should be treated as a national health crisis and managed akin to drug abuse. There should be a ban on the importation and commercial retailing of bleaching agents, coupled with appropriate treatment, rehabilitation and counselling opportunities at all levels, including schools.

Enough of the whitewashing.