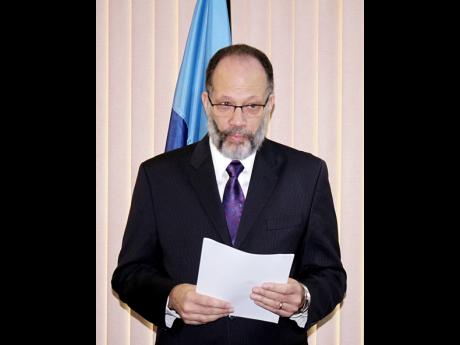 File
Secretary General Irwin LaRocque has indicated that CARICOM must go beyond talk on the CSME.

The tepid commemoration of CARICOM Day across the region illustrates the general difficulty with implementation. The decision was taken, but only a few member states and regional institutions actually implement it, demonstrating their commitment to the community which they founded.

This 40th Conference of Heads currently under way will focus on the implementation of the CARICOM Single Market and Economy (CSME). You will recall that Jamaica’s 2017 Report of the Commission to Review Jamaica’s Relations within the CARICOM and CARIFORUM Framework led the Community to reflect on the protracted and unbalanced implementation of the CSME at the 39th Heads of Conference, held in Montego Bay last summer.

CSME implementation has been in progress since the Revised Treaty of Chaguramas was adopted in 2002. Arising from the Montego Bay conference, a Special Heads Meeting was convened in December 2018 in Port of Spain, Trinidad and Tobago, focusing specifically on the CSME and resulting in the adoption of the St Ann Declaration. The 30th Intersessional Meeting of the CARICOM Heads, held in St Kitts-Nevis in February 2019 ,addressed progress in CSME implementation.

The CARICOM Council for Trade and Economic Development has responsibility for implementing the CSME. The 48th COTED Meeting was held in Georgetown, Guyana, April 29-30, and, as expected, CSME implementation was a key agenda item. On this, I took particular note of the opening remarks made by CARICOM Secretary General, Ambassador Irwin LaRocque:

“In a little over two months, our heads of government will be expecting to receive a report card that indicates that the mandates laid out last July in Montego Bay; in Port-of-Spain last December; and in Frigate Bay last February have been fulfilled. Priorities were identified by the leaders and an implementation plan agreed upon. Member states recommitted fully to the effective implementation of the CSME and agreed to the timelines – short, medium and long term … . We cannot come to meeting after meeting and agree to a plan and not carry forward the work.”

The secretary general was clear: Member states must demonstrate their commitment to implementing the CSME by their actions. He reminded the ministers of the challenges currently existing globally which CARICOM’s small economies must face head-on.

It seems that Prime Minister Mia Mottley of Barbados, who has responsibility for the CSME, is committed to making progress. She has been endeavouring to have action taken on CSME decisions both at the national and regional levels.

The prime minister has particular ­interest in engaging with the regional private sector and labour representatives as set out in the St Ann Declaration. The Caribbean Congress of Labour already exists. The challenge is organising the regional private sector. PM Mottley has met with sector representatives to advance engagement and encourage organisation.

The Network of Caribbean Chambers of Commerce was formed in April. The Caribbean Association of Industry and Commerce still exists in some form. There are a number of ­product-specific regional private-sector organisations. The Caribbean Business Council, which could be an umbrella body, remains a work in progress after 13 years. The St Ann Declaration envisages a private-sector body as an associate institution of CARICOM and a key player in the CSME. The onus is on the regional private sector to find an acceptable structure from which to engage with CARICOM and in other regional and international trade matters.

I am hoping the performance appraisal for the CSME, to be presented to CARICOM heads in St Lucia, will demonstrate, through action, a genuine commitment to implementation and problem-solving. I await the communique.

Maybe next year, CARICOM Day will be marked by all member states signalling their renewed commitment to the Community and implementation of their decisions.