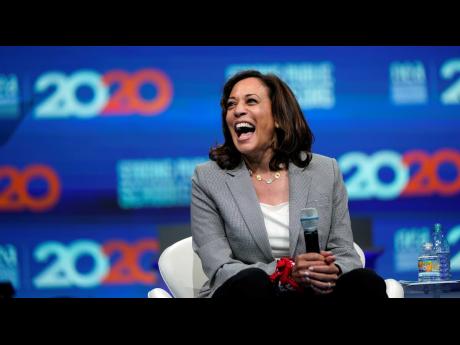 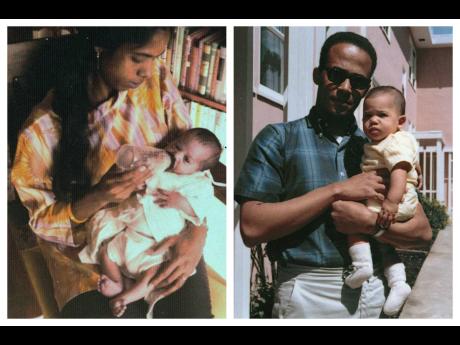 Uncredited
This combination of undated and April 1965 photos provided by the Kamala Harris campaign in April 2019 shows Shyamala Gopalan Harris, 25, and Donald Harris with their daughter, Kamala.
1
2

There’s a putative ‘daughter’ of Jamaica running for president of the United States, and like most other Jamaicans, I take some amount of pride in that.

The United States is among a few countries in this world where it is quite normal, almost unremarkable, that the child of two immigrants should aspire to the highest office and have a real chance at it.

The Gleaner, my Jamaican newspaper, has been following her, from the announcement of her campaign, through her acknowledgement of her Jamaican connections by way of confession that she smoked weed, right up to the post-debate squabble about the true nature of her roots.

Ms Harris come across as confident with great stage presence, and the pundits who chart these things have determined that she even ‘won’ the first round of Democratic debates. That’s a fair conclusion, given that her polling numbers have surged and her campaign seems to be collecting cash faster than a ‘yardie’ scamming operation.

But how she shot to special attention was a little curious. She levelled an attack on Joe Biden, the frontrunner in the crowded Democratic field, for not supporting mandatory school busing, and more generally, it seems, for having had some amount of collegiality with old-fashioned segregationists back in the 1970s.

It was an emotion-laden swipe at Biden, and one where she invoked her own experience and history. But outside the emotionalism, it’s not quite clear what she was charging the stunned Biden with. It turns out that Harris’ policy position on school busing – that it should be voluntary for school districts – is virtually indistinguishable from Biden’s. Meaning, therefore, that if you remove the theatrics, Biden stood accused mostly of being old, white, and perhaps, male. This is identity politics, in which, unfortunately, Ms Harris seems to be an expert practitioner.

I suppose that like many other people, the dramatic call-out of Biden made me pause to have a deeper look at Ms Harris and to consider her position on some of the issues.

Mind you, I had cursorily done that before, subsequent to the kerfuffle after she was asked on a New York radio show if she had ever used marijuana.

This is how she answered:

“Half my family is from Jamaica, are you kidding me?”

That’s how I knew that Kamala Harris is a Jafaikan, not a Jamaican.

Now I consider the association of Jamaican heritage with weed-smoking a result of reggae and Rastafarian valorisation of marijuana, so it is somewhat deserved. We can’t promote an image then turn around and be frustrated that other people actually get the message.

However, at times, the stereotype can be annoying. That “Jamaica is marijuana paradise” and “all Jamaicans smoke a daily spliff” isn’t conducive to people taking us seriously on a whole range of other important aspects of life.

But real Jamaicans also know that the weed wonderment is only a part of Jamaican culture, and that there is enormous variety on the island regarding people’s acceptance or promotion of it.

Don’t take it from just me. A real Jamaican, Donald Harris, the presidential candidate’s father, was unsparing in skewering her for her nonsense:

“My dear departed grandmothers, as well as my deceased parents, must be turning in their grave right now to see their family’s name, reputation and proud Jamaican identity being connected, in any way, jokingly or not, with the fraudulent stereotype of a pot-smoking joy seeker and in the pursuit of identity politics … . Speaking for myself and my immediate Jamaican family, we wish to categorically dissociate ourselves from this travesty.”

Now remember where I began: The mere fact someone of Jamaican heritage is running for president makes me proud. Well, the fact that her father nailed her nonsense, and connected it to the poisonous identity politics that is such a big part of her appeal and stock in trade, makes me many times prouder. As far as I’m concerned, he was speaking not only for his “immediate Jamaican family”, but for mine as well.

Honestly, he’s the one I would like to hear from some more. Sadly, it seems that he has foresworn further commentary on the progress of the election, and we are therefore forced to do without his insight. Understandable. Unfortunate.

I would have like to hear Mr Harris’ take on the latest controversy that has erupted about Kamala’s background. It came to prominence because Donald Trump Jr retweeted a post by an African-American, Ali Alexander, saying:

“Kamala Harris is not an American black. She is half Indian and half Jamaican.”

The twit confuses ethnicity with national origin, as ‘Jamaican’ is not a race. Harris’ mother is from India, another country composed of numerous ethnicities. She was born in America and spent some time growing up there, and has a brown skin colour, meaning she should qualify as an ‘American black’. But it is equally true that she is not ‘African-American’ in the sense of that term carved out by the usual language police.

In short, it would be truer to say that Harris is half-Asian and half-black, with immigrant parents from India and Jamaica.

Anyway, the tweet was later deleted by Donald Trump Jr and a spokesman even apologised on his behalf. Thereafter, all the other major Democratic contenders took the opportunity to condemn the stupid tweet as if it was some sort of major incident. I suppose the opportunity for them to virtue-signal and direct some outrage at a useless target was too good to pass up.

In terms of her policy positioning on issues, the first thing that jumps out at me is that Kamala Harris wouldn’t last a single day in the Jamaican political landscape, further underscoring that she’s more Jafaikan than Jamaican.

Harris seems to be of the view that any person who has basic Christian convictions is unsuitable for the Bench. Her questioning of federal court nominee Brian Buescher, and of nominee to the Fourth Circuit, Allison Jones Rushing, leaves little doubt that she considers Christian religious conviction a disqualifying liability. And more generally she is a strident, uncompromising, committed proselytising secularist. Jamaicans wouldn’t put up with that. Harris couldn’t win an election to the PTA of a primary school with that expressed attitude to people of faith. Jafaikan!

There’s more. Buggery is a criminal offence in these parts. Meanwhile, Harris is a proponent of not just buggery, but gay marriage. Abortion is a crime in these parts. Harris is a strident proponent of abortion on demand. Prostitution is illegal here. She proposes legalising it in America. We enjoy a mix of public and private healthcare system. And Harris would cancel all private health insurance. That bird wouldn’t fly here.

In Jamaica, we value our border and prosecute those who overstay in the country without permission. But Harris proposes virtually open borders, was part of the administration of a “sanctuary city” where immigration rules are just ignored, and seems to consider any immigration enforcement a human-rights violation.

I could go on and on! Jamaicans would not put up with her for a moment if she brought her thinking here. Only Americans entertain that kind of rubbish.