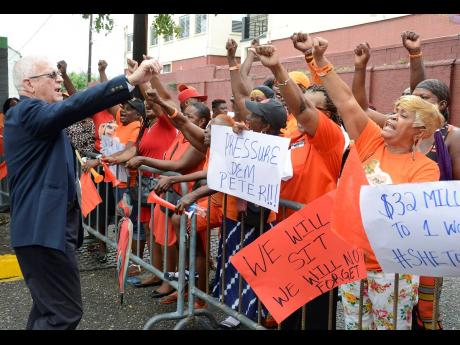 Politics, especially in Jamaica, is nothing if not hilarious.

Guess which PNP MP said this, immediately after the April 6 East Portland by-election in response to a reporter’s query as to whether Peter Phillips would be asked to step down:

“No, he’s not going to be asked to step down. Dr Peter Phillips did the very best he could in the circumstances and he has the confidence of the majority of the members of the executive and, I believe, ALL the delegates and members of the party as well.”

you know that I love you.

I love you and nobody else!

Ding, ding, ding! Ring the bell! Give the caller a Domi(No) Prize! Of course, it was Central Kingston MP Reverend Ronnie. Two months later, on June 8, Peter Bunting asked Peter Phillips to step down by way of announcing his leadership challenge. On June 23, Imani Duncan-Price became Central Kingston delegates’ choice to replace Rev Ronnie as constituency chairman/caretaker candidate. This happened only eight months after Rev Ronnie turned back last-minute contender Lawrence Rowe’s challenge by 43 votes to 29 and boldly warned those wanting his job not to be “greedy” and “wait your turn”!

But, last week, the same MP had this to say in a widely published video, looking to me, as usual, like someone wearing a permanent halo.

“I believe politics in Jamaica, and the PNP, needs a new beginning: one away from favouritism, selfishness and corruption. We need to rise united towards a new vision of equality and opportunity. Peter Bunting has a clear vision and, I believe, a genuine commitment towards building a new Jamaica, and that’s why I support him to be leader of the PNP.”

When you snap your finger (or wink your eye)

I come a-running to you.

I’m tied to your apron strings

and there’s nothing that I can do.

I’m weaker than a man should be.

Want to know what a real poppy show looks like? THIS must be the gold standard.

What’s your actual belief, Ronnie? Were you a PNP member when you confidently asserted that you believed ALL the delegates and party members had confidence in Peter Phillips? Or have subsequent events created a Damascus-like revelation? What happened to “wait your turn”?

Why’ve you implied that Peter Phillips encourages “favouritism, selfishness and corruption”? What’s the evidential basis of that demeaning innuendo? Why imply that “equality and opportunity” would be a NEW party vision? What’s the OLD vision you supported as MP for 20 years? C’mon, Ronnie, enlighten me.

The Four Tops helped to define the early Motown sound. Lead singer Levi Stubbs (also acted as the voice of a carnivorous plant in Little Shop of Horrors), Abdul ‘Duke’ Fakir; Renaldo ‘Obie’ Benson and Lawrence Payton stayed together for four decades, producing monster hits from a variety of music genres. Their seminal 1965 hit, I Can’t Help Myself (Sugar Pie, Honey Bunch), written/produced by legendary Holland-Dozier-Holland partnership, was a plaintive confession of love.

It seems to me that there’s a PNP cadre, mostly made up of the overlooked, overshadowed, overpowered or endangered, that has gathered to support this unprecedentedly premature attack on a party leader who hasn’t been rejected by the electorate. Their stubborn insistence on sacrificing PNP prospects on an altar of personal ambition could lead cynics to dub them the Sour Grapes Posse.

It seems crystal (pun intended) clear that their vision is based on fear driven by fortune-tellers predicting a 2020-21 electoral disaster, after which many might lose their jobs. But spiritual truth teaches that we create reality from our fears. So, if they aren’t careful about what they ask for, they might just get it. And PNP could be riding opposition benches for a generation.