Orville Taylor | Reid him his rights 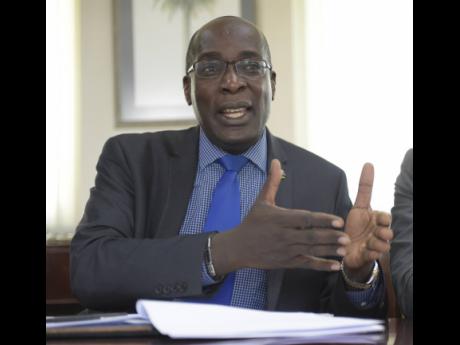 Perhaps it is because it is by the sea and it is a maritime entity, but the stench of something fishy runs from the Caribbean Maritime University (CMU) and engulfs the education ministry and perhaps the entire system itself. The dismissed education minister and former senator, Ruel Reid, has many questions to answer.

It might seem whimsical, but the names of the two main protagonists in the story – the second being Fritz Pinnock of CMU - seem to hint at what they do. Ruel is a derivative of a Hebrew name that means ‘friend of God’. Of course, being an educator, ‘Reid’ is eponymous, although he clearly did not read the signs. Rather like a good teacher, he left a clear trail for his research students to follow.

On the other hand, Fritz is a German name that means ‘the king who rules in peace’. That he did, until someone got careless and let the seawater in or out. Indeed, it does appear that he was a king, a monarch who did little reporting to anyone else and kept his activities beyond scrutiny but somehow, this Munro College alumnus, along with his ‘paari’ from his alma mater, seem to have forgotten their motto that the higher the monkey climb, the more him expose. Or as they proudly state, Inarcesitamquisoccultabit: ‘A city set upon a hill cannot be hid.’

My one concern is that the Reid was defrocked by the prime minister, who has yet to give to the nation a clear explanation as to why he was dismissed. True, a reasonable man would conclude that it is the menu of impropriety. However, despite indicating that Reid was moved to allow for the investigations, an assuring statement to the electorate might go a far way in preventing any ‘electile dysfunction’ later.

Nevertheless, Pinnock is a public servant but not a public officer. This means that unlike Reid, who has no recourse to judicial review, if dismissed unjustifiably, he can find remedy at the Industrial Disputes Tribunal, which has the authority under Section 12 (5)(c) of the Labour Relations and Industrial Disputes Act to compensate and reinstate. Ill-placed public comments by those who have oversight of Pinnock could prejudice any case against him.

It has been a source of great angst even for attorneys, who live and die by proper procedure and due process. Although British jurisprudence has clearly guided us in the direction of the rules of natural justice.

The soft administrative underbelly of the ministry was exposed around five years ago when then Minister Ronald Thwaites revealed that 80 per cent of all dismissal and disciplinary cases in the ministry, including expulsions, were reversed on appeal. Similarly, the majority of these successful appeals were not on substantive grounds. Rather, it was because the proper procedures were not followed, even though the evidence was strong.

For the record, there is no such thing as being instructed to resign. A resignation is 100 per cent voluntary. Therefore, it implies that there is choice on the part of the worker. If ‘forced to resign’, he would be constructively dismissed and would still be able to get a wok of money from the Government.

Yet, even Reid, the fallen servant, is entitled to due process. Despite the misgivings some pundits have, I have complete faith in the law-enforcement officers as they determine the extent of illegality and whether they should lay charges. Until then, let’s read Reid his rights.