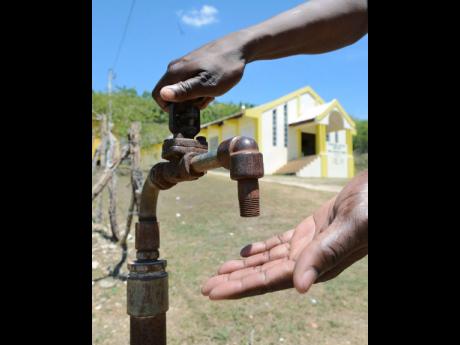 If one is to go by the old saying that Jamaica is the land of wood and water, then it would be logical to assume that as a nation, we should not have a problem growing food to feed our people or finding water to quench our thirst. Fact is, we appear to be on the verge of transitioning into a state where food and water security are seriously threatened. Then, will we be a land without wood and water? And if anyone says dawg nyam wi supper, there will be no supper for dawg to nyam.

Why is it that we are not achieving the very sensible target of growing what we eat and eating what we grow? To say that our appetites are whetted by foreign foods, as evidenced by the growing food import bills over the years, may not be entirely true. Yes, we could be doing much better than we actually are, but first, there are a number of localized issues that we must overcome.

The basic truth is that whilst our farmers are among some of the hardest working people in the land, they are not necessarily employing best practices in production and marketing.

The first problem is that much of our arable farmlands have been gobbled up by politicians and their cronies and largely left idle, leaving the true farmers to eke out a living on the ‘what-left’ lands.

Many small farmers still resort to slash and burn techniques for clearing brush-land and hillside farming is devoid of terracing practices that minimize erosion and maximize land usage.

Secondly, there is the economics of farming. Local produce costs are uncompetitive; cheaper imported foodstuff is far more attractive to the average consumer. What incentives and facilities are there for lower production and hence retail costs?

Thirdly, the reported take it or leave attitude of hoteliers and supermarket operators whose price offers for local produce are insulting is further exacerbated by those who take the local produce and are then wont to string out payments to the poor farmers.

Is the government not in a position to assist the farmers with guaranteed markets, or to relieve them of the marketing and retail burden by purchasing their produce and selling in turn through an established co-operative or outlet chain? Of course, the farmers must live up to quality requirements, and prices must be fair, standardized and controlled.

It is one thing for farmers to have to cope with high production costs, extortionate corporate entities and cheaper import competition, but the straw that invariably breaks their backs is praedial larceny. When thievery increases, so will food shortages, prices and general crisis.

By eliminating the every man for himself scheme of arrangements and having a formal agricultural retailing enterprise, the scope for selling stolen produce will be reduced as everyone, whether merchants or consumers, are duty-bound purchase through that enterprise. Purchase elsewhere and run the risk of purchasing stolen property.

There are sustainable sources of water, albeit at some distance from major urban centres, which are not being tapped into. Why have we not been installing a few miles of pipeline each year, progressing towards the major consumption areas over time?

As the impact of climate change grows on us, water security will become more critical. That will have implications for food security and health.

The slogan ‘water is life’ aptly distinguishes that which is the key to growing what we eat and eating what we grow.