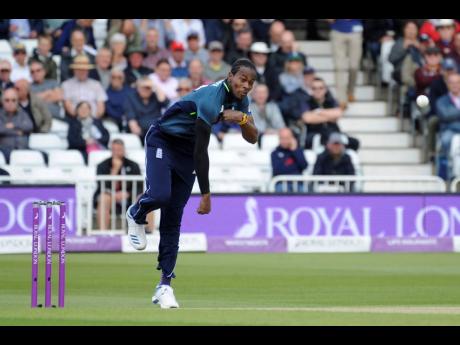 On July 13, the Old Ball and Chain had her nose out of joint.

Why? When she put Sunday lunch on the table, the family gathered (sans the Ampersand, who’s away) didn’t notice. Legendary commentator John Arlott once painted a word picture of iconic batsman Gary Sobers’ next ball reaction to his elegant cover drive off English fast bowler John Snow being brilliantly fielded as “this time, not even the pigeons on the boundary rails moved!”

That was the scene at Casa Tout when football (REAL football, not that NFL game for panty-waists) freaks SkullDougery (aka the Computer Whiz) and SputNick, whose attitude to cricket, is, at best, lacklustre, were glued to the Cricket World Cup final.

My nephew, Jay Guggoop, visiting from New York but who spent most of his young life in England, was also riveted, quietly rooting for England in a room filled with England non-supporters. Even SputNick’s significant other, Elle Don, like most of her generation more amenable to American sports, seemed interested.

Not a man (nor woman) moved towards the dining table. Old BC dropped hint after hint, but even as the hints became testy, NOBODY moved. It was unquestionably the best World Cup final I’d ever seen.

better than all the rest.

anyone I ever met.

But the best part of the game, for me, was to see Cricket West Indies’ (CWI’s) brainless, patronising attitude towards cricket development so embarrassingly exposed by the growth and development, throughout the tournament, of CWI reject Jofra Archer. Archer, a rookie playing only his 14th international match, was entrusted by England captain Eoin (pronounced ‘Owen’) Morgan, himself an Irish immigrant, to bowl the most important over of the campaign.

But that team was itself a reflection of England’s changing face and the dirty little secret behind the Brexit vote. Brexit, an electoral reality that must be completed, is too late to stem the tide of diversity in Merrie Olde England. Apart from Morgan and Archer (who only became a UK citizen two months ago), Ben Stokes was born in New Zealand (irony); Jason Roy is a born South African; and, of course, the most embarrassing duo, Adil Rashid and Moeen Ali, are sons of Kashmiri immigrants born in Yorkshire and Birmingham!

So bitter social-media comments that the team “wasn’t English enough” or was “hardly English” received short shrift from all sensible Terrans who have dismissed man-made illusions of national boundaries mainly manufactured by conquest.

If nothing before convinced CWI it’s time for change, the sight of Jofra Archer winning the World Cup for England should be the clincher. CWI needs a radical overhaul of philosophy, policy and practice. It must become a professional organisation. Cricketers must be identified from primary-school stages and scholarships made available for promising ones to attend high schools/universities while developing their cricketing talent. Archaic, insular, colonially inspired selection panels for regional teams must be discarded.

A professional management team must retain professional coaching crews for each team and, in consultation with those professional coaches, select squads to be contracted to CWI for regional teams. Thereafter, the selection of captains and teams for various series/games must be left to the coaches to pick from the eligible pools or, in exceptional cases, from outside. CWI needs to let go.

Ironically, Tina Turner’s 1989 hit Simply the Best was released on an album entitled Foreign Affair and nominated for a Brit Award (video). If CWI want the West Indies cricket team to once again be simply the best, it must clean up its act, admit past egregious errors, and implement fundamental change.