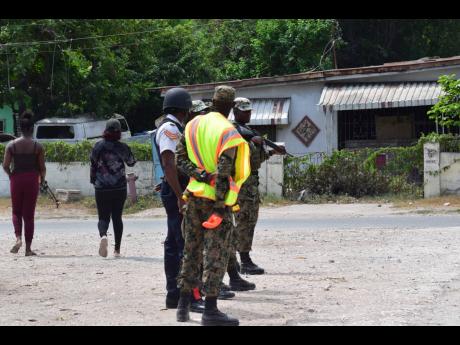 Kanique McDaniel
Soldiers take up positions in New Haven following the declaration of a state of emergency in the St Andrew South Police Division recently.

Two weeks ago, I asked whether there was a strategy beyond states of emergency (SOEs) and zones of special operations (ZOSOs). The silence has been deafening and the absence of any new initiatives has also been telling. Consequently, I have now concluded that the strategy for addressing national security issues for the immediate time being is the ‘Brown Strategy’: simple brown-nosing to the political directorate on the part of the heads of the police and the army.

It seems both the commissioner and the chief of staff are either devoid of ideas as to how to address our national security issues in any meaningful way outside of SOEs and ZOSOs or are straitjacketed by their political masters, or simply lack the testicular fortitude to implement their own strategies. So, in the absence of any meaningful ideas, brown-nose to bull.

Please don’t get me wrong: there is a place for SOEs and ZOSOs, namely to ‘dominate the operational area’ and leave the criminals little room or opportunity to carry out their shenanigans. But neither is sustainable, especially owing to the toll they take on the soldiers and police officers deployed in the affected areas for extended periods.

Furthermore, remember that ‘dawg don’t crap in dem own backyard’: the criminals are simply going to migrate to other, less policed areas and wreak havoc. Just ask the joggers in the Barbican-Widcombe area.

The political directorate is playing a very sly game. General election is constitutionally due in 2021. Runaway crime rates, especially murders, are major concerns for the electorate, and so it is critical for the ruling party to cauterise the bloodletting by the most direct, but non-belligerent means – SOEs and ZOSOs – and hope that this can carry them through for the next 18 months or so.

So, back to the Brown Strategy, the brown-nosing to the political directorate. In this particular case, the brown-nosing has apparently reaped immeasurable benefits for both the police force and the army, given the massive increases in allocations for personnel and equipment. I hope the resources will keep flowing in the years to come when costs for salaries, equipment, transportation, food and training will have skyrocketed.

What is also happening is that the criminal elements in the security forces, namely the police, are not being weeded out and, therefore, stand to benefit from the luxury of additional resources at their fingertips to carry on their nefarious activities. A stressful prospect, criminals armed with state resources.

Doctors and therapists will tell you that if you are being stressed out, the logical cure is to put as much distance as possible between yourself and the source of the stress. In this case, that cure is to remove the criminals from the police force forthwith. Better to work with a smaller, untainted group than be constantly undermined by internal enemies. It appears this is not happening because it would bruise the politicos who are heavily reliant on having the right corrupt cop in the right place at the right time.

The same can be assumed as far as major crime figures who remain at large are concerned. Politicians, especially in a pre-election environment, place heavy reliance on having the right thug in the right place at the right time.

I have no reason to believe or suggest that the commissioner and the chief of staff are other than honourable men; however, it is apt time that they give us more than just seeming brown-nosing strategies. Better that their legacies be successful and sustainable crime reversal in the eyes of the public and our international partners than the short-lived accolades of a few wily self-serving politicians.