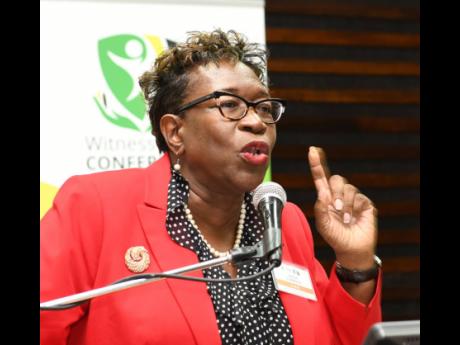 It is not at all that surprising that again it is a woman in Jamaica who is shining that unwelcome light on us, and exposing the festering parts of us that urgently need healing. Paula Llewellyn, the director of public prosecutions (DPP), stands tall among that 60 per cent who are women in Jamaica that sit in top management and makes us best the world by that metric.

While speaking recently at a conference for witness-care at the Law Faculty at UWI, Mona, her delivery was as much an impassioned plea for public understanding of some of the primitive, but heroic circumstances under which her prosecutors ensure witness participation, as it was her pointing out the long-term dangers of the ‘informer fi dead’ culture.

In many ways, it seems that we have been marching in place, making all the right sounds about moving forward on the delivery of justice, but the fact that she made the same argument more that 10 years ago (and continuously) indicates that there has not been any appreciable forward movement.

Of significant importance is Paula Llewellyn also taking the bold step to rain on the parade of those who believe that dancehall music is purely a powerful expression of poverty and social dispossession, and bears no connection to the psychological manipulation and perpetuation of the ‘informer fi dead’ culture among our youth.

A businessman acquaintance was not that supportive of the DPP. “What has happened to that case of the engineer connected with a government body who was arrested after being found with $35 million cash on him, and whole heap a high-end car and facing other serious charges? That is one year ago. How that gone so silent in the DPP office?”

A table drawn from The Political Culture of Democracy in Jamaica and in the Americas, 2016/2017, indicates that 58 per cent of adult Jamaicans trust the police to protect the people from crime. The 42 per cent who say differently – that the police are involved in crime – is in the minority, but it is by no means an insignificant percentage.

Let me fully lay out my dancehall bias. In general, growing up as a teen in the 1960s, and as a young man in the 1970s, I am particularly drawn to harmony and melody in my song choices. To me, that is sadly lacking in dancehall performances.

The pernicious influence of dancehall

To me, it is without contradiction that some of our most successful dancehall performers portray the worst in pushing the line that the perfect image for a young man to have is that crude mix of disrespect for women and love for guns and badness. The worst species in that social scenario is the person who tells the police what they have seen and heard after the yellow tape is lined out.

Jamaica is an island paradise, but it is pockmarked with guns, gangs, death and socio-economic insecurity. Many of our people have been made into robotic voting machines in garrison communities, but so have they also been programmed by the message from a part of dancehall music constantly drumming into them that they can still be proudly worse than they are.