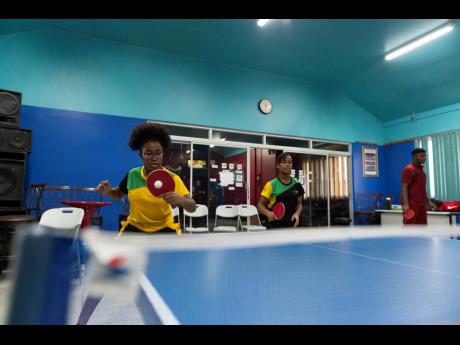 We ‘country’ children born in Trinidad and, in fact, most of the Caribbean, immediately after the Second World War did not have many recreation facilities or options.

There were two seasons, dry and wet, and this determined what games we played. No rugby or lawn tennis for us, no swimming pools or hockey sticks. The youngest of us played ‘whoop’ (a type of ‘hide and seek’), ‘stick-em-up’ (like the Wild West) and ‘Police and Thief’, which we stopped playing because increasingly it was, and still is, difficult to differentiate between them.

It was cricket in the dry season or ‘crop time’ for the boys and football in the wet. In-between, there was my favourite pastime, running, and then, when I was in my teens, ping pong (later known to us as ‘table tennis’) became a hit since as an indoor game it was not affected by the weather and, more important, in Trinidad, the land of ‘bobol’ (pronounced ‘bob-ball’, a confidence scheme, trick or fraud) and black market, rackets were not just commonplace but very cheap. In fact, bobol is supposedly still the most popular Trinidad pastime.

Ping pong was not, and is still not, my thing. As I told a Facebook friend recently, I ping when I should pong and pong when I should ping, but worse, I flick when I should smash and poke when I should lash. Even in using the word ‘lash’ I had to explain that it does not have the same meaning in Guyana as in the rest of the region.

There it is the common and accepted term for sexual intercourse. In exploring this further, we agreed that the table tennis board could do for either, but while it can take some weight, it should be net rather than gross. It is then my friend dropped some terms on me like chop, loop, snake, banana flick and chop block with the comment that if I got five minutes, I would spin a fine joke around them.

Unfortunately, in my teenage ping pong days, I was more interested in ‘love’ than anything else and had the unfortunate experience of rapidly and violently moving from two-love to none since both loves found out about each other and demanded to know what the deuce I was up to. One of them even dropped a backhand on me and the other one’s father threatened to chop me up, balls and all. I recognised that I was in too deep and doubles was not my game since I tended to make a meal of it. I tried a backspin with one of the girls later but when that did not work, I took up free hand and fore hand instead of inverted or funny rubbers. I even tried a Penhold and a Ping Pong Solo.

This leads to the main reason many of us switched from calling the game ‘ping pong’ and used ‘table tennis’ instead. The fact is that we had another ‘ping pong’ that by the time I was born in 1945 was starting to develop into an art form that eventually took the world by storm and became Trinidad’s claim to global musical fame.

Ping pong was the name we initially gave to steelpan music and then to certain pans, notably the ‘tenor’. Angela Smith in her extremely well-researched Steel Drums and Steelbands: A History refers to a calypso, ‘The Beat Of The Steelband’ by Lord Kitchener in the ‘Bamboo to Steel’ section of the book, “Zigilee, Pops and Battersby/They coming with a semi-tone melody/When they start the contrary beat/They had people jumping wild in the street/ Port-of-Spain was catching a fire/ When the Steelband was crossing the Dry River/Zigilee leader of the ping-pong/ Had people jumping wild in the town.”

Selwyn Taradath in his ‘100 Years of Pan’ carried in the Trinidad Guardian on January 1, 2000 wrote, “The ping pong was a small hand-held pan cut from a paint tin or carbide container. The indentations made by striking it with wooden sticks were pushed upwards to form small bumps, which were then tuned to different pitch notes.” While Winston ‘Spree’ Simon is credited with inventing the ‘ping pong’, it was Anthony Williams, the most famous pan-tuner of all, who took it further forward. Ian ‘Teddy’ Belgrave, famous in his own right as a steelband historian and activist, wrote in 2008, “When Mr Williams discovered a used oil drum (among other discarded items in a dump which the Americans at the Naval Base at Chaguaramas had established) on the Mucurapo foreshore, he put notes on it and attempted to introduce it into the Sun Valley band. No one was interested in this. It was too heavy, he was told.

Sometime after, when the ‘Islandwide Steel Band Competitions’ began at the Mucurapo Stadium in 1947, the oil drum became the norm for the ping pong. The ping pong at this time still had only 12 to 15 notes, which could not include the chromatic scale. In the typical spontaneous style of this era, Mr Williams was one of the first tuners to include a semi-tone on the instrument when he attempted to play ‘Stardust’ and realised that in the very first bar of this piece, such a note was required.”

In my schooldays in Port-of-Spain around 1956 and later, with the Siparia Deltones steelband across the street from me, the ‘ping pong’, aka ‘steelband’, was part of my life. However, when I tried a ‘ping pong solo’, I was told by my friends in the band to stick to the soft drink ‘Solo’ and leave the ping pong alone.

I never did anything but beat the occasional iron and try, in the old days, the two-beat rhythm pan the ‘doodoop’. And this is how I ended up with the third and fourth ping pongs in my life. The third has been my lot for many, many years now, and means, “to move back and forth or transfer rapidly from one locale, job, etc, to another”. The fourth ping pong, though, is “a series of usually verbal exchanges between two parties”, and unlike beating ‘pan’ or playing tennis, it is something I am good at, but Indranie and the children are much, much better. They always throw me for a loop.

Tony Deyal was last seen talking about a girl he once encountered on the middle of a table tennis board. He knew her as ‘Annette’.