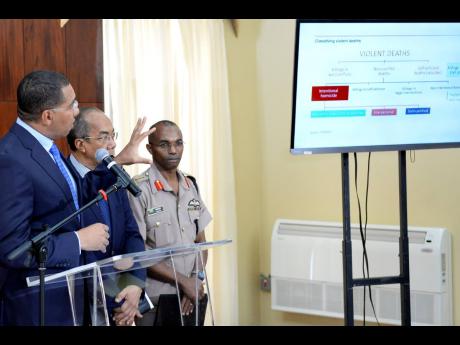 File Prime Minister Andrew Holness (left) points to crime data at a press conference at Jamaica House on Sunday, July 7, where he announced a state of public emergency for the St Andrew South Police Division. Standing beside him are Minister of National Security Dr Horace Chang (centre) and Chief of Defence Staff, Lieutenant General Rocky Meade.

For more than a generation now, Jamaica has endured a period of low economic growth and a very high rate of murders. GDP growth for the last 30 years averaged less than one per cent per annum, while the average annual murder rate has climbed above 45 per 100,000 of the population, putting Jamaica consistently in the top five of the world’s most murderous countries.

After 30 years, the population has seemingly come to accept these dismal statistics as the country’s fate. In other words, there is a normalisation of this poor national performance. The country appears to be living in the theatre of the absurd. The politicians pretend to do things that will drive faster growth and reduce murders, and the population, at large, knowing fully well that these measures will not work, pretend and hope they will. Expectations on both sides are low and cynicism is high.

All the expert reports on economic growth and crime in Jamaica show that the country’s high levels of violence, murder and corruption is suppressing GDP growth rates. The leadership of the country, on both sides of the political aisles, knows that faster growth requires real solutions to these problems. However, the anti-crime and anti-corruption strategies presented over the years confirm that there is a failure of imagination and leadership.

The suggestion by the prime minister that the country should be prepared to endure up to seven years of a state of emergency (SOE) as the main weapon in the fight against crime and violence is an admission of monumental national failure. What is deeply worrying is the silence of the major institutions of our liberal democracy in the face of this admission of failure.

An SOE is used to suspend rights and freedoms guaranteed under the Constitution in the face of natural disasters, national unrest, or external threats. In other words, in extraordinary circumstances. It was never intended to be used as part of normal policing.

Jamaica’s crime pattern that has existed for more than 20 years suggests deep and structural causes requiring long-term solutions. An SOE is not likely to be of much help, except as a breathing space to develop real and lasting solutions.

There is a great risk that after seven years of SOEs, further severe damage will be done to the police force as an institution. The 20-odd years of the Suppression of Crime Act, which was repealed in the 1990s, did a lot to undermine the police force. The Jamaica Constabulary Force (JCF) failed during the period to develop the intelligence and investigative capabilities necessary for a modern police service.

Under the Suppression of Crime Act, there was widespread abuse of the citizens’ rights by the police. This led to a marked decline in trust and support for the police. An extended SOE will likely have a similar result. The vast majority of the citizens impacted by the current SOEs are from the poorest areas.

An extended period of SOEs, as has been shown in other countries, Egypt, for example, will likely cause the population to come to accept the extraordinary suppression of rights as a normal way of doing business. This approach will weaken the foundations of our democracy.

There is absolutely no guarantee that the murder rate will decline after the proposed seven years. Most expert studies show that crime only decline in the long term when criminals are certain that the capacity of the police and justice system will guarantee, with great certainty, that they will be caught, prosecuted, and if guilty, sent to prison. This certainty will only come from a radically reformed police force, justice and prison system, with adequate resources.

Tackling Jamaica’s problem requires vision, strategy, resources and an iron will to succeed. It is a long-term endeavour that requires absolute commitment from the leadership of the country operating within national consensus.

Jamaica’s success with the current economic programme gives a blueprint as to how we can, as a country, tackle seemingly intractable problems.

The shadow-boxing between the Government and the Opposition around Vale Royal Talks, and whether an anti-crime plan exists, must cease. This must be replaced by an action plan with strategic, time-bound objectives.