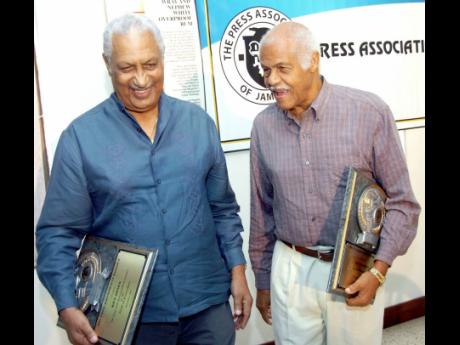 I must add to the litany of tributes to the late veteran journalist, humanist, sportsman, and friend, Ken Chaplin.

During a reception to celebrate his 80th birthday and his contribution to journalism, Ken Chaplin, following glowing tributes from friends and colleagues, professed that had he made half the effort serving his country to serving his God, he would be ascending to heaven on silver wings. Nearly 10 years later, reflections on his passing emphasise his enduring legacy and provide unqualified consolation that his eternal mission is secure.

I was assigned to the JIS Radio Department to produce features for the agency’s flagship programme, ‘Jamaica Magazine’. I recall, following my production and the airing of a feature (commemorating World Food Day), ‘The Navel String Connection’, Ken met me in the parking lot and said, “Excellent story! Maybe you should try writing for print. Print has legs, you know!”

From then on, he became my professional confidant and friend. I have never met anyone so deeply committed, clear minded, and modest in his impactful service and generous guidance. I took his advice and later achieved professional training as a print journalist.

Years later, I was seconded to act as press secretary to the prime minister, and I sought Ken’s guidance. Among the bits of advice he gave me was that my thoughts and opinions must never interfere with “packaging messages, clearly, factually and with precision”.

Later, he enquired, “How you doing?” I confessed that as a ‘non-political person’, I found the task overwhelming and would rather be a functionary in the newsroom. He responded that aversion to political activism may be a good thing. Professionalism, he advised, was a great asset and that this attribute would not be lost on the prime minister.

Upon reflection, it is easy to understand the ease with which he distinguished himself as press secretary to former prime ministers Hugh Lawson Shearer, Michael Manley, Edward Seaga, and P.J. Patterson. Perhaps even more far-reaching has been his contribution to the professional development of neophytes and the inculcation of ethical standards to those of us who were privileged to encounter his calming discretion, keen sense of discernment, and gentle disposition.

And so, while on silver wings the veteran soars to realms beyond, his profound legacy endures.

Allan Brooks is a journalist. Email feedback to columns@gleanerjm.com and agbrookx@gmail.com.