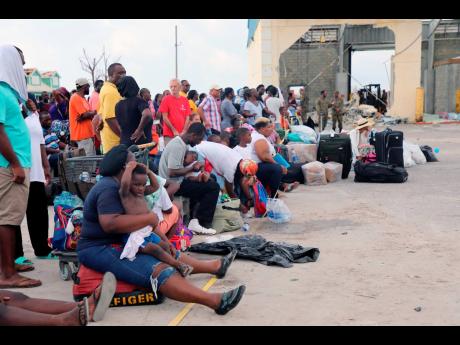 Gonzalo Gaudenzi
AP People wait in Marsh Harbour Port to be evacuated to Nassau, in Abaco, The Bahamas, on Friday, September 6, 2019.

The Government’s decision to dispatch up to 150 soldiers to The Bahamas, plus other Jamaican efforts, public and private, to provide relief to that country in the aftermath of Hurricane Dorian, present the kind of solidarity when neighbours are in trouble, as well as vindication of the functional cooperation arrangements with the Caribbean Community (CARICOM), of which both countries are members. Indeed, Kingston’s efforts, broadly, are taking place under the umbrella of the Caribbean Disaster and Emergency Management Agency (CDEMA), of which a Jamaican, Ronald Jackson, is the head.

Indeed, CDEMA – and the region generally – is quite good, and getting better, at preparing for, and responding to, these climate-related disasters. They, unfortunately, are being well practised.

Two years ago, for instance, CARICOM members Dominica and the island of Barbuda, as well as the CARICOM associate member, the British Virgin Islands, were ravaged by Hurricane Maria. The harrowing images from the Bahamian islands of Abaco and Grand Bahama suggest their devastation may be even worse. At least 43 people have been confirmed dead, but the Bahamian government fears the toll could rise to hundreds. It will require billions of dollars and many years for Bahamians to rebuild.

The problem, though, is that they, like many of the world’s citizens, facing climate disasters, might never have a chance at recovery. The events are happening too fast, too frequently and too ferociously. In other words, our planet is facing an existential threat from climate change. Yet, those who have contributed more to this crisis, and can do most to avert it, deny its existence, or that human beings are its cause.

For the deniers that climate change is primarily man-made, some facts are incontrovertible. Last year, according to the annual global report on the world’s climate, was the fourth warmest year on record, with average surface temperature, depending on the model used, being 0.3 degrees Celsius to 0.4 degrees Celsius higher than the average for the two decades from 1981 to 2010. In relation to extreme temperatures, there were more highs and fewer lows than in the nearly 70 years of such record-keeping. In this region, Jamaica had its highest annual average maximum temperature in the 47 years since it has kept such records. In the case of The Bahamas, they recorded their fifth highest annual average maximum temperature.

The world’s oceans, too, have grown warmer, reflecting, the scientists say, the continuing accumulation of thermal energy. One result is rising sea levels, which, in 2018, were up to 8.1 centimetres, or 3.2 inches, higher than the 1993 average. The global seas have been rising at an average of 3.1 centimetres (1.2 inches) per decade.

All these developments, and others, were in keeping with increasing levels of greenhouse gases in the atmosphere, which were at their highest since records started to be kept 60 years ago, as well as compared to records from ice core samples going back 800,000 years. Much of the sharp rise in greenhouses gases has happened since the industrial revolution, and is the major contributor to a nearly 1.5 degree Fahrenheit, or one degree Celsius, rise in the global temperature over the last 140 years.

In 2015, leaders from 190 countries, including America’s then president, Barack Obama, signed the Paris climate agreement, aimed at keeping the rise in the world’s temperature to below two degrees Celsius by the end of the century. That would require cutting back on their emission of greenhouse gases, including consuming less fossil fuels. Donald Trump, Mr Obama’s successor, and a climate change denier, tore up the agreement, believing it to be a conspiracy to stifle America’s economy.

America, per capita, is the world’s biggest polluter, and, by that measure, is the greatest contributor to global warming, which creates the environment for more frequent climate-related disasters like Hurricane Dorian and the drought now being faced by Jamaica.

Donald Tapia, Mr Trump’s new ambassador to Jamaica, recently arrived in Kingston. He should be called in for a note to his bosses about the dangers climate change spells for countries like ours.