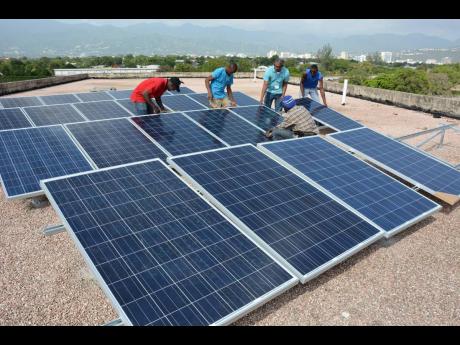 Today I would like to raise my voice in support of a reader. Dr John Lennon, a research chemist, born in England of Jamaican parents, now living in Montego Bay, has sent me copies of correspondence he has sent to several persons, ministries and agencies, but has not received a single reply!

He writes: “The cost of solar-generated electricity has crashed and the payback period for solar investment in schools is under four years (I have an estimate). However, Ardenne High estimated under a year: a $40 million investment would eliminate $4 million monthly bills!”

Indeed, in an article which I read, Ardenne High School, with over 2,000 students, 300 computers, and several air-conditioning units, reported having a monthly electricity bill of over J$4 million. The school implemented an energy-conservation plan, and then installed a number of solar panels to make them self-sufficient in energy; they now have plans to sell electricity to the national grid!

Jamaica has made a commitment to its citizens and to the global community, through the United Nations, to work hard to attain the 17 Sustainable Development Goals (SDGs) by 2030 – just 11 years away.

Dr Lennon writes: “Instead of using taxpayers’ money to indefinitely pay electricity bills, schools could service fixed-term loan agreements – with repayments lower than [their electricity] bills – to pay for their own electricity-generating facilities (SDG7). Schools would immediately have more money to spend on education (SDG4) and the fossil fuels would remain underground (SDG13). It would also impact other SDGs. It can be financed … without costing taxpayers a penny.”

Jamaica has more than 1,300 schools at various levels. Let us imagine with Dr Lennon that all those schools came off the national grid! This would reduce demand, meaning that we would burn less fossil fuels, save valuable foreign exchange, and emit less greenhouse gases which contribute to global warming.

For those readers who are unfamiliar with the SDGs, when schools have their own solar electricity-generation facilities, they will help the country achieve SDG7 (affordable and clean energy). The savings can be reinvested in education, helping Jamaica to achieve SDG4 (quality education). Reduced carbon (and sulphur) emissions into the Jamaican atmosphere would help the Government achieve SDG13 (climate action).

I find it hard to disagree with Dr Lennon.

He has received no reply from the PIOJ, the Ministry of Finance, the Ministry of Education, or the several other government entities and persons to which he has written. Shameful! If you don’t like his ideas, that is one thing; but not to reply is rude!

Dr Lennon asserts that the savings – and then the earnings – from this sustainable energy plan will reduce the amount of school fees, auxiliary fees, and the like that parents are asked to pay. He calls Jamaica’s current energy policy – which does not reflect his ideas – “unsustainable financial lunacy”.

Prime Minister Holness recently made a speech calling for action to combat climate change; Dr Lennon does not understand why this obviously good scheme, which is a win-win-win for the economy, the environment, and the Government, is being ignored.

Dr Lennon feels that if the general public knew of the savings and earnings that would result from his plan, and the fact that it is being ignored, “they would take to the streets tomorrow. We have socio-economic reasons to start the process tomorrow. This is an investment in education, the future of Jamaica and the planet. It must be considered”.

As I said, I am lending my voice in support of Dr Lennon. What is wrong with his ideas? Why is he being ignored? Take the schools off the grid, save millions, invest in the future, and save planet Earth!

Peter Espeut is a sociologist and an environmentalist. Email feedback to columns@gleanerjm.com.