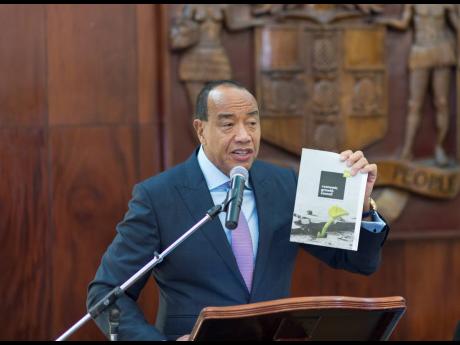 Assuming he wasn’t taking a cheap shot at senior civil servants for his inability to goad the economy to a five per cent growth rate by 2020, Michael Lee-Chin has, hopefully, reignited serious debate on what is required for an efficient public bureaucracy and how to make it accountable.

Mr Lee-Chin is a billionaire Jamaican-Canadian businessman, whose myriad global holdings include Jamaica’s National Commercial Bank, the island’s largest and most profitable financial institution. Mr Lee-Chin is also chairman of the Economic Growth Council (EGC), an agency established by the Holness administration, shortly after it came to office in 2016, with the mandate of, after 40 years of anaemic gross domestic product (GDP) performance, placing Jamaica on a path of fast growth.

Mr Lee-Chin’s mantra became ‘five-in-four’, representing his target of lifting an annual average growth rate of less than one per cent annually, to five per cent over four years or by 2020. That, unfortunately, won’t happen. For, despite the great strides Jamaica has made over the last seven years in fixing its macroeconomy, extracting significant growth, to this newspaper’s admitted surprise, has been stubbornly difficult.

After growth of one per cent and 1.9 per cent over the previous two years, the Planning Institute of Jamaica projects GDP to expand by 0.7 per cent for the current fiscal year, which ends next March – the casualty, mainly, of the medium-term mothballing of an alumina refinery that contributed nearly a half of last year’s growth.

But in one of his periodic reviews of the EGC’s work last week, Mr Lee-Chin placed the blame for the inability to rapidly accelerate growth, and meet targets such as he has set, squarely on the incompetence of public sector management, which he believes to be unaccountable.

“Until we fix this lack of accountability, there will be no public sector transformation, and it will be difficult to attain five per cent growth in four years,” he said.

His proposed solution, for which he urged bipartisan political support, is for change to laws that “protect non-performing permanent secretaries”, the civil service heads and accounting officers of ministries.

As an example of this presumed failure of accountability, Mr Lee-Chin cited the case of a project for the digital streamlining of permits for development projects, which, he said, was four years behind schedule for the lack of a project manager.

Mr Lee-Chin’s observations, however, raise several issues, not least of which is how deeply the EGC appreciated the complexities, in the absence of massive inflows of capital, of transformation of an open low-skilled economy with low all-round productivity.

There is, too, the likely perception among some permanent civil servants that they have been thrown under the bus, or being accused of sabotage, while the political heads of ministries are offered vindication.

While Section 93 of Jamaica’s Constitution places a ministry “under the supervision” of a permanent secretary, it is the minister who exercises “general direction and control” over its work.

It would seem to us that even with a permanent secretary with the skill for diverting ministers, as the fictional Sir Humphrey of the old British television series Yes, Minister, an engaged minister should be aware and be in a position to call a permanent secretary to account if his policies are going awry.

Further, while there is an obvious need, as Mr Lee-Chin said, for reform of the accountability structure of senior civil servants, it is probably a stretch to suggest that they operate without constraints, answerable to no one.

And they, like all permanent secretaries should be, are supposed to have work plans and subject to annual performance reviews by the head of the civil service, who, in Jamaica’s case, is the Cabinet secretary. Non-performers, if they can’t be readily dismissed, can be, on the advice of the prime minister, transferred from their posts.

There is a larger policy issue, though, which Mr Lee-Chin didn’t touch – the broader matter of public transformation, beyond making it easier to hire and fire permanent secretaries. This matter – including the size and structure of the public sector, the size and quality of the bureaucracy needed to manage a modern state, what that state should look like, and how the bureaucracy should be remunerated – has been on Jamaica’s agenda for more than two decades. It has been attended to in stops-and-starts, except, more recently, for keeping the public-sector wage bill to within nine per cent of GDP, as per our agreement with the International Monetary Fund.

It is perhaps opportune for Nigel Clarke, the minister of finance and the public service, to reopen this discussion.