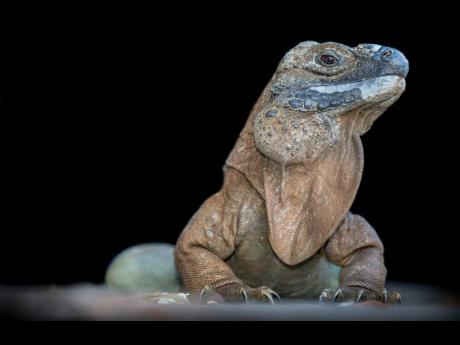 I welcome the plan to repopulate the Jamaican Iguana, Cyclura collei, on Great Goat Island as a sanctuary. This would not have been possible if a group of intrepid students and scientists (including yours truly) from the Botany, Geology and Zoology Departments of The University of the West Indies, the Institute of Jamaica, and other institutions had not ventured there in the summer of 1970. Their mission: to determine what plants and animals live there, and what the geological and environmental factors are for conservation of its unique flora and fauna.

One of the last virtually unexplored areas of Jamaica, the Hellshire Hills, has a rich flora and fauna – the Coney, the Manatee, Wild Hogs (introduced) the Yellow and Thunder snakes, and the almost mythical Jamaican Iguana, thought to be extinct due to the predation of mongooses (introduced to kill the yellow snakes) and men (Charcoal burners), the last sighting being in the 1940s.

Dr Jeremy Woodley, the team leader, a mild-mannered, soft-spoken but doggedly determined zoologist, mentioned in his 170-page survey Hellshire Hills Scientific Survey1970, that the Jamaican Iguana was hunted by the Pre-Columbian inhabitants of the island.

Dr Woodley: “Gwanas are very fat and good meat (Sloane 1725). They were frequently served in fricassees (Browne 1756)”… When attacked, iguanas would crouch with chin and belly close to the ground, open the mouth and hiss. When further provoked, they would lash with the tail and strike out with their front claws, once putting out the eye of a dog.”

In July 1970, Dr Woodley had contacted a man who hunted wild hogs by the name of E. Smith or Edwin Duffus. Brakes or Breaks, as he was called, walked with a limp, presumably from a badly healed broken leg. He claimed his dogs sometimes killed a “guana”. He had hung the carcass of one from a tree a year ago.

The expedition in 1970 consisted of nine camps in different areas. Stores of food and water were transported by land vehicle, air lifted by helicopter or by ship. The bush was very dense and thorny. Some members of the survey team were lost on several occasions in the first two or three weeks. The ground was rough with limestone crags, making it difficult to traverse. In the days, we were burnt by the hot blazing sun, and in the evenings and nights, plagued by hordes of mosquitoes.

FUTURE IN OUR HANDS

With the knowledge that a carcass existed, we had high hopes that the Iguana was not extinct. Venturing deep into the interior, we set up camp at Manatee Bay. Guided by Brakes, after much difficulty, we retrieved the mummified specimen. It was a eureka moment. We were elated. Here was the evidence. Well, not quite. A live animal would have been more conclusive. Undaunted, we pressed on. Unfortunately, the subsequent six weeks of the survey, no further evidence of the Iguana was found apart from an oral report from another hunter.

In August 1990, a live Iguana was discovered, when an adult male was chased into a hollow log by a dog belonging to Edwin Duffus in the Hellshire Hills. A remnant population was discovered soon after. Catching them can be dangerous as they can inflict serious scratches with their stout claws. A noose on a stick dropped over their heads is a favourite method which I have used on field trips in Cayman Islands.

The Hellshire Hills has scientific and educational value and should be designated a national park, a scientific reserve sufficiently isolated for the preservation of its natural habitats, free from exploitation. The Hope Zoo is now playing an integral part in the rehabilitating and releasing iguanas back into the wild.

Man is not only a hunter but also a tamer. He should also be a trustee of the animal world. No species has ever had such control over everything living on earth as we have. In our hands lies not only our future, but that of all living creatures with whom we share the Earth.

Dr Ethon Lowe is a medical doctor. Email feedback to ethonlowe@gmail.com and columns@gleanerjm.com.