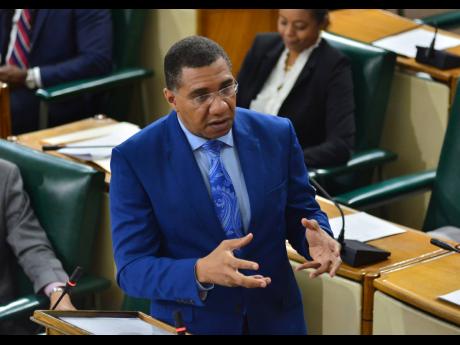 MANY PEOPLE have convinced themselves that the only thing the Government is good at is public relations. Some have implied, in their utterances, that the lot of us who are impressed by Prime Minister Andrew Holness and his team have allowed ourselves to be hoodwinked by the glitz and glamour of nicely done graphics and videos and their mastery of social media.

I must confess, it has been a struggle to keep up with the constant banter and complaints about the Government’s communication and public relations – especially in the last couple of months. Sadly, but not surprisingly, not one of the persons who bemoan about the public relations has been able to convince me of their arguments.

It is undeniable that the Government, especially the Office of the Prime Minister, has been doing a stellar job in utilising both traditional and social media since. We love to see it. It’s one of our expectations of them and a critical part of good governance. Government has to employ a variety of strategies to keep us informed. Of course, we also crave all the gimmicks, but what we need and value more, regardless of which political party we support (or don’t support), is actual work – the Government delivering on their promises and making Jamaica a better place.

As I have said elsewhere, the ‘Holness effect’ isn’t public relations. It merely amplifies it. If you listen to the discussions all over – in taxis, at the barber or hairdresser, in the bus, or the daily talk shows on radio – you see that people are paying attention, and they tell you what is being done and not being done. The recent RJRGLEANER Communications Group/Don Anderson Polls is enough evidence.

Focusing on PR is where everybody goes wrong. From my observation, over the past four years, the Jamaica Labour Party has been able to set themselves apart by:

1) Their seeming ability to consult and listen keenly to a wide range of stakeholders;

2) Making people feel they were listened to, that their suggestions are valuable, and acting on them;

3) Removing the blockage in the pipelines and implementing projects/initiatives with aggressiveness and alacrity; and

4) Giving us a cadre of political representatives who cut across party lines, especially those who have come on board in the last two or so years, like Nigel Clarke and Ann-Marie Vaz.

The truth about public relations is, no matter how savvy a PR strategist you are or how hard you try, you cannot PR nothing. If you’re a marketer in a company and the research and development team fails to develop products or improve existing ones, you won’t actually have anything to push in your marketing and public relations campaign to your target but the same old product.

Similarly, if there was no roadwork to give us better roads all across the country, no amount of carefully designed public relations campaign could convince us that di govahment a roll out cyaapet all across the Corporate Area.

Holness’ appeal is constantly being questioned, but too many people reduce it to public relations.

A NUMBER OF THINGS

From my non-expert vantage point, it’s a number of things.

To begin with, we first have to appreciate that he is one of the most relatable politicians at this time. Don’t underestimate him being called ‘brogad’. People connect with him and he connects with people. No matter what you do, people will relate to you in a particular way. Let’s call this the ‘Portia factor’. Importantly, both former Prime Minister Portia Simpson Miller and Lisa Hanna enjoy the similar respect, relatability and adoration. On top of that, we generally love our politicians as we do our pastors.

The other thing to note is that people (not saying everyone) feel Holness is in charge and relate to that in a particular way. You get the sense that he knows what’s going on and is steering the ship – no matter how rough the seas might be.

In addition, for many of us, we grew with Holness. We knew him when barely anyone saw him as a leader. When he wasn’t as charismatic. When we scoffed at him and said he’s unfit. We’ve seen the changes he’s made personally and politically over time. It’s like your friend from the community who later made it big. You shower them with praises.

Like Portia Simpson Miller, Holness has given many of us another quintessential Jamaican underdog story that we will celebrate for a while.

Many of us underestimated Andrew Holness and struggle to comprehend what it is about him that people find so appealing. One political commentator has compared him to Michael Manley and said, “he’s on the verge of becoming better than good”. I personally don’t think public relations is the cause for that.

To get a better sense of why he’s a crowd favourite, what we should be asking is, what is it about Holness that makes people on and offline respond to him in this way? What about him resonates with people? What is the source of the seeming trust and confidence that people have in him as a leader and politician?