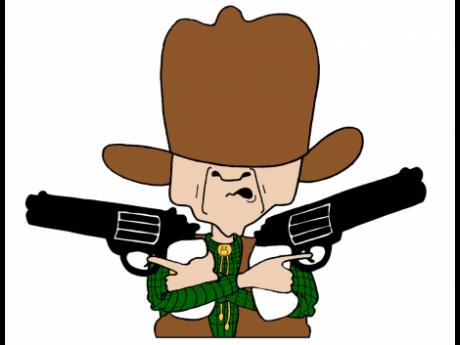 One of my teachers, Brother Anselm, had a great sense of humour and generally liked my quips in class. However, one day, tired of my antics, he warned me, “On a tombstone in Tombstone is written, ‘He kept asking for it until he got it’.” Despite getting into his bad books, I was lucky to grasp the meaning but not suffer the punishment that so many others experienced in Tombstone Territory, one of the Old West’s most notorious towns in which the Gunfight at the OK Corral took place and the Earp Brothers, with their sidekick, Doc Holliday, ruled the roost.

The only thing faster than Doc Holliday’s gun was his mouth, and his quips were legendary both in the films and real life. “My hypocrisy goes only so far,” he informed badman Johnny Ringo. When a weary Wyatt Earp confessed that all he wanted was “a little normalcy”, the Doc advised, “There’s no normal life. There’s just life. Now get on with it.” One morning after drinking and playing poker and the piano all night, Doc went to help Wyatt deal with two cowboys who wanted to free their leader from jail. One of them belittled Doc as “the drunk piano player”, declaring that Doc was so drunk, he was probably seeing double. Doc countered calmly, “I have two guns, one for each of you.” Even on the Doc’s deathbed, when Wyatt asked him how he was doing, Doc retorted, “I’m dying, how are you?”

Dying, or the threat of death, was what caused the town to be named ‘Tombstone’. It was a mining camp in the heart of Apache Indian territory, and silver miner Ed Schieffelin used an army camp as his base in his search for wealth. The soldiers in the camp kept asking Ed why he was so foolish to go into the dangerous Apache country every day. He answered, “To collect rocks.” One soldier then admonished Ed, “You keep fooling around out there amongst them Apaches, and the only rock you’ll find is your tombstone!” When Ed eventually struck it rich, he called his claim ‘Tombstone’, and it became the basis of the town and its name.

Every Western town or territory had its burial ground, or ‘Boot Hill’, adorned by tombstones. The tombstones in Tombstone, however, were different: “Here lies Lester Moore, Four slugs, From a .44, No Les, No Moore.” Another revealed, “ Here lies George Johnson, hanged by mistake in 1882. He was right, we was wrong. But we strung him up and now he’s gone.” Other Western frontier towns were no different. In the Boot Hill Museum, Dodge City, Kansas, there is the inscription, “Here lies a man named Zeke, Second fastest gun in Cripple Creek.” In Silver City, Nevada, another memorable tombstone reads, “Here lays Butch, We planted him raw. He was quick on the trigger, But slow on the draw.”

This kind of rhyming send-off was not restricted to the Wild West. In Battersea, London, there is “Owen Moore, Gone away, Owin’ more, Than he could pay,” and in Hartscome, also in England, “On the 22nd of June, Jonathan Fiddle, Went out of Tune.” From Oxford, we have Mr Meredith’s tombstone, “Here lies one, Blown out of breath, Who lived a merry life, And died a Merideth.” One of the toughest I ever read, though, was from the tombstone of Anna Wallace of Worcestershire: “The children of Israel wanted bread, And the Lord sent them manna. Old clerk Wallace wanted a wife, And the devil sent him Anna.” My favourite is the tombstone for the noted barrister Sir John Strange: “Here lies an honest lawyer — that is Strange.”

The play on names is not restricted to English tombstones, as this one from a grave in the 1880s in Nantucket, Massachusetts, demonstrates: “Under the sod and under the trees, Lies the body of Jonathan Pease. He is not here, there’s only the pod, Pease shelled out and went to God.” Others include, “Here lies Ann Mann, Who lived an old maid, But died an old Mann.” The one I passed on to all of my four children was, “Doctor Bell, Fell down the well, And broke his collar bone. Doctors should attend the sick, And leave the well alone.” However, lawyers and doctors are not the only source of tombstone humour. The tombstone of a dentist read, “ Stranger tread this ground with gravity, Dentist Brown is filling his last cavity.”

A Lighter Touch to Death

There are others where the wordplay adds a lighter touch to death: “Here lies the body, of Jonathan Blake, Stepped on the gas, Instead of the brake.” Many of us can sympathise with this seemingly hen-pecked husband: “I laid my wife beneath this stone, For her repose and for my own.” Then there is one that I use as an example that being right is not necessarily cause for ignoring danger, “Here lies the body of William Jay, Who died maintaining his right of way, He was right, dead right as he sped along, But he’s just as dead as if he’d been wrong.” I am sure there are a lot of Caribbean men who deserve the same send-off.

While tombstones tell you what others think of the deceased, famous last words, like those of Doc Holliday, can also be quirky. There are some that are obviously made up, such as, “My grandpa died the other day as nobody could figure out his blood type. But I won’t forget his last words. Be positive! Be positive!” There is the famous seer Nostradamus, who showed his ability to foresee the future with his final lines, “Tomorrow I shall no longer be here.”

Actor Humphrey Bogart might have been talking to the bartender in Casablanca when he complained, “I should have never switched from Scotch to Martinis.” James W. Rodgers, convicted murderer, told the authorities that his last request was for them to bring him “a bullet-proof vest”. Another convict, with the noose around his neck and standing on the trap door, wondered, “Is this thing safe?”

In 1966, the defiant James French, condemned to the electric chair in Oklahoma for murder, told reporter Bob Gregory, “If I were covering my execution, do you know what I’d say in the newspaper headline?” Gregory queried, “What?” French said with a laugh, “French fries.” Vic Morrow, the actor, quipped, “ I should have asked for a stunt double.” But the one I like best is when the priest at his deathbed gave the option to Voltaire, the philosopher, of denouncing Satan before he died. Voltaire replied, “Now is not the time for making new enemies.”

Tony Deyal was last seen admitting that he admired the unknown carouser who demanded that his tombstone should read: “A victim of fast women and slow horses.” Send feedback to columns@gleanerjm.com.