Trevor Munroe | More needs to stand up to have more accountability 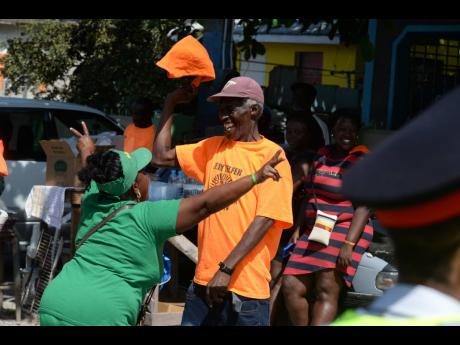 It is more than time for more of that 59 per cent to join the fight if we are to catch the corrupt.

Almost all of us have recited this commitment in our National Pledge: “I promise to stand up for justice …”

To stand up for justice is to demand accountability, to make what is wrong right.

Over many years, many of us have been standing up: journalists who do investigative work; talk show hosts who call it as it is; columnists who speak truth to power; whistle-blowers in ministries, departments and agencies; our law-enforcement officials; and, most of all, ordinary citizens who make social media posts, write letters and call radio programmes. That is why we are getting some accountability, but this is far from enough. To get more justice, more of us need to stand up.

• So because so many spoke out, J.C. Hutchinson is now relieved of the responsibility for agriculture, but because not enough stood up, he is transferred to the Office of the Prime Minister.

• So, too, Michael Belnavis has resigned as mayor, but remains councillor in St Ann.

• Richard Azan resigned as a minister in 2013 but was returned to Cabinet a few months later.

• The Government, in October 2019, withdrew proposals to keep Cabinet documents secret for 70 years but the 20-year secrecy remains and the Official Secrets Act has not been repealed.

• Andrew Wheatley was removed as a minister in July 2018 but may likely return to the Cabinet.

• Trafigura was exposed and Minister Colin Campbell resigned in 2006 but we still don’t have a transparent court hearing.

• The proposal to impose a tax on withdrawal for bank deposits in 2014 was withdrawn but bank fees remain too high on the back of the people;

• Prime Minister Andrew Holness proposed to appoint the chief justice to act for an indeterminate period without disclosed criteria for appointment but that proposal was withdrawn and the chief justice installed.

• Political favouritism and cronyism were disclosed in successive contractor general reports, most recently in Lisa Hanna’s constituency, but they remain rampant.

Standing up does bring some results; more standing up will bring more results. More standing up will ensure that the scores of public boards that routinely break the law by not reporting to Parliament what they have done with our money and are not held to account would change.

The Code of Conduct for government ministers would be more consistently applied. That code states that: “Ministers must ensure that no conflict arises or appears to arise between your public duties and your private interests.”

The Policy Framework and Procedures Manual, which states that the divestment of government-owned lands “shall be based on a system of equity, accountability, integrity and transparency”, would be enforced.

• Prime Minister Holness, in February 2016, said: “There is only so much trust that pledges and statements of commitment can buy… Jamaican people want to see action in building trust ... there is no doubt that significant numbers of Jamaicans have lost hope in the system.”

• Prime Minister Portia Simpson Miller, in March 2012, said: “I … pledge to the Jamaican people to work tirelessly to eradicate corruption and extortion … I am committed to their eradication.”

• Prime Minister Bruce Golding, September 2007: “What are to be the priorities of our Government … transparency and accountability in government and the elimination of corruption … corruption in Jamaica is much too easy, too risk-free … we intend to impose criminal sanctions for breaches.”

Thirteen years after that pledge, because witnesses came forward, investigators did meticulous work, prosecutors applied professional skills, convictions were attained and criminal sanctions are about to be applied in relation to some of those guilty of stealing over $400 million from the Manchester Municipal Corporation. But what about so many other cases where public officers have wealth that cannot be explained by their legal sources of income? These often well-connected and prominent individuals ought to be brought to justice as well.

So it is good to know that in 2019, 73 per cent of Jamaicans believed that ordinary people can make a difference in the fight against corruption and 59 per cent would be prepared to help in that fight. That 59 per cent would have to be coming from all walks of life – from many Jamaicans who support the People’s National Party (PNP) or the Jamaica Labour Party (JLP), as well as from those who have no partisan loyalty.

It is more than time for more of that 59 per cent to join the fight if we are to catch the corrupt, save billions of dollars of public money that are going into their pockets, and be better able to cushion the hardships arising from job losses, businesses shutting down and more people not being able to put food on the table arising from the COVID-19 pandemic.

So we need to constantly show doubting Thomases that speaking out does bring results and more speaking out will bring more results.

Those of the 59 per cent who are justifiably fearful of victimisation must know that they can report wrongs without giving their names or telling who they are to Crime Stop, the Integrity Commission, to the Office of the Auditor General, to the MOCA.

On our side, we need to amend the Protected Disclosures Act (the whistle-blower law) to give more protection to those in ministries, departments and agencies, as well as private-sector businesses who want to tell what they know but are afraid to do so. We need to remind our investigators of the strong recommendation in Jamaica’s National Security Policy, that is, Ministry Paper No. 63 (2014), which states “focus has to shift from street level criminals to the top bosses … that is, the facilitators … the politicians, lawyers, real estate dealers,” etc.

Our policymakers, all of us who want to see economic recovery from the COVID-19 downturn, should heed warning from the International Monetary Fund to us in Jamaica in May 2019, that “there are serious shortcomings in the governance of public bodies … Jamaica fares relatively poorly on corruption related measures … and public corporate governance with potentially significant implications for growth … weak governance and corruption can… undermine macroeconomic and financial stability, private and public investments and the rule of law”.

In our various ways and from all corners, the 59 per cent must not only be prepared to but actually get involved in the fight against corruption.