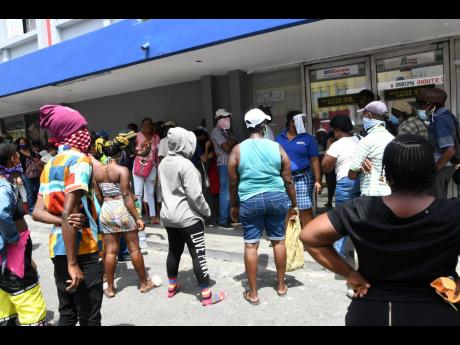 File
The Government’s CARE programme to alleviate the pressure on our people totals $15 billion and has, commendably, benefited approximately 440,000 Jamaicans. Were we able to cut even half of the theft by the white-collar corrupt, the Government would have been able to multiply that relief package three times over.

Last November 2019, almost 40 per cent, a plurality, of our people indicated that the most significant sign that Jamaica is on the right track with regard to fighting corruption is “seeing big fish successfully prosecuted and assets confiscated”.

So far, our people have waited in vain for that sign. The continued failure to catch big fish is having serious consequences for continued high rates of crime, for billions of dollars of losses of funds that could be devoted to relieving hardship on our people, and for growing disillusionment with our democratic system.

We have been warned repeatedly year after year of these consequences. For example, 27 years ago, in 1993, the report of the National Task Force on Crime, chaired by Mr Justice Wolfe, told us “until people begin to feel that all persons are equal before the law … crime will continue to flourish … the curtailing of white-collar crime is as important as the curtailing of gun crimes”.

We have not flushed out the perpetrators of white-collar crimes, while relatively petty criminals have felt the full force of the law. Take one of many examples: on November 25, 2011, the headline in The Observer read: ‘Man gets three months for stealing GG’s ackee’; the ackee was valued at $350. Or the recent shocking cases of persons arrested for minor offences like possession of a ganja spliff and then, like Walter Blackstock, spend 31 years behind bars as ‘unfit to plead’.

What about the white-collar corrupt during those 30-odd years? How many days, much less months or years, have those white-collar contractors spent in prison? Were they not identified in successive auditor general’s reports for repeated breaching of procurement law?

Our people are not blind. No wonder 17 years after Justice Wolfe’s observation, a UNDP survey found that a majority of Jamaicans believe that the politically connected and powerful criminals go free.

Because the corrupt are not jailed nor made to return their ill-gotten gains, Jamaican people, at a minimum estimate, are losing approximately $95 billion each year that could otherwise go to relieve the hardships on the backs of our people.

Let us be concrete: the Government’s CARE programme to alleviate the pressure on our people totals $15 billion and has, commendably, benefited approximately 440,000 Jamaicans. Substantial as that has been, for most beneficiaries, the money is almost running out. Were we able to cut even half of the theft by the white-collar corrupt, the Government would have been able to multiply that relief package three times over.

Or take the total $129 million in the 2020-2021 Budget for the school-feeding programme. We could increase that over 300-fold if we were able to stop $45 billion from going into the pockets of the corrupt.

Successive auditor general reports, on Petrojam alone between 2007 and 2018, found frequent contraventions of procurement law in the award of contracts amounting to over $400 million. Had the culprits been forced to pay back this stolen money, how much more could the National Parenting Support Commission (NPSC) have been allocated beyond the less-than $50 million to strengthen the NPSC’s crucial parent-training programmes; or, for that matter, to multiply the paltry $20 million given to support youth development projects?

Towards that critical objective, we must:

• Call for and help to reinforce the professionalism and competence to deal with the sophisticated white-collar corrupt of our police investigators, our prosecutors and our judges. Also, to improve the investigative techniques of our journalists. Happily, the number of such seminars to which NIA, international partners and others have contributed and given support has been growing over the years. Results are beginning to be evident in the successful prosecutions of the corrupt in the Manchester Municipal Corporation and media exposures relating to breaches of high-ranking officials.

• Ensure that Government increases the human and financial resources allocated to the departments and agencies on the front line of the battle against white-collar corruption. In this regard, the budgets of the MOCA, FID, CTOC, ODPP and the Integrity Commission must be expanded. Significantly, the number and remuneration of prosecutors in the ODPP has been increased, and that trend must continue.

• Insist on taking steps necessary to strengthen the independence and, at the same time, the transparency and the accountability of law enforcement and justice sector institutions. In this regard, the long-overdue regulations to complete the autonomy of MOCA must be promptly completed and passed by the Parliament. Similarly, the recommendations from the Integrity Commission to broaden the coverage of the Statutory Declaration to include disclosure of beneficial interest in companies by public officials must be accepted.

Regarding the Judiciary, the pioneering Sentencing Guidelines and Guidelines for Conduct should be incorporated into the letters of appointment.

Private-sector organisations, civil-society bodies, professional associations, youth and student organisations and the ‘man in the street’ must insist on these measures being taken. In this way, we shall be able to raise the conviction rate for the major white-collar crime of ‘illicit enrichment’ from approximately 17.1 per cent. To the extent that we stand up for these measures, we shall be able to change facts like “for calendar year 2018, there were 20 prosecutions and six convictions related to money laundering” (US State Department of State International Narcotics Control Strategy Report Vol 2, March 2020, page 127).

With these measures, we shall be able to get rid of the conclusion, repeated every year by our international partners: “Jamaican law penalises corruption, but in practice … the judicial system has a poor record of prosecuting corruption cases against law-enforcement and government officials …” (INCSR 2020 Vol 1, page 173).

Most of all, we shall free up billions of dollars to alleviate our people’s hardship, start to send the white-collar corrupt to jail, thereby begin to arrest declining respect for the rule of law and, as well, improve confidence in our democratic institutions.