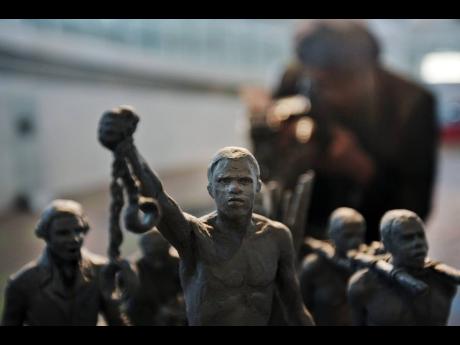 AP/ File
A man photographs a maquette of a statue at City Hall, London.

On August 1, anglophone Caribbean nations commemorate Emancipation Day, marking the 1834 abolition of slavery in the British Empire and the 1838 abolition of apprenticeship, a system that forced formerly enslaved people to continue to work uncompensated for their former masters. Emancipation was not a gift. The Slavery Abolition Act, which banned slavery in the British colonies, followed a shift in the British Empire’s economic interests and sustained resistance by enslaved people through massive slave revolts, like Bussa’s Rebellion in Barbados, and guerilla warfare, as in the case of Jamaica’s Maroons.

While resistance helped pave the way for emancipation in the 1800s, the Caribbean was not free from British colonial rule for another century. For centuries, Caribbean people fought for liberation from slavery and colonisation. Today, amid new calls for the United Kingdom (UK) to tackle systemic racism and reckon with the crimes of the British Empire, Caribbean people are still fighting for justice and repair.

On July 6, the Caribbean Community (CARICOM) Reparations Commission reignited calls for reparations for slavery and colonisation, emphasising the impact of the legacy of British colonialism on life and legislation in the Caribbean today. The commission, established in 2013 to prepare the legal and ethical case for reparations payments for CARICOM member states, lays out a 10-point plan for European former colonial powers to provide reparatory justice for slavery and colonisation. The first step in the commission’s plan is a formal apology for slavery. To date, the UK has expressed “deep regret” for its role in the Transatlantic Slave Trade but has never formally apologised. A full apology is an important step not only for atonement, but also because it is an opportunity to acknowledge and examine the contemporary effects of the British Empire’s abusive practices in the Caribbean.

British slave traders kidnapped an estimated 3.1 million people along the west coast of Africa, trafficked them across the Atlantic Ocean, and subjected them to forced labour and torture on the colonial plantations that enriched the British crown. British colonial legislation codified racial difference between the white planter class and enslaved Africans and regulated slaves’ behaviour through harsh slave codes. Slaves were denied access to land, education, or any means of social and economic advancement. CARICOM Reparations Committee Chair Professor Hilary Beckles has noted how severe neglect by British colonial authorities of the human development of black populations in the Caribbean led to rampant illiteracy and serious health issues across the region, which continued after emancipation.

Black populations in the Caribbean were also denied political and economic autonomy. Under British colonial law (as in the United Kingdom until the early twentieth century), the right to vote was predicated on a man’s wealth and landownership. In the Caribbean, this effectively excluded the poorer, landless black majority from voting for more than a century after emancipation. Without the right to vote in elections, black populations were subjected to the legislative whims of the white upper classes and denied representation in government without the ability to hold political authorities accountable. Universal adult s in the Caribbean was not achieved until 1944, first in Jamaica and then spreading to other Caribbean islands between then and 1962.

Colonial legislation safeguarding the wealth of the white British planter class, through the control and violent exploitation of black African labour, cemented the deep racial and economic inequality that persists across the Caribbean today. In Barbados, for example, formerly enslaved people and their descendants were excluded from purchasing land under the colonial Contract Law. The effects of the law continued after independence, and by 1970, an estimated 77 per cent of land in Barbados rested in the hands of the wealthiest 10 per cent of the country’s landowners.

Some British firms that were enriched by the Transatlantic slave trade have apologised, and some, like insurance company Lloyd’s of London, have agreed to make financial contributions to organisations supporting black and ethnic-minority communities. The British government, however, has previously dismissed and derailed calls for reparations for slavery and colonisation. In 2001, the British delegation to the Durban Conference on Racism, Racial Discrimination, Xenophobia and Related Intolerance blocked an outright apology for slavery by the European Union, despite support for the apology from some other European delegates.

During a 2015 visit to Jamaica, former UK Prime Minister David Cameron rebuffed calls by the Jamaica National Commission on Reparations for the UK to pay Jamaica reparations, stating the country should “move on”. Instead of reparations, Cameron announced that the UK would spend £25 million to build Jamaica a new prison. Cameron’s offer was particularly pernicious considering the history of unlawful detention and excessive use of force by the Jamaica Constabulary Force, which is heavily influenced by colonial laws designed to enforce a racist and exploitative colonial social order.

The British empire’s brutal trafficking and abuse of enslaved Africans throughout the Caribbean, and the continued exploitation of their descendants during colonialism, helped form the basis for the mercantile wealth that built modern British society. Despite this, Caribbean people have been routinely denied remedy for past injustices and continue to feel the effects of colonisation, as well as suffering abuses at the hands of the British government in the United Kingdom today.

As we commemorate the end of slavery in the Caribbean, we must not forget that the region is still in need of justice and repair. If we are truly to “move on”, the British government should acknowledge the extent of abuses committed during slavery and colonisation and begin the conversation on the contemporary ramifications of past harms by the British Empire.