Michael Abrahams | Why are dreadlocks still an issue? 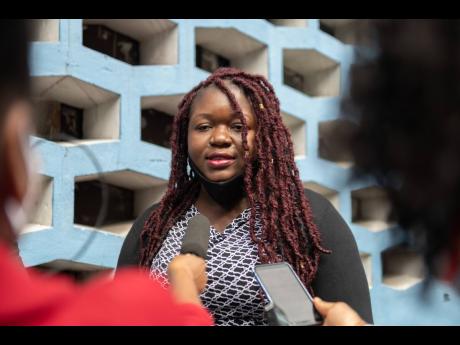 Gladstone Taylor
Sherine Virgo speaks with the media outside the Supreme Court in Kingston on Friday July 31, 2020, following the verdict in a case where her child was denied attending Kensington Primary School as a result of having dreadlocked hair in 2018. The court ruled that the school’s action was not unconstitutional.

Why are we still having conversations about discrimination about dreadlocks in well into the 21st century?

In 2018, Chikayzea Flanders, a 12-year-old boy, was put into isolation on his first day at Fulham Boys School in West London because his dreadlocks did not comply with uniform rules. The administration of the school refused to admit him unless his hair was cut. However, after legal action by his family, the Church of England school was forced to reverse their decision and ordered to pay compensation.

Later that year, New Jersey teenager Andrew Johnson was ordered by a referee to cut off his dreadlocks before a wrestling match or forfeit the event. He complied and later won the match.

Earlier this year, in Texas, 18-year-old DeAndre Arnold, who has been growing his dreadlocks since he was in the seventh grade, was informed that he would miss out on his senior prom and his high school graduation ceremony if he does not cut his locks.

Six-year-old Clinton Stanley Jr never made it inside his first-grade classroom at A Books Christian Academy in Orlando, Florida. He and his father were stopped at the entrance by an administrator and told that he would have to leave and cut his hair as dreadlocks were banned at the school.

Adults are having issues too. Chastity Jones, an Alabama woman, had a customer service job offer rescinded because she refused to cut her locks. Jones appealed her case up to the US Supreme Court which declined to review it.

The above-mentioned incidents took place in the United States of America and the United Kingdom, predominantly white countries with histories of enslaving black people. In Jamaica, with our predominantly black population, and popular dreadlocked icons, such as Bob Marley, we have overcome such discrimination. Right?

In 2018, a five-year-old girl with ‘locks’ was initially accepted to Kensington Primary School in Portmore, St Catherine, but her parents were informed that she would not be allowed to commence classes if her hair remained in that style. The principal voiced concerns regarding hygiene and ‘lice issues’, which is nonsensical, because any kind of hair can be clean or dirty, and head lice infestation has little to do with hygiene. According to the Centers for Disease Control and Prevention, “Getting head lice is not related to cleanliness of the person or his or her environment. Head lice are mainly spread by direct contact with the hair of an infested person.”

The child’s parents refused to cut her hair, and the Supreme Court granted an injunction against the board of management at the school, allowing the child to be admitted without having to trim her locks. However, on July 31, 2020, on the eve of our Emancipation Day, the Supreme Court ruled that the constitutional rights of the child were not breached in 2018 when she was initially denied access to the school.

The written judgment has not yet been released, but regardless of what the document will state, that day was a sad one for Jamaica. The fact that we are even having this discussion is an indication that although the shackles have been removed from the necks, wrists and ankles of our forefathers, many of us remain mentally enslaved. Afrocentric hairstyles such as dreadlocks, Nubian knots and Afros continue to create discomfort, while Eurocentric ‘dos are embraced.

There are still pockets of resistance to expressions of our ethnicity. A nurse friend of mine was called up at her workplace and told that her Nubian knots were “inappropriate for work”, this while she sits at the nurses’ station with other black women with processed and false hair. Another friend took a school board to task for policing her black son’s hair, demanding that it be kept below a certain height, while Caucasian and Hispanic boys, and those of Asian descent, were allowed to wear their hair longer. A colleague’s son was told that he would not be able to attend his graduation ceremony if he did not cut his Afro.

Last year, in America, California Governor Ron Newsom signed a bill barring discrimination against natural black hairstyles, including dreadlocks and braids, in schools and the workplace in that state. Blacks make up only six per cent of California’s population; 92 per cent of Jamaicans are black.

It is shameful that in my country an issue such as this has reached the Supreme Court. Our laws and constitution require urgent re-examination.