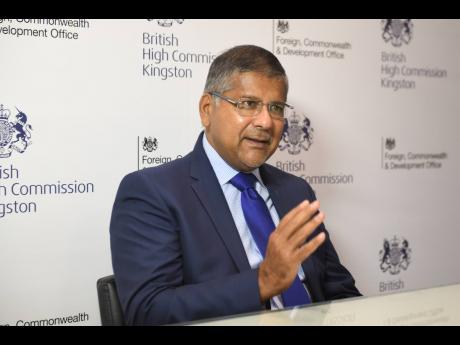 Last week, I listened to an interview with the British High Commissioner to Jamaica H.E. Asif Ahmad. He was talking about the potential for increasing trade between Jamaica and the United Kingdom (UK) in goods and services. Of course, on January 1, 2021, whether or not the UK has concluded a trade agreement with the European Union (EU), the transition period will be over and the UK fully exits the EU. This means that the Caribbean Forum (CARIFORUM)-UK Economic Partnership Agreement (EPA), the trade agreement, will take effect.

In my article of June 24, I wrote about the Caribbean’s Trade with Europe (UK and EU) moving into a new era. That era begins come January. In this article, I highlighted the decline in trade between the UK and the Caribbean with the main traders now being the Dominican Republic and Trinidad and Tobago. The Caribbean had moved from having a trade surplus to a deficit. Of course, with the 2020 COVID-19 impact, the deficit is expected to be even larger, not only in goods but also in services, primarily tourism-based.

I agree with High Commissioner Ahmad that Jamaica and, indeed, the rest of the Caribbean, need to be looking at how to increase exports to the UK making the best use of the trade agreement. The UK, given its current situation, is also interested in strengthening trade relations, although there seems to be a view that the UK economy is mainly driven by domestic and regional trade. Hence, having a free trade agreement with the EU should be critical.

Emphasising the need to strengthen external trade, in October, British Prime Minister Boris Johnson announced the appointment of Member of Parliament Darren Henry as trade envoy to the Commonwealth Caribbean. I am not clear whether this nomenclature actually means CARIFORUM, including the Dominican Republic, Haiti and Suriname, or just the English-speaking Caribbean. Mr Henry’s mission, I assume, will be to promote trade between the Caribbean and the UK working with the new Foreign, Commonwealth and Development Office and the Department of International Trade.

It seems building climate resilience will be a priority for Mr Henry with the 26th UN Climate Conference scheduled to be held in Scotland in November 2021. Addressing the virtual 12th Caribbean Renewable Energy Forum, October 28-30, Mr Henry said that the Department of International Trade will continue to work with the Caribbean states and the private sector to promote opportunities arising from and supporting climate adaptation. He noted that partnerships between the UK, multilateral bodies and the Caribbean countries already have had a direct impact on climate resilience in the region.

Hopefully, Mr Henry will also be focusing on stimulating trade flows. I gather the UK is interested in doing business with the Caribbean as a region.

DEMAND FOR CARIBBEAN GOODS IN UK

From my reading, it appears that a new generation of chefs with Caribbean heritage are making Caribbean cuisine more mainstream in the UK and there is increased demand for Caribbean foods. The UK Caribbean food market is apparently now worth about £100 million. Caribbean foods, sauces, condiments, roots and tubers, teas, gluten-free flours are cited as an emerging trend by some of the major food chains. The question is how do Caribbean countries access this market and ensure that they benefit from this trend? This is the role of regional trade promotion agency, Caribbean Export, working in collaboration with national trade promotion agencies, such as Jamaica Promotions Corporation (JAMPRO), and the private sector.

I note there is also a demand for cosmetics, hair and skincare products.

The Caribbean countries must be able to produce high-quality products which meet required standards at competitive prices. They must be reliable suppliers of quantities demanded. The importance of intellectual property rights must also be recognised.

Many of the food items and other products from the Caribbean can be produced in larger tropical countries in Africa, the Middle East, and Latin America. Note that the largest supplier of avocados to Britain has been Israel. Is this the time for Caribbean countries to consider collaborating to service the export market?

INTEREST IN THE OIL INDUSTRY

It seems the UK, through Scotland, also has interest in the oil industry in Guyana. Georgetown, Guyana, recently twinned with Aberdeen, Scotland, to strengthen relations. Aberdeen is the centre of oil production in the UK.

A recent positive development in trade in services has been the opening of Jamaica National’s full service bank in London in October.

High Commissioner Ahmad, in his interview, indicated that there was further potential for trade in cultural services, for musician, hairdressers, and cosmologists. I do not recall, however, that he mentioned the need for entry visas. Nationals of the Dominican Republic, Guyana, Haiti, Jamaica and Suriname require visas to enter the UK. Jamaica is the only Caribbean country which requires entry and transit visas. Also, it is necessary to be familiar with the needs requirements of the services schedules in the CARIFORUM-UK EPA.

Development aid from the UK, in the past, was provided bilaterally and through the EU. Now aid will be bilateral only. When the British Government announced the merging of the Foreign and Commonwealth Office with the Department for International Development in 2019, High Commissioner Ahmad did not think this would impact aid to the Caribbean. The merger occurred in September 2020.

Now it is reported that the UK has reduced its development assistance from 0.7 per cent of gross national income to 0.5 per cent. This reduction announced by the Chancellor of the Exchequer (Finance Minister) Rishi Sunak in November led to the resignation of Baroness Liz Sugg, Minister of Overseas Territories and Sustainable Development, in protest. She felt that it was fundamentally wrong to abandon the UK’s set commitment to development support. Whether this will affect the Caribbean is to be seen.

The UK did announce in June a trade partnership programme for the Caribbean to be delivered through the International Trade Centre and Caribbean-Export. They also provided £5 million to help the Caribbean with the impact of COVID-19.

Best wishes for Christmas and the New Year.