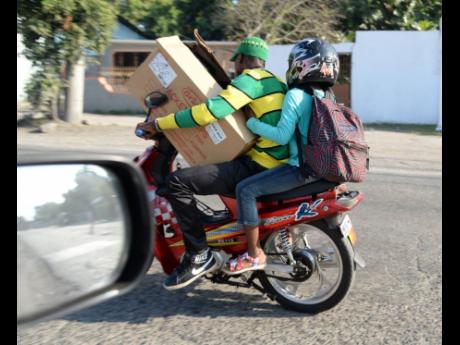 File
In this 2016 file photo, two men are seen riding a motorbike, trying to manoeuvre the traffic and balance the box on his lap at the same time.

“How you mean, man, everybody affi know seh a me dat!” This was Jango’s emphatic reply to my query as to why he felt it was an absolute necessity for him to modify the exhaust system of his new yeng-yeng to make the loudest sound possible.

He had come to beg money to insure the bike, his first big ‘step-up inna life’. He had really wanted a car – to run as a taxi, of course – but he had heard, mistakenly, as it turns out, that since he was “slow with the reading”, a driver’s licence would be difficult unless one had money. Anyway, the microlender had ‘hitched’ on the amount of available credit (for which he is obliged to pay one per cent per week), so the motorcycle was the affordable (?) option.

His ambition was a to work at one of the fast-food joints that deliver “COVID food”, attract attention to himself by emitting noise to rival any 18 wheeler rig and on a Sunday - to show skill with his bike posse on the Hellshire Road.

He had it all figured out, except for placing the picture of a naked white girl “with tall hair” on the side of the gas tank – and the insurance. “Is a lawful business dis,” he insisted.

In Jamaica, the smallest vehicles make the most noise and ‘a no nuttin’. I am nothing unless I can make a statement about myself. After all, where I come from, no one else will, so my recourse is intentional, if superficial, ego-boosting. It happens in the political arena, too.

By the way, Jango is a lesser-class clone of we guys with the $17-million ‘crissas’. He has no subjects, but he learns fast. What else is the good life about?

My efforts to persuade him not to modify his noise machine fall on deaf ears. “Look pon your big cyar. A no you dat?” he chides and then, wistfully, “A one bigger dan dat I want when I get through to go ‘up so’,” he points to where he thinks America is.

Houston, we have a problem! Jango’s exercise of freedom becomes everyone else’s nuisance and discomfort. Check the people who live on the ‘front page’ of any thoroughfare – Mona Heights, Newcastle Road, and all over.

Jango’s values and self-perception have huge national consequences. The social deficit, more than Nigel’s Budget, is what is holding back Jamaica’s recovery. Many of us, lacking any developed conviction about the common good, feel no compelling desire to live, have various relationships, work, earn, ‘tek’ and spend in a way that respects the rights and reasonable convenience of all others.

Jango is basically a very good ‘yute’ – just going along with the flow of national hedonism. I met him after a fire destroyed one of the homes for the elderly men run by the Missionaries of the Poor in Southside. He, and others like himself, careless of their own safety and with no promise of reward, had helped to lift the inmates away from the flames and certain death.

He sees no dissonance between that impulse of altruism and his nonchalance about making life miserable for countless others with his machine. “Hey, Chief, whey yu a talk ‘bout noise an dangerous riding? You a no police! Just bus’ me wid the insurance money, nuh.”

The police, incidentally, have obviously given up. Thousands of bike riders across the land: with no helmet, no licence, no competency test, no insurance and no knowledge of, or respect for, the Road Code.

Check the situation on the roads – a microcosm of values and relations in the land. Can you build a productive, inclusive, peaceful and prosperous nation without a culture of discipline and order – one that is very different from the practice of arbitrary repression to which we habitually revert?

Jango went to Holy Family School and a lesser-known high school where, in his sporadic attendance, his attention was more on the girls than anything the teacher said or did. Would equal or more attention to character formation than ‘subjects’ have been better for him – and us ?

But hold on. As a society, are we even clear about the behaviour traits essential to our common life, to help people like Jango to really ‘step up inna life’?

The poor Government is impotent. When I asked Minister Montague in Parliament last year why wasn’t the law against noise nuisance enforced, the reply was to the effect that when the yeng-yengs came for certificates of fitness, the authorities would insist on exhaust noise being corrected.

Well, that’s a serious joke. How about a calm, profound discussion about what constitutes mental slavery; how to build social capital better, how to link freedom and order; and how to help Jango validate himself in ways that won’t trouble others. How can we introduce, without cruelty, the broken-window theory in policing.

You may think road noise and chaos are minor matters. Maybe they are, in the larger scheme of things. But correcting them would undoubtedly stimulate bigger changes.

Until then, ‘Lumpenism’ rules. As he roars off, dilly-dallying across North Street.