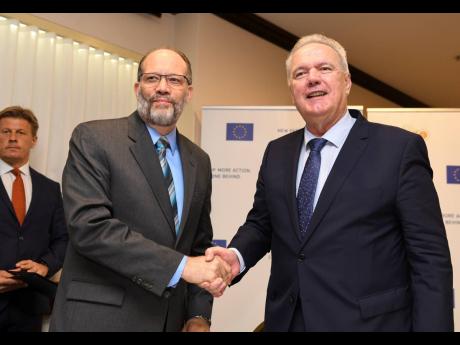 In February, I had wondered whether a member state of the Caribbean Community (CARICOM) would be able to nominate a candidate for the post of secretary general of the United Nations Conference on Trade and Development (UNCTAD). Now it seems that CARICOM will be seeking a new secretary general to head its own regional body.

In his opening remarks at the 32nd Intersessional Meeting of CARICOM Heads of Government, the chair, Prime Minister Keith Rowley of Trinidad and Tobago, mentioned that the tenure of Ambassador Irwin LaRoque would be concluding in August. He commended Ambassador LaRocque for his unwavering commitment to regional integration.

This, to me, signals that Secretary General LaRocque will be demitting office in August. He has been in the post since 2011 and has served two five-year terms.

In the communiqué of the 32nd Intersessional Meeting (February 24-25), there is no mention of the secretary general demitting office and of the start of a selection process for his successor. Ambassador LaRocque will still be in office July 5-6 when the 42nd Regular Conference of CARICOM Heads will be held, chaired by Antigua and Barbuda. I assume that at that conference, the matter of his departure and replacement will be more formally addressed

Sir Edwin Carrington, who had been secretary general, demitted office in December 2010. In 2011, Senator Maxine McLean of Barbados, then minister of foreign affairs and foreign trade, was appointed to head a selection committee for the new secretary general and the post was widely advertised. It could be that Deputy Secretary General Ambassador Manorma Soeknandan of Suriname will act in the post while the search is under way. This has happened before.

The aim, however, should be to start the selection process before the incumbent demits office. I am not clear on whether CARICOM, like other regional and international organisations, has established procedures for selection of a new secretary general. Article 24 of the Revised Treaty of Chaguaramas states that the secretary general shall be appointed by the Conference of Heads of Government, on the recommendation of the Community Council, for a term not exceeding five years.

Ambassador LaRocque took the helm of the CARICOM Secretariat at a very difficult time for the regional integration process. I would say that his nearly 10-year tenure was fraught with challenges – the failure to make significant progress in implementing the CARICOM Single Market and Economy, now in its 20th year; tensions between Jamaica and other member states over the movement of skilled nationals and immigration issues generally; difficulties in coordinating foreign policy issues; crises in Haiti; trade disputes; questions about the admission of new members; and dealing with external trade agreements and negotiations, among other things. The current heads’ communiqué shows CARICOM, in the COVID-19-exacerbated health and economic crisis, grappling with the consequences of missed opportunities.

In addition, Secretary General LaRoque, as chief executive officer, has had to deal with serious budget shortfalls as member states have been tardy in paying their contributions. There have also been continuing difficulties in adequately staffing the secretariat with needed technical experts and to pay internationally competitive salaries in what was considered a hardship post. This also affected the ability to acquire more modern equipment and services, to be represented overseas, and to travel to meetings.

The staff in the CARICOM Secretariat, who have persevered in the job and with their commitment to regionalism, must, indeed, be commended for their service. I am pleased that Prime Minister Rowley, in his remarks, commended the staff, too.

CARICOM, in my view, needs a secretary general, male or female, who is a genuine regionalist, is an experienced diplomat who understands the key policy issues, and is forward-looking. He or she should be a good manager who can inspire the confidence of not only the regional member states, but also the international community.

The post does not need an obsequious, self-serving character. It needs someone with integrity and fortitude who will speak truth to power, as necessary.

The selection process must be in keeping with international standards.

I would hope that it will be confirmed shortly whether CARICOM is indeed seeking a new secretary general.