Peter Espeut | Why is Jamaica last in line in vaccine diplomacy? 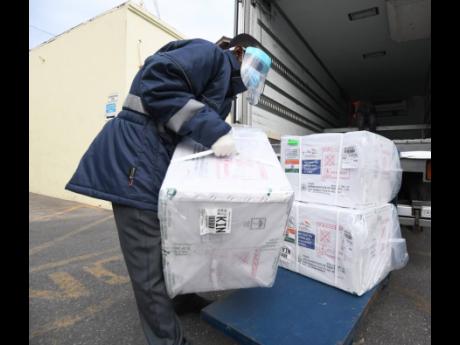 Ricardo Makyn/Chief Photo Editor
A staffer removes the five boxes of AstraZeneca vaccines, gifted to Jamaica by Government of India, at the National Health Fund’s warehouse on Marcus Garvey Drive, Kingston, on Monday.

I was born just before the serious polio epidemic of 1954; my mother, who was a nurse, made sure we all were vaccinated, and all her children survived that scare unscathed. Poliomyelitis, caused by the poliovirus, was not eliminated by the national vaccination campaigns, but the incidence was much reduced. There is hope that an effective vaccine against the coronavirus will eliminate the pandemic, and reduce COVID-19 cases to below crisis levels.

The Government of Jamaica has failed to implement strategies to control the spread of COVID-19 infections among a population undisciplined from top to bottom; last month (February) we broke the record for detected daily infections three times; the first week of this month saw three new records set on three consecutive days: 527, 723, and 878 new infections detected on March 5, 6, and 7, for a total of 2,128 new detected infections in 72 hours.

On December 2, 2020, the United Kingdom approved the Pfizer-BioNTech COVID-19 vaccine for emergency use, becoming the first country to approve a COVID-19 vaccine that had been tested in a large clinical trial. The first vials of anti-COVID-19 vaccines (9,750 doses) arrived in the Caribbean on January 5 this year, bound for the British colony of Cayman Islands (population 65,000). The Turks & Caicos Islands (population 38,000) – another British colony – got theirs on January 11, enough to vaccinate 5,000 persons.

British health authorities approved the Oxford-AstraZeneca COVID-19 vaccine on December 30, 2020, and they licensed the Serum Institute of India to manufacture it. On February 9, 2021, Barbados and Dominica received gifts of the Oxford-AstraZeneca COVID-19 vaccine from the government and people of India; Barbados (population 287,000) received 100,000 doses and Dominica (population 74,000) received 70,000 doses.

All these CARICOM countries received their first doses of the COVID-19 vaccine almost a full month before Jamaica. Is it that Jamaica has fallen so low on the totem pole of vaccine diplomacy that we are at the back of the line?

On the following day (March 8), Jamaica (population 2.8 million) received a gift of 50,000 doses of the AstraZeneca/Oxford COVID-19 vaccine donated by the Government of India.

Not only are we at the back of the line, but we have received less doses as a proportion of our total population. This is not a criticism of the generosity of the Government of India, but a comment on how low Jamaica has fallen in diplomatic terms.

And some months ago, the Government of St Vincent and the Grenadines approved the use of the Russian anti-COVID-19 vaccine (Sputnik V) for use in their small islands.

In the absence of transparency in these matters, I would like to know whether or not Jamaica declined earlier gifts of COVID-19 vaccines from India, Russia and China, and if so, why. There could be very good reasons, but we Jamaicans have a right to know.

Sadly, there is no vaccine against crime and murder, or against environmental destruction. To remedy these social diseases, we will just have to look to effective behaviour-change strategies among our politicians and the wider public.