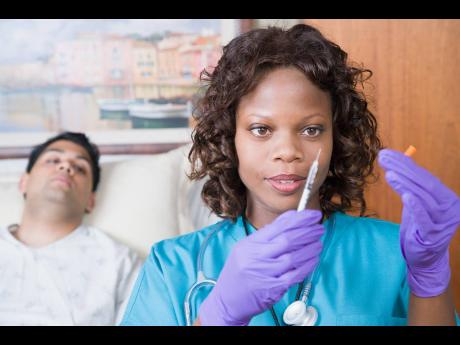 A nurse readies an injection to administer to a patient. Nurses from Jamaica are in high demand overseas. It is estimated that more than 70 nurses at the University Hospital of the West Indies have been lured by overseas recruiting agencies since January.

With tourism and mining limping, at least for the medium term, and Jamaican consumerism for foreign products going unchecked, any plausible recovery and reset of the Jamaican economy will require fresh initiatives about how we educate and train our greatest, God-given, now largely wasting source of capital – our human resources.

When President Barack Obama visited us in 2015, some members of the Jamaican Cabinet were introduced to him. His courtesy amazed me. He paid us the complement of knowing our names and portfolios, and wanted to engage us in meaningful talk even for a few minutes. “There is going to be a shortage of tens of thousands of nurses in the United States. Jamaican nurses are the best that I have ever had to attend me. They fit in much better than the Mexicans and Filipinos. Why don’t you train more nurses and send them to work with us? ” he asked the stammering minister of education.

Well, why not? Afterwards, Fenton Ferguson, then minister of health, and I met with the appropriate officials and try as we might, there was a problem for every solution aimed at radically expanding the nursing profession.

The cadre was too small to provide enough job opportunities. The pay was insufficient to attract the best applicants. Where would qualified tutors come from in sufficient number? Who will pay for the training and afford the technology others use to train more aspirants? And, most arresting of all, there are not (will never be?) enough hospital beds for practical experience. And, I almost forgot, what will happen to our earnings from sessions, if there is a much larger staff complement?

NO IMPETUS TO CHANGE

There was no impetus to change – to overcome institutional ennui and grasp opportunity. Just low-energy thinking on everybody’s part. Obama’s suggestion fell flat. And so did the possibilities of national advance and reset in an area of acknowledged Jamaican value and brilliance.

Meanwhile, the news is that scores of nurses have gone to foreign so far this year, even in this COVID-19 time when we need them most. And that is just a continuation of what has been happening for years. Why do we think that exhaustion and even tragedy are the pictures coming from our health personnel and many untreated sick people in and outside hospitals and clinics? It is because there are not enough trained staff available, despite the huge potential waiting outside the gates of the country’s nursing schools.

The principal of one such university-based training institution spoke to me recently. Their capacity is limited to 100 students while they have eight (yes, eight) times that number of qualified applicants each year.

Here’s hoping that out of the Budget exercise, and given the increasing miserableness and cramp of most people, there will emerge some high-energy thinking of how we can enthuse young and old with realistic prospects to gain useful skills, engender hope, justify effort, satisfy ambition, and advance the nation’s fortunes.

Gambling and boogie are distractions. Vocations in healthcare, science, enterprise; any aspect of teaching and learning; the creative arts and more – these deserve promotion and more investment. Minister Williams, coding is a great idea, but doesn’t it require that coders can read, write and compute properly first? When we do basic things right the first time, all other options can follow.

We should make the decision to train for foreign employment, as well as better local enablement – certainly for teachers and health personnel. Many of our best are going to migrate anyway. There are several precedents. The farm work programme has fuelled the rural economy for decades. The late Neville Gallimore used to tell me that a farm work card was the key to a family’s prosperity in St Ann.

The remittances which are keeping our economy afloat now come largely from professionals like nurses, teachers and home-care workers. The same money goes through official channels now that it can’t arrive in people’s pockets.

Cuba, admirably inventive while burdened by cruel American grudgefulness, has long learned to rent their intentional oversupply of nurses, doctors and teachers, not only to foster international comity, but to earn foreign exchange for their economy. Can’t we devise a way of doing a variant of the same?

Time for high-energy thinking – something far better than just scrambling to get back ‘Stella’s groove’ to the uncomfortable place we were a year ago.

Can you imagine the positive adrenalin that would flow in thousands more of our young people, now on the verge of fecklessness, if there was better prospect, offered them from early teenage, that education would lead to a real job with decent pay, here as well as abroad?

I believe many would go back to school, pull up their pants, stub out the spliff, ditch the bleaching cream and avoid the inanity of loveless sex, if guided to such real opportunity.

It can never be too late to rev up our diplomatic efforts in the overseas job marketplaces, expand the capital budget for education, use the field hospitals as training facilities, incentivise family savings, away from the liquor and betting shops, to match government investment in tertiary training; rescue the gasping universities thereby, and open up new reality – not obstacle-ridden promise – for so many more to ‘liv gud’.

This kind of holy boldness and creativity is the antidote to the insidious substratum of Budget propaganda which invites us to be resigned and accept the likkle ten thousand, the one-one patched road and give thanks, because it would be so much worse if ‘we’ were not in power.

On the streets, the mood is ‘no better no deh’. That is toxic for the inclusive, sustained, above-five per cent annual GDP growth we need to stave off the hunger and despair occasioned by the food price rises, which Julian Robinson so effectively highlighted last Thursday.

Less posturing by leaders, some real humility, a disposition to unite, and more faith in the yearning, latent capacities of all our people – high-energy thought and action – would be redemptive.