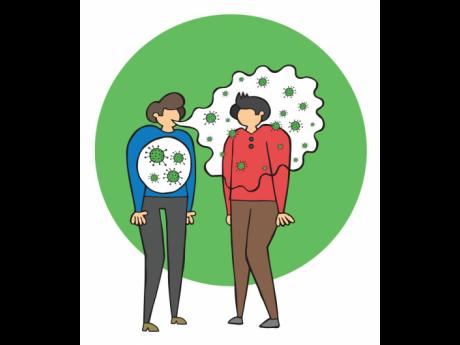 This is the tale of two ninnies who refused to take COVID-19 seriously. They were young and felt that that made them immune to the effects of the virus. They were fit, had no underlying health conditions, and spent a lot of time in the sunlight. They were of the opinion that, since Jamaica is a hot country with no winter season, the virus could not survive once exposed to the heat and sunlight.

These ninnies guffawed at any and everyone who tried to warn them about their lack of masks, closeness to friends and people on the street, and less-than-desirable hand sanitising. The ninnies never bothered to consider that, although they might become infected and experience absolutely no symptoms, the other people that they come into contact with might not be so lucky. After all, puss and dawg don’t have the same luck.

So, the ninnies went along their merry ways, scoffing at their detractors by pointing out that nobody around them was sick and therefore they were just fine. They worked closely with other ninnies without any precautions; they played dominoes and drank together with other ninnies who didn’t have enough sense to realise that no one can see the SARS-CoV-2 viruses as they exit mouths and nostrils and swirl around until they are swept away or dissipate or someone close by inhales them.

But it just so happened that one day, one of the ninnies sat thoughtfully at his gate. He watched as various people passed by – oldsters, babies, mothers, fathers,

schoolchildren and pretty women. All of them depended on him – on his adherence to the anti-COVID protocols – for their health and lives. He came to the realisation that, although he might be fine for now, since he didn’t wear a mask or wore it below his nostrils or on his chin, he may have been infected and could make someone else sick unknowingly.

It bothered him that he may not know who became sick because of his behaviour. He wondered who might have suffered and died horribly, all because he did not feel that he should wear a mask or keep distanced from others or perform proper hand hygiene. It weighed so heavily on his mind and soaked so deeply into his conscience that he immediately hopped off the wall and fetched a mask before returning to watch the troubled world go by.

He called up his good friend and tried in vain to convince him of the need to mask up, spread out and sanitise for their sake and for everyone else’s sake. But that ninny would have none of it…and so there remained only one ninny. The ninny gallivanted, went to parties, mingled with friends and relatives indoors, revelled until way past curfew times and generally lived as if COVID-19 never existed.

But, chicken merry, hawk deh near. One day, that ninny began feeling unwell; so did his little brother, big sister and elderly grandmother. He had chills and a fever, a sore throat, dry cough, headaches, body pains and weakness. His chest became so tight that he was struggling to breathe. Ninny had to go to the overcrowded hospital, filled with other ninnies and people other ninnies like him made sick. I’m sorry for ninny, well, sort of.