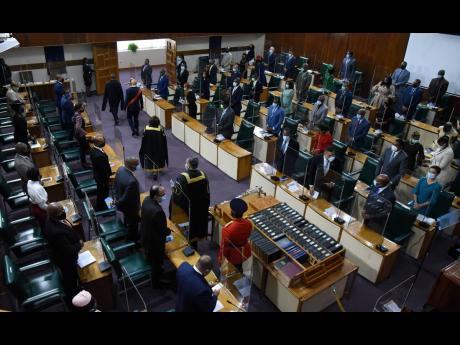 File
Members of parliament at the official opening of the Parliament.

Neither party, in government, has been able to (sustainably) reduce the number of murders, which seem to get more gruesome and horrific as the months go by; yet former ministers of national security – all failures in the eyes of the public – have been given high national honours, and are forever to be addressed as ‘Honourable’. The failure to prepare and implement an effective crime plan leaves the system of political garrisons, gangs and dons in place. So far, no party has been prepared to make any meaningful change.

Neither party in government has been able to (sustainably) pump up the economy to achieve more than two per cent annual growth in GDP (before COVID-19), when most of the rest of the world was doing much more than that. Any claim that “If it wasn’t for COVID-19, we would have done it” is belied by the famous failure to fulfil the ‘five in four’ promise – five per cent annual growth in four years; they struggled to get an accumulated five per cent growth over the four year period.

The private sector – which is supposed to be the engine of growth – is more interested in profits from paper investments than in production from manufacturing and processing, which would create both jobs and growth. Many are content to operate safely within the cocoon of waivers, tax breaks, and padded government contracts rather than invest in research and development of new products and processes. Former sugar lands in Clarendon and St Catherine are turning into bush and bramble (or being converted into housing), and grapefruits and rose apples are rotting on the ground.

Neither party has been able to craft an education system that delivers quality academic, technical or vocational education across the board; both parties have deepened the rural-urban and class divide. Both Barbados and Trinidad and Tobago – with a similar history to ours – have done better in this area since political independence than we have; we have the lowest youth literacy rate of the English-speaking islands, and the greatest gender disparity (favouring girls). The pandemic did not create the education divide; it only exposed its depth and width, created as much by the PNP and JLP as by the colonial plantation system that wanted strong unskilled black bodies in the canefields.

Violence by agents of the State against the public have continued across Administration of both parties. Our rate of police killings per capita is of world-beating proportions, and has been so for some time. And the justice system – which depends on the police to investigate crime – has been unable to get the evidence to convict very many policemen. Repression as a crime-fighting strategy has not worked, but neither party has any other ideas.

What has been sustained under both parties in government is political corruption; neither the PNP nor the JLP can claim any moral ground (high or low), as millions of dollars in public funds are wasted every year. Unqualified persons (political or personal friends) are hired and overpaid, and are given golden handshakes when the impropriety is discovered. Partisans get rich from jobs, contracts and waivers, which drives the whole corrupt system.

Neither party is prepared to legislate transparency in political contributions and the income and assets of political figures, which would make it easier to detect kickbacks, and make it harder for persons and firms to buy influence. The analysts tell us that the elimination of political corruption alone would free up the economy, and lead to an additional five or more percent of GDP growth.

Voting out the PNP government and bringing in this one has made no real difference; voting out the Andrew Holness administration will not bring meaningful change. We are at a democratic circular dead end, and the declining participation in elections tells us that most Jamaicans know it. Only those whose hearts are dead (die-hearted) or who “a look sup’m” support the two parties.

Unless a new and different political party emerges in the near future, our corner is dark indeed!