Mona Webber | Why we must remove plastic waste from our environment 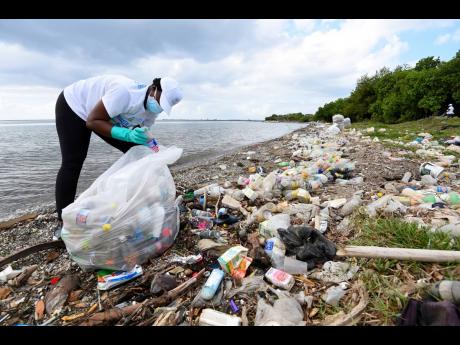 Ian Allen/Photographer
A volunteer from Recycling Partners of Jamaica picking up plastic bottles strewn along Sirganny Beach in East Kingston on Thursday, March 18. 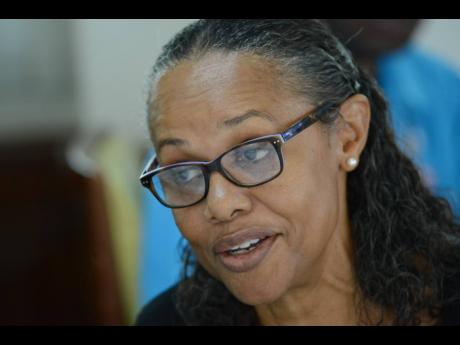 I wish to applaud the efforts of Recycling Partners of Jamaica, who, despite the logistical nightmare of organising a clean-up at the height of a pandemic, was able to do just that, and, in particular, target Refuge Cay, an island in the Port Royal mangroves that can only be reached by boat. The pictures accompanying Christopher Serju’s article in the Saturday Gleaner tell the tale.

It is no secret that despite some effort, plastics (especially plastic bottles) continue to rain down on the already-stressed ecosystems of Kingston Harbour, with the majority of the material ending up in the mangroves.

It was a mere three years ago (almost to the day) that Refuge Cay was completely cleaned of plastics during the first Refuge Cay clean-up called the ‘Refuge Cay Rescue’. It took 24 community members from Port Royal and other fishing beaches six weeks (ending March 9, 2018) to remove; 8,299 large garbage bags of plastic bags and bottles, 58 igloos or insulated water bottles, 101 plastic crates, 213 car and truck tyres, 35 refrigerators and washing machines, and other unmentionable garbage from this little mangrove island. Many believed it was a waste of money and time to clean Refuge Cay then, and they must be even more convinced of the futility of such clean-ups when they see what greeted the volunteers of Recycling Partners of Jamaica.

MUCH TO BE GAINED

I wish to indicate that there is much to be gained by removing plastics from our environment; and I am not about to launch into a discourse about the tremendous value of mangroves. Instead, I want to talk about plastics and why we must seek to rid our surroundings of this material.

Plastic is the name given to a range of materials, including styrofoam and nylon, that are synthetic polymers made from petroleum (oil, coal and natural gas). Synthetic plastics are extensively used because they are lightweight, strong, waterproof and last a very long time (over 450 years!!). Indeed, many believe the world as we know it would not exist if plastic was not invented. However, most plastics are made from petrochemicals and are almost always mixed with additives, including colourants, plasticisers, stabilisers, fillers, reinforcements and materials which, like Bisphenol-A (BPA), are known endocrine disruptors. Research has linked BPA to an increased risk of breast and prostate cancers, cardiovascular disease, and reproductive and brain development abnormalities.

Furthermore, when plastics remain in some areas they readily absorb other chemicals, like lead, cadmium, and mercury. Many of these are known carcinogens, endocrine disruptors, can lead to birth defects, immune system suppression, and developmental problems in children. Some cause metabolic disorders (including those leading to obesity) and reduced fertility. Even when plastics are burnt, they are a major threat as they release toxic chemicals like dioxins into the air. Any large build-up of discarded plastics is a toxic threat to plants, animals and humans. This is why we must make every effort to remove plastic waste from our environment.

When plastics remain in the environment, especially on beaches and shorelines, and are affected by sun, wind and waves, they become brittle and break up into fragments. Plastic fragments smaller than a millimetre are referred to as microplastics, and there is now evidence that microplastics exist in every type of environment (air, land and sea). Research conducted around the world reveal that tiny microplastics can become airborne (and can be taken in as we breathe), can get into groundwater from landfills, are in rivers and reservoirs, in soil and, of course, in the sea. In 2015, three per cent of plastics in the ocean (by weight) was estimated to be microplastics; in 2018, it was calculated that 50 per cent of plastics in the sea is microplastics! If those thousands of plastic bottles are left on Refuge Cay and on the Sirganny Beach, they will break up into very tiny fragments (of toxic material), which would then be impossible to remove.

In other parts of the world, microplastics have been identified in fish, sea cucumbers, oysters and a range of other sea creatures. This is why we must make every effort to remove plastic waste from our environment before it becomes microplastic.

Research at The University of the West Indies has shown that plastics in the mangroves is a significant threat to the growth and regrowth of the forest. Experiments in the nursery show that many mangrove seeds and seedlings covered by plastics are prevented from germinating, or do not grow. Plastic bags in a range of densities had the worst effect, followed by PET bottles at high density. So plastics in the mangroves will not only kill adult trees (as shown on Refuge Cay), but prevent natural recovery. This is why we must make every effort to remove plastic waste from our environment. If allowed to build up, it will smother and kill mangroves.

Finally, as plastics remain in the environment and slowly break down, they release gasses that affect our climate. Research has shown that methane and ethylene are produced as plastics degrade, and polyethylene (which is the main component of PET bottles) is the greatest emitter of these ‘climate-relevant’ gases. Large amounts of plastics in the environment help to worsen climate change.

So as frustrating as it is, the continuous, repeated removal of plastics during environmental clean-ups is not a waste of time. The activity also galvanises and strengthens our resolve to fix the problem at source (turn off the plastic tap); to stop the excessive production and use of single-use plastics and to stop the illegal dumping of garbage so plastics do not end up in our environment and in our mangroves.

Mona Webber is a professor of marine biology and director, Centre for Marine Sciences and Discovery Bay Marine Laboratory, The University of the West Indies. Send feedback to mona.webber@uwimona.edu.jm.