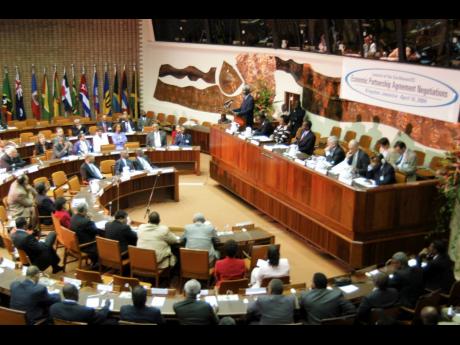 File
This 2004 photo shows the CARIFORUM-EU Economic Partnership Agreement (EPA) negotiations launched in Kingston, Jamaica. On Thursday, March 18, the 10th UK-Caribbean Forum was held. It was attended by ministers from the Caribbean ACP Forum, including Dominican Republic, Cuba and the British overseas territories.

On Thursday, March 18, the long-overdue 10th UK-Caribbean Forum was held virtually over several hours, formally hosted by the United Kingdom (UK). The meeting was attended by ministers from the Caribbean ACP Forum (CARIFORUM), which meant that for the UK, the member states included the Dominican Republic and Cuba. The British overseas territories were also present. The meeting was co-chaired by Lord Tariq Ahmad of Wimbledon, minister of state responsible for South Asia and the Commonwealth, along with Foreign Minister Eamon Courtenay of Belize.

The ninth forum, held in The Bahamas, on April 29-20, 2016, was attended by the then foreign secretary, Philip Hammond. This meeting, with alternating host, should be held biennially and aims to strengthen UK-Caribbean cooperation now in the post-Brexit period.

Two days prior, on March 16, it was reported that Prime Minister Boris Johnson presented to the House of Commons his government’s new policy paper outlining their vision for Britain, post-Brexit, up to 2030. This British ‘vision 2030’ is titled ‘Global Britain in a Competitive Age’. It is not clear to me whether Caribbean high commissioners and ambassadors in London had an advanced copy of this new policy document to inform the region’s preparations for the UK-Caribbean Forum. It does appear that some media houses had access to a leaked copy.

I cannot help thinking that when the British met with the Africans, it was an investment summit in January 2020.

This UK-Caribbean Forum was addressed by the foreign secretary, Dominic Raab, who in his statement told the meeting, “The link between the UK and the Caribbean could hardly be stronger. With over one million people of Caribbean origin in the UK and over 200, 000 British nationals in the Caribbean, we are more than friends. We are family.” He cited this as the reason why the British government was moving to right the mistakes which led to the Windrush scandal.

Secretary Raab pointed to three areas of his government’s interest, which would become the focus of the meeting. These were:

1. Beating COVID-19 – The UK is one of the biggest contributors to the WHO’s COVAX Facility;

2. Alleviating COVID-19’s impact on the tourism-dependent Caribbean countries – The UK will continue to play a key role in the region, including through its £21-million contribution to the Caribbean Development Bank’s Special Development Fund; through building climate and disaster resilience; recognising the special case of small island developing states in sustainable development; and promoting open and equal trade through the UK-CARIFORUM Economic Partnership Agreement.

3. Mitigating climate change – Pursuing green economic recovery. Giving the Caribbean a strong platform to raise its concerns at the UN Climate Change Conference to be held in Scotland.

He also spoke to the important role which the Commonwealth can play and informed the ministers that the UK is committed to being a force for good in the region.

The forum’s communiqué and action plan are available on the CARICOM website in ‘CARICOM Today’.

Preparation of this policy document was apparently announced in 2019, but its completion was delayed by COVID-19. The 114-page document is available on the UK government website. It came to my attention a few days ago. In summary, the UK is taking an integrated approach to security, defence, development and foreign policy. The government plans, among other things, to:

• Become a leader in science and technology, investing in research and development, and attracting expertise through its Global Talent Visa;

• Return development assistance, over time, to 0.7 per cent of GDP, having recently reduced it to 0.5 per cent;

• Be a European country with global interests; and

Looking specifically at foreign relations, the UK’s priority interest is in tilting to the East – to the Indo-Pacific region and China. The Indo-Pacific includes the India subcontinent, the members of the Association of South East Asian Nations, Japan, Australia, New Zealand, USA and Canada. In reference to the Commonwealth, the document points specifically to Australia, Canada and New Zealand, and in Latin American and the Caribbean, to the larger countries such as Mexico, Brazil and Argentina. Of course, there remains specific interest in the USA, EU and Africa.

The UK is about increasing trade and investments, finding markets outside the EU, and thus the focus is on the larger countries and more lucrative trade agreements.

Referring to the policy document, one foreign journalist spoke of Britain seeking to forge a new path as Global Britain while toting its colonial baggage; the legacy of its past stint as ‘Global Britain’, when Britannia ruled. Last week, I read with interest Ambassador David Comissiong’s article titled ‘CARICOM refines reparations campaign’ in The Gleaner of Sunday, March 14, as well as this section in the communiqué of the 32nd CARICOM Interessional Meeting. Of course, this ‘colonial baggage’ was not on the agenda of the UK-Caribbean Forum and would not appear in the UK’s new policy document.

Though now a multi-ethnic party in membership, reflected in the Cabinet, I do not see evidence that the UK Conservative Party gives public expression to these colonial issues which consume many in the Caribbean.

I am of the view that Caribbean proponents need to examine the documents from the UK-Caribbean Forum, the UK’s Global Britain policy document, and to review more closely the trade and aid relationship over the last 45 years to be au fait with the development-support issues.

Post COVID, the next UK-Caribbean Forum should be in-person in 2023, hosted by the Caribbean. The Conservative government could still be in office. It certainly would be interesting to see how this UK-Caribbean Forum would be structured and the progress the UK would have made in becoming, again, Global Britain.