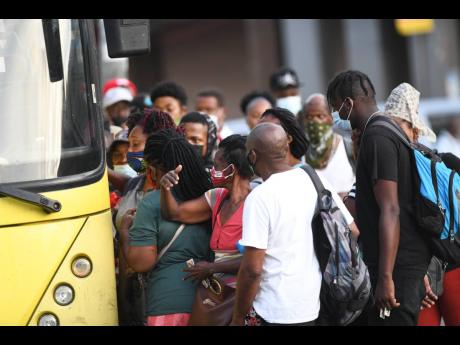 It is quite difficult to achieve the delicate and fragile balance between lives and livelihoods; you can reach it this month, and then something shifts and you lose it next month. You are better off planning not to stay poised on the knife edge, but to stand firmly on one side or the other – favouring lives or livelihoods, depending on where your priorities are – so that when there is some shock, the equilibrium is not thrown to the other extreme.

It seems to me that – at first – the Jamaican Government favoured the ‘lives’ side of the equation; the airports were closed to keep the virus out, and to keep the number of cases (and deaths) low. And we did pretty well, and were commended for it.

And then business interests induced the Government to open up the country, and to tip the scale in favour of the ‘livelihoods’ side; their livelihoods were more important than other people’s lives. COVID-19 cases and related deaths began to increase.

And with the Opposition in disarray, the Government decided to call a general election, without seriously controlling the usual mass campaigning with motorcades and street meetings. “We put politics first” could have been the campaign slogan. The election campaign pushed us into community spread, and led to coronavirus infections spiralling out of control.

Yes, we Jamaicans are undisciplined from top to bottom. There is enough blame to go around.

Jamaica’s Disaster Risk Management Act (DRMA) was passed in 2015 to govern the response to hurricanes and earthquakes; it had rubber teeth; if persons disobeyed the orders under the DRMA, they had to be warned before they could be arrested; and penalties were small.

It reminds me of when I was a teacher in a boys’ high school. Caps were not part of the school uniform, and were not allowed. When I saw a boy wearing a cap, I would take it away. “Not fair, sir!” they would exclaim. “You are supposed to give me a warning”. They felt they had nothing to lose wearing a cap; if a teacher saw them, they would take it off, and then put it on again when the teacher went around the corner. Few would try to wear a cap with me around.

With the DRMA operating for 12 full months with rubber teeth, the Government encouraged the hustling public to ‘try a t’ing’. Why not? The worst that could happen is you would be warned to go home. Government policy and practice allowed hundreds of dances and sessions to take place every week, super-spreading the COVID-19 virus to record levels.

Catchy jingles encouraging people to social distance, wear masks, and sanitise their hands are widely ignored (as are the commercial spots encouraging gunmen to turn in their guns). These PR campaigns cost millions of dollars. What does this say about how the Government views the average man/woman in the street? They take us for simpletons!

Smart, effective governance would have led to the amendment of the DRMA by at least June 2020, promoting zero tolerance for breaches. It is likely to be amended by April 2021, after the healthcare system is past breaking point.

In the meantime, having decided that the strategy of favouring ‘livelihoods’ has failed – with hospitals jammed and oxygen in short supply – the Government has (belatedly) issued new, stiffer regulations for the holiday season. The pendulum has swung back to favouring the ‘lives’ side of the equation. Had this been the consistent approach from the beginning, it is likely we would not now be in a healthcare crisis, and approaching 600 COVID-19-related deaths.

The congregations I administer will suffer during this holiest of seasons. Because our worship is by both word and sacrament, listening online is a poor substitute for being really present: no His flesh and drinking His blood, no Palm Sunday procession, no washing of feet on Holy Thursday, and no baptisms on Holy Saturday night.

But then there is the Resurrection. And there will be life after COVID-19!