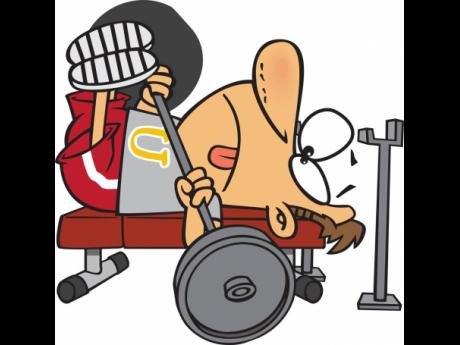 The first time I heard the term ‘dynamic tension’ was when I saw my cousin Vernon grimacing, making noises like a mad bull with eyes bulging, waging a war, seemingly to the death, between his right and left hands. Since neither budged and his veins, even on his forehead, seemed to be swollen, I advised him, “Maybe you should try some Andrew’s Liver Salt or Eno’s if you have a problem.” He yelled, “Stop bothering me and telling me stupidness. You can’t see I exercising!” At the ripe old age of seven, growing up in an environment in which my father pronounced ‘shovel’ as ‘shobbel’, and my aunt spoke about “lighting the lomp” or “buying some funnychairs”, I knew cricket and football, but I thought ‘exercise’ was what we called a ‘copy’ book. I asked him, “So where your copy book and lead pencil?” He released his hands from each other, glad to separate both combatants, and then sought to explain the ways of the words to me. “I don’t need no copy book,” he boasted. “I have Charles Atlas.”

My cousin Charles had got fed up of school and decided to run down girls and occasionally help in his father’s shop, so I replied, “You lucky Charles give you his atlas. Now that I going to Standard One and we have to learn geography, you think I could borrow it?” He laughed at my stupidity and then corrected me, “Is not Charles’ atlas. It is not even an atlas for geography. It is a book by Mr Charles Atlas and he is a bodybuilder, and he tell us in the book what to do to put on muscles and get strong so girls will come running you down. The book is about ‘dynamic tension’.”

INTRODUCTION TO WEIGHTS AND MEASURES

This was my introduction to weights and measures according to Atlas. I knew ‘waits’ – the long delays waiting for the bus, waiting for my father to come home so he could continue and complete the punishment that my teachers, neighbours and my mother had started when I ‘hopped’ off the train and landed in the fence, or when I hit Rachel Coombs with a block of ice behind her head and I did not wait for her to retaliate. I knew about weights when we went in the shop and our goods were put on the ‘scale’, but my mother insisted that we got “short-weight”. The first time she complained about the short-weight, I had said, “But Mom, they keep us waiting a whole half an hour and my friends were waiting to play cricket.” “It good for them,” she replied, “and for you, too. Next time I will make sure you do your home lesson before you leave the house.”

Measures were easy. My mother was a ‘seamstress’, with the accent on ‘stress’, especially when my father spent his entire pay on a drinking spree with his friends, which generally went on unabated for several days. Mom had a tape measure that, with her scissors and old Singer sewing machine, were the tools, but hers were the skills and determination that kept us from starving. At several different times in my life, my alcoholic father invested in ‘shops’ selling rum and dry goods. Generally, he consumed the rum and the business before we could really make much of a dent on the dry goods. I was around 11 when I first discovered the weights and measures that were to be part of my life for a very long time (and still are).

Charles Atlas, who boasted that dynamic tension was all anyone needed to grow muscles strong enough to beat the biggest bully, was caught, not with the young ladies attracted to his muscular torso, but with weights that he was lifting to grow and improve his muscularity. We realised that we had to be dumbbells to fall for his gimmicks and so we shifted to weights, which, because of the high cost of equipment, protein supplements and pictorial magazines, left us broke. In other words, in the jargon of weightlifting we not only got ‘cleaned’, but also ‘jerked’. My friends and I converted milk cans, and bits from rotting cars, including damaged rims, for our gym in our garage. We all wanted to become as muscular as the movie star Steve Reeves and some of our Caribbean strongmen, including Rick Wayne of St Lucia; Michael Hercules and Christopher Forde from Trinidad and Tobago; Roy Callendar, the ‘Barbados Bomber’; and Jamaican legend Lloyd Young Snr.

I borrowed the weights from the scales in my father’s shop and begged one of the drinkers, who worked in the oil company, to fabricate two iron plates that we could use for squats. When I heard the prime minister was evicting squatters, I went to my Aunt Shirley, the hairdresser, and switched to curls. My neighbour, Mr Glasgow, shouted out whenever he passed and saw us, “I thought you were bright, but all you doing is giving iron ride. You letting iron ride you!” It was a neighbourhood joke. Together with, “When you get big stones (hydrocele, or what Guyanese call ‘godee’) you go have to put them in a wheelbarrow and push them with you.” Fortunately, before the wheelbarrow was required, the parents of one of the boys bought him a set of weights and every day, after football or cricket practice, we gathered in his garage to lift iron. This is where the measures came in.

My mother kept wondering why she could not find her tape when she had to measure someone for a dress. She usually found it on the dressing table or any other part of the house with a mirror. Body-building is linked to measuring how much your body has grown, and so we learnt the jargon and measured (and posed) to our delight, showing off the biceps, triceps, ‘lats’, thighs, and chests. One of the boys also came up with the measurement of another important body part and advised us that if we used a cassava plant as our tape, making sure we did not cheat on the measurement, and then buried it in the ground near the standpipe, our growth and the cassava tree that was emerging would be of identical size, stature and length. What it proved was that Charles Atlas was not the only one in the business who sold false hopes and dreams.

While the cassava proved to be of no use, even with salt fish, I continued to give the iron ride upon ride and while not consistent, my love of weights and measures persists up to today. There is a saying I’ve heard in a few Caribbean countries about giving Jack his jacket. Well, today I gave gym his gym boots and spent a happy hour, first on a treadmill doing a mile and then bench-pressing to my heart’s content and my doctor’s satisfaction. And if anyone asks me how to get to the gym I use, I will say, “Forget Charles Atlas and use WAZE.”

Tony Deyal was last seen quoting musician and weightlifter Henry Rollins who said, “I have found the Iron to be my greatest friend. It never freaks out on me, never runs. Friends may come and go. But 200 pounds is always 200 pounds.” Send feedback to columns@gleanerjm.com.