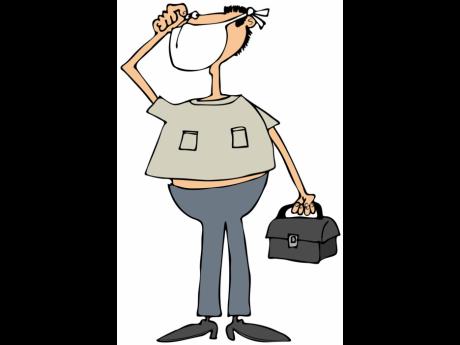 In Trinidad last week, a government minister took off his mask and had an ‘airgasm’. Attorney General Faris Al-Rawi claimed he decided to “step away from the suit and tie, sat back and supported charitable games with some very special people…” Two of those “special” people, a police superintendent and a radio host, were also barefaced enough not to wear masks.

While the prime minister of Trinidad and Tobago declared he was “disappointed” and for political reasons may have masked his anger somewhat, people throughout the region are being fined, and some have been jailed, for not wearing masks in places where, according to the law, they should. In Trinidad, a policeman was charged and fined for not wearing a mask.

In Jamaica, despite an “expletive-laden” rant by reggae star Buju Banton, who claims that the virus was fake and masks will not prevent people from contracting COVID-19, the Government ordered the wearing of masks since March 19, 2020. Buju’s critics pointed out that it is a complete turnaround for the singer because he sold a branded face mask to promote the launch of his Upside Down 2020 album in June. The cloth masks, with a copy of the album, sold for US$23.

In the meantime, earlier this week, Jamaica had about 38,514 cases of COVID-19 and 586 deaths. Barbados, where mask-wearing became mandatory on February 6, has so far experienced 3,634 cases and 41 deaths. In Trinidad and Tobago, there are some 8,000 cases, 7,603 recovered (meaning almost 400 had not so far recovered) and at least 142 deaths. In all three countries people who broke the law were fined and a few were imprisoned.

While those figures might need further explanation, the one that demands action is the unmasking of the two-faced attorney general who is responsible for the new laws which impose heavy fines and other penalties on those who are not wearing masks. As one of my angry Trini friends explained, “There is ‘fine’ and ‘fine’, one for us and one for the Government. They drop a ‘fine’ of 1,000 dollars and more on us if we don’t wear a mask. But it is ‘fine’ for Al-Rawi who made the law not to wear one and get away with it. I ‘fine’ that is unfair.” Another, from a punster friend, was, “Tony, maybe hanging out with a big policeman and a DJ who were not wearing masks made him feel that wearing a mask was against his ‘mask-ulinity’ and he wanted to show that whatever they could do, he could do better.” One of my readers, who lived in England for a long time, advised, “You know, even if he forgot his mask, he could have asked one of the ladies there to lend him her bra and wear the left cup. As it is, with or without the bra he still ended up looking like a right tit.”

The one that was like a ‘mask-ectomy’ came as a WhatsApp call from a Trini friend now based in Egypt. “Tony,” he announced, and I immediately discerned the wickedness in his voice and knew he was up to absolutely no good. He asked, “What is the difference between damask and jacquard?” Since I was using my phone, I had no time for a quick google so I hedged. “I know that they are fabrics or some kind of cloth and damask is reddish. They are from the Middle East, places like Syria and Iraq.” He laughed, “You have it wrong boy!” and added, “If you make the law that we must wear masks and you break the law yourself, you’re not just a damask but you are a total jacquard.” I answered in fake-Jamaican, especially because he was talking about fabrics, “Blood-cloth. You leave me in stitches with this one.” I also questioned my pal if he was sure that the second letter in ‘Damask’ was an ‘a’ and not a ‘u’.

Despite the humour, I started to think about the sad state of politics where only poor and politically unconnected people are found guilty, fined or punished for breaking the law, and the ministers, strong supporters and financiers can do whatever they like without having to face the legal consequences. According to Professor Tony Wright, “People perceive politicians to be playing a game in pursuit of political advantage rather than work earnestly to solve the issue of the day. The corrosive consequence of the game of politics is that everything that a politician says, or does, is treated with suspicion because of negative assumptions about why it is being said or done.”

Trinidad and Tobago is one of just four Republics in the Commonwealth, and the only one located in Latin America and the Caribbean, an area famous for its ‘banana’ republics. According to Wikipedia, “In political science, the term ‘banana republic’ describes a politically unstable country with an economy dependent upon the exportation of a limited-resource product…” Some people might claim that the country is not unstable but more like a twist in the George Benson song, Lost In The Maskerade. Even so, the question is not whether it is a banana republic but what variety of banana best describes it? In the Caribbean we have many different types and sizes. In Jamaica, Barbados and Trinidad, we have the biggies – Robusta, Lacatan, Gros Michel and even one called ‘Williams’ – the surname of the latter’s first prime minister, Dr Eric Williams, who led the country’s independence movement and ensured that it became a Republic. The smallest ones are called ‘figs’ or ‘banana figs’ in Barbados, and ‘Silk’, ‘Chinese Apple’ or ‘Thousand Fingers’ in Jamaica. In Trinidad, once a colony of Spain and just a few miles away from the South American continent, most people use the Spanish name for the smallest banana of all and the one that best describes where the country is at the moment – ‘Chiquito’, meaning small or tiny in physical size but, from the evidence, increasing in what I consider ‘small mindedness’.

Every political happening in the Caribbean is at most a nine-day wonder. By stonewalling and closing ranks, the present Government will not have to give in to the calls for the attorney general to resign because of his blatant ‘Do as I say but not as I do’ behaviour. However, as his defence, I can see the attorney general, backed up by his police and DJ chorus, singing the Buju Banton song against wearing masks and bitterly condemning those who want him to go. “They taught you to love Michael Jackson and then they taught you to hate Michael Jackson. They taught you to love Bill Cosby ... . Don’t you see they have been lying to us for all this time? So why should we believe them now?” Perhaps, like Buju, he will sell the recording with a branded face mask attached.

- Tony Deyal was last seen telling a lawyer joke that reminds him of a few in political office right now. What do lawyers do after they die? They lie still. Send feedback to columns@gleanerjm.com