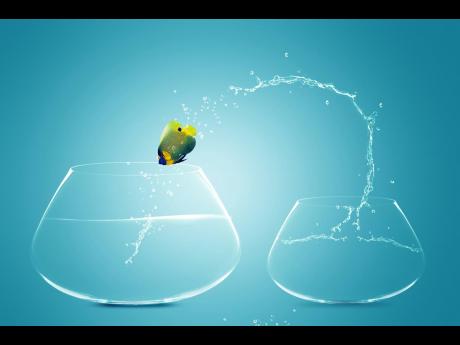 ClipArt
A graphic representation of an Angelfish jumping to big bowl, symbolic of taking a leap of faith, of opportunities, and overcoming challenges among other things

It’s Easter time, spring time, time for regeneration. Pandemic and economic crisis time, too. And a subliminal psychosocial volcano which spews out violence, malevolence, and desperation every day - as if just to warn us of the greater danger below the surface, downtown and uptown.

The trouble is that the tissue of values fundamental to any but the slowest and most deformed reset of individual and institutional behaviour has broken down. The principle of the common good as the compass for all national policy, budget expenditure, and personal aspiration is not universally accepted - no longer intentionally taught or even deeply examined. Autocrats and special interests; money or guns, depending on your class, prevail.

What are the morals that bind us as a society? For many, even posing such a question seems irrelevant. Here is a quote from someone who, I am told, is a very influential dancehall personality – no doubt mentoring multitudes of Jamaican youth.

“Whatever I want to do, I do it. People should be free in their own life. I’m not standing for the things ‘they’ stood for. If I want to do it, I’m going to do it. This generation is like that.”

Andrew says he is a fan of dancehall but not the violent lyrics. What about the gyallis culture, PM? Babsy is a committed impresario. Of the whole show? I think Mark is partial to the genre, too. But do any or all of them think that we can reset the tortured social relations, the broken political economy on the selfish principle of life and conduct? Is that what freedom from mental slavery boils down to?

THE STREETS, BUSINESS ETHICS AND RELIGION

Maybe not a representative view, you say? But not far from what one hears on the street, on social media, in the weakness of business ethics and even in the me-and-God-alone religion of some churches.

These two viewpoints are dialectical and antagonistic positions. “Hey, Missa Holiness, mi hear what yu seh bout how it gwine develitup in five in four, an how yu gwine lick back COVID and crime, but jus gimmi what yu have fi gimmi now.” Distrust of authority is the ugly daughter of classism, tribalism, and rabid individualism.

Demas’ value construct is founded on the presumption of a common good, a deposit of broadly accepted “truth”; a commitment to shared sacrifice, combined effort, and a less mimic, more equal, if modest, prosperity.

And it is because there is no credible vision of a Jamaica where all can prosper – not in terms of the rusting criss cyar or the chi-chi-infested, unhappy mansion on the hill, but the energy of a shared national cause - that so many people, young and old, lapse into hedonism, exaggerated individualism, sexual or consumer titivation, can’t bother to vote or just want to escape, anyway to anywhere, until they get there.

The minister of culture is right to ‘bawl out’ to the churches to help avert the scourge of violence against women. But isn’t it so that inter-personal violence is the most profound act of self-disrespect? It excuses nothing to assert that boys often grow in circumstances of cruelty and neglect, with such low regard for themselves and tutored disrespect for the beauty and sanctity of women that “whatever I want to do, I do it”.

WHERE DID WE HEAR THAT BEFORE?

I do hope that the churches will help. They are so divided that it is unlikely. What is for sure is that the neo-colonial political culture ought to, but cannot, provide the leadership. As Demas says, the change has to come from the bottom. In Thompson’s difficult but authentic thesis, that it is through grass-roots activism grounded in Judeo-Christian principles of the common good, there resides our best hope.

Although it will take much more, why not begin with our schools? I follow Keith Wellington of STETS, conversing with me last week, insisting that the reopened schools should concentrate almost entirely on repairing, restoring, and resetting the moral, social, and civic compass of almost three-quarters of a million children and young people.

Do this at least, practical and possible, and most other good things will follow.

Rev Ronald G.Thwaites is an attorney-at-law. Send feedback to columns@gleanerjm.com.