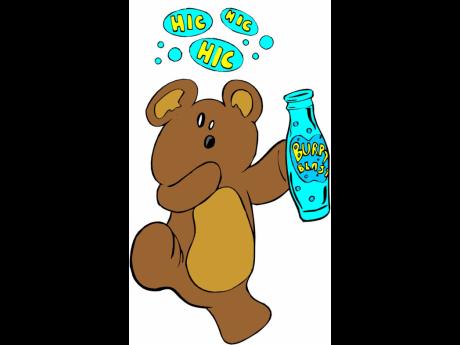 A man ran into a bar in the Wild West town of Tombstone and asked the surly bartender for a glass of water. Instead of pouring the water, the bartender grabbed a shotgun that was hanging on the wall behind him, pointed it at the man, and cocked the weapon while shouting, “Another one for Boot Hill.” The man jumped almost to the ceiling, thanked the bartender, then walked out of the bar, laughing happily. Why did the bartender behave as ‘dread’ as he did and why, despite the evidence, the man thanked the bartender? This is a lateral-thinking puzzle designed for people who can walk and chew gum at the same time.

The best answer is that the man had hiccups and knowing that hastily drinking a glass of water might cure it, asked for the water. The bartender, realising that a good scare or fright was known to be more effective, used his gun to help rather than hurt the man. The man, happy that his hiccups had been cured, thanked the bartender and walked out in high spirits without even touching a drop of the stuff.

Today is Tuesday, April 6, 2021, and I suffered six consecutive days of almost continuous hiccupping, and when I thought the cause of it would rest on the seventh, that did not happen and I am now in the eighth, and still counting. My personal record was in October 2018, when I suffered more than 18 days of almost continuous hiccupping. For someone like me, so old that I distinctly remember when a hiccup was a ‘hiccough’ (said to be the incorrect assumption that it originates from the word ‘cough’), it is tough on me and my family.

The only thing my wife Indranie has not yet tried is pulling a gun on me. Given my last episode when after six doctors, various blood tests, ECG and CT scans the problem persists like flooding in Trinidad, she will either reach for an AK-47 or continue to hope that this episode will not last as long. I have the occasional respite, which allows me to grab some short-lived sleep; but right now the hiccups are back and going guns without roses.

The worst day so far was today, Tuesday. I had gone to the local health centre in Chaguanas, Trinidad, where the doctor was very knowledgeable, and he sent me to get X-rays and scans as well as a blood test, which he said were all available in the centre. Because it was Easter Monday, the people in charge of those services were not available and I was told to return the following day. So, I went and was then informed that I would be unable to get the scans and X-rays until mid-May and the blood tests until mid-November. I figure, despite the high cost, I will have to get it done privately if I wanted to survive, but what about the many people I saw there who definitely could not afford it? This experience of despair – dancing with hobnailed safety boots over the head of hope and the poor – reminded me of the previous time, three years ago, when we were in Barbados for the graduation of my younger son, Zubin.

I had made it clear that so long as there was even a vestige of life in these limbs, I would find my way there despite the heavy rains and floods that October in Trinidad. Even if I had to row to Barbados, I would do it. Unfortunately, the hiccups got worse. I went on the web-messaging service of Professor Henry Fraser, former senator and one of the nicest and brightest people you would ever meet in several lifetimes. I was surprised that he did not respond immediately, so I then tried Dr Wayne Welsh, who had successfully managed the birth of my two Bajan children. I knew that even though the best gynaecologist in Barbados could not deliver me from the hiccups, he would have at least one colleague who could. It did not work out, given that it was weekend. We left Barbados on the Sunday night, and, fortunately, I did not shake the plane every time my body heaved with the hiccups, which were now dealing out its staccato soca rhythms in bursts of sixes and sevens. Then, early that Monday morning, I got a call from a bemused Professor Fraser, who observed that his phone number is listed in the Barbados Telephone Directory and that given the circumstances, I should have called him. Of course, I blamed the hiccups for my not thinking of the obvious.

He told me one other thing. A joke about hiccups. A man entered a drug store and asked to see the pharmacist. When the pharmacist came out, the man asked if he could give him a cure for the hiccups. The pharmacist immediately reached out and slapped him across the face. “What’d you do that for?” the man asked. “Well, you don’t have the hiccups anymore, do you?” “No” the man replied, “but I’d bet that my wife out in the car still does!” Then there is the case of the man who walked into a doctor’s office as this nun ran out crying. Puzzled, he questioned the doctor, “Doc, what did you do to that to that poor nun that made her so upset that she ran out of your office in tears?” The doctor answered, “I told her that she’s pregnant.” The man replied in total astonishment, “The nun is pregnant? How? I mean, she looked like she’s in her 60s and besides…” The doctor shrugged, “Well, at least it cured her hiccups.”

None of my doctors had the nerve to break that kind of news to me, but one of my friends did. He told me, jokingly I hope, “One thing about your looks, they’re a good cure for hiccups. Have you tried looking into a mirror?” If I were a bartender, I would have pulled a gun on my acquaintance, and not as a hiccup remedy either. However, I can still laugh at my own predicament.

For instance, “What’s grey and wrinkly and jumps every 20 seconds?” Not me. The real answer is an elephant with hiccups. Perhaps I will try it on my latest doctor as a Christmas gift, or whenever I get the scans and blood tests. My experience with the scan reminded me of the joke about the man who took his very ill duck to the vet. First, the doctor brought in a dog and it gravely licked the duck, then he brought in a cat which sniffed the duck, and then the duck died. The heartless doctor told the man that the cost of the visit was $3,000. When the outraged man demanded an explanation from the doctor for the extremely high cost, especially since the doctor had done nothing at all, the response was, “It’s $1,500 for the lab test, and $1,500 for the CAT scan.”

Tony Deyal was last seen asking Professor Fraser, “What is green and can jump a mile in a minute?” A grasshopper with hiccups! Send feedback to columns@gleanerjm.com.