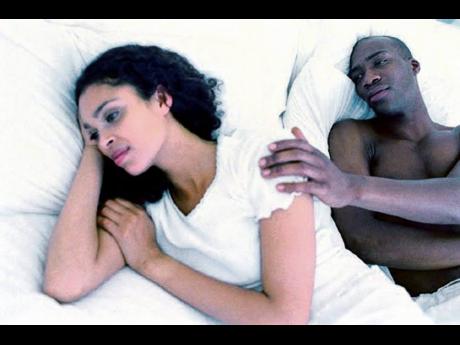 File
A graphical representation of an abused woman with her partner. Intimate-partner violence and violence due to sexual competition (either predatory females or males can be the main aggressors) are hardly surprising when sexual relations are transactional.

Jamaica is a violent society. Parents inflict violence on their children in the name of discipline, and order is enforced in political garrisons by the barrel – of a gun, or the fear of being stuffed in a barrel.

Relations between the genders are not that great either. The words and expressions commonly used in Jamaica to describe the act of love are quite violent. Sexual relations are often transactional and exploitative: whether we are talking about legal marriage or common-law unions, typically males are after pleasure and status, and females are after money and security. Males often come to feel that they own what they pay for, and females often increase their demands (price), and move to the highest bidder. Violence can result when the female demands freedom and moves on, or another woman enters the picture, competing for scarce resources.

[Why are there 14 high schools for girls in Jamaica, and only seven for boys? Why are the girls’ high schools – on average – so much larger than boys’ high schools? Why do co-ed traditional high schools have so many more girls than boys? Why do we require boys and girls to sit the Grade Six Achievement Test/Primary Exit Profile examination at age 11 when girls are so much more conceptually developed than boys? Are we happy that Jamaica’s education system disadvantages boys?]

Intimate-partner violence and violence due to sexual competition (either predatory females or males can be the main aggressors) are hardly surprising when sexual relations are transactional.

To me, the fundamental problem here is transactional intimacy, and those who wish to reduce intimate-partner violence are best advised to plan to socialise young and old to seek meaningful interpersonal relationships rather than predatory and exploitative ones. This would address the problem at the root; but as usual we take a superficial approach, which will solve nothing.

And so do women’s activists. They have lobbied the United Nations to create the ‘International Day for the Elimination of Violence against Women and Girls’. Should they be successful, all that will be left is ‘Violence against Men and Boys’; will this make the ‘gender activists’ happy?

I thought men and women were supposed to be equal. Why are we more concerned about violence against women than violence against men? Why female exceptionalism? Is it because women are more important than men? If so, then we should stop preaching equality of the sexes.

We all should be against all violence. Period!

Of the 1,323 persons killed in 2020, 113 or nine per cent were females. If no females were killed – only males – Jamaica would still have one of the highest murder rates in the world.

According to police statistics, the percentage of women murdered in Jamaica has been stable at about 10 per cent over the last decade. Globally, the average is about 19 per cent. Jamaica, then, is safer for women than most other places in the world.

Gang-related activities (usually among men and boys with toxic personalities) account for 80 per cent of murders across the island.

Neither of our major political parties has been able to reduce the homicide rate, possibly because they both are too involved in garrisons and gangs. Possibly if we tackled gender toxicity – even among politicians – we might see some small improvement in our murder statistics.