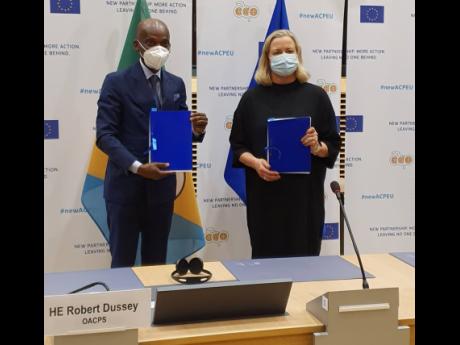 Contributed
Lead negotiators, the OACPS’s Minister Robert Dussey of Togo and EU Commissioner Jutta Urpilainen, initialled the text of the agreement to signal that the negotiations were fully and formally concluded at a ceremony in Brussels on April 15.

In my article of December 9, 2020, I addressed the conclusion of the Organization of African, Caribbean and Pacific States (OACPS) and the European Union (EU) post-Cotonou negotiations when the negotiators resolved the remaining outstanding issues. The Cotonou Partnership Agreement was scheduled to expire in 2020 and thus negotiations commenced in September 2018 in New York, on the margins of the UN General Assembly, for a replacement agreement. These negotiations covered about two and a half years.

Following a period of legal review, these negotiations were formally concluded on April 15 at an initialling ceremony in Brussels. Note that initialling is not signing. The lead negotiators, the OACPS’s Minister Robert Dussey of Togo and EU Commissioner Jutta Urpilainen, initialled the text of the new agreement to signal that the negotiations were fully and formally concluded. The ceremony had virtual participation by Thuli Dladla, minister of foreign affairs and international cooperation of Eswatini (formerly Swaziland) representing Africa; Kamina Johnson Smith of Jamaica representing the Caribbean, and Paolelei Luteru, Ambassador of Samoa, representing the Pacific. This agreement will commence a new phase of partnership between the ACP and the EU and sees the group committing to cooperate on issues of interest at the multilateral level.

The agreement is to be signed by the parties later this year in Samoa, COVID permitting, following completion of national and regional procedures for approval. It will enter into force after ratification.

This agreement has an overarching general section and three regional protocols for Africa, the Caribbean and the Pacific. It will provide the legal framework for the relationship between the OACPS and the EU for the next 20 years. As well as maintaining the ACP/EU structure, this new agreement will also strengthen the relationship at the regional level. Thus the regional structures will also need to be strengthened. The text of the agreement should now be available for study by stakeholders at the national and regional levels.

Part of the change which has come to the ACP/EU relationship is the method of providing development support (overseas development assistance). You will recall that the EU has abolished the European Development Fund from which the ACP was funded specifically.

Funding to the ACP regions will now come from the EU’s recently announced ‘Global Europe’ – Neighbourhood, Development, and International Cooperation Instrument valued at €79.5 billion, which is the EU’s overseas development assistance to all countries. This was approved by the EU Parliament and Council in March. As I understand it, the allocations to the ACP regions for geographic (region and country) programmes are €29 billion for Africa, €800 million for CARIFORUM countries, and €500 million for the Pacific. In addition, from my reading, it seems some additional funds could be available for thematic programmes, such as human rights and democracy, civil society organisations, peace stability, peace conflict prevention, and global challenges, as well as for rapid response actions (e.g., natural disasters).

To access these funds will require employing well-honed negotiating skills in Brussels and in the region. Much will depend on what new system is put in place for the allocation, management and implementation of these resources. It is also necessary to foster good relations in Brussels and to have a good track record for utilising funds, fully, efficiently and effectively.

Recall also that there is no specific funding attached to the implementation of the CF/EU EPA, the trade arrangement. This agreement is now in its 13th year and its second five-year review is now overdue. The review report was issued in 2020 and shows that the benefits of the EPA have not been fully realised. It is expected that the actual ministerial review meeting will take place this year, but a date is still to be determined.

In 2020, the EU exported goods valued €5.43 billion to Caribbean countries and imported €3.40 billion, giving it a continuing surplus. As expected, goods trade declined in 2020 due to COVID. In 2019, total trade was €11.63b and in 2020, it declined to €8.81b. Trade in both exports and imports declined. Trade in services, mainly from tourism, also declined. CARIFORUM has to be looking at how to improve its trading relations with this EU of 27 members, especially in trade in services. The EU remains a significant trading partner.

In this time of change, the region and its members will have to further invest in building the relationship within the EU institutions and with its members.