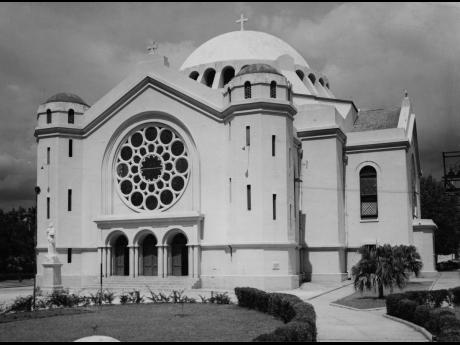 Gleaner Archives
A file photo of the Holy Trinity Cathedral in downtown Kingston. Three Roman Catholic bishops within Jamaica issued a joint statement in the face of the pandemic of crime and violence gripping Jamaica. It is not unusual for Catholic bishops to make statements on matters affecting the people in their dioceses, but joint statements by all three bishops are rare.

Most Jamaican non-Catholics are not aware that there are three quite separate Catholic jurisdictions (dioceses) in Jamaica, each which its own bishop. For the Anglicans, Jamaica is one diocese with one Lord Bishop, with three suffragan bishops governing the counties who report to him. The three Catholic bishops are autonomous within their dioceses, and even though one is an Archbishop, he has no jurisdiction over the other dioceses.

Most statements against ambient violence call on the State to take action; this is not unreasonable, as governments and the political parties behind them have a powerful influence on national affairs. What is particularly remarkable about this joint statement is that it commits the Catholic Church – clergy and people in the pew – to take action which will reduce violence.

“We are constrained to guide our members and all people of goodwill to commit ourselves to specific action to avert crime and promote authentic and holistic human development.”

ANALYSIS OF THE ROOT CAUSE

The bishops here reveal their analysis of the root cause of Jamaica’s social problems: fake ‘development’ that does not adequately address the whole person, and all people.

“We assert that people are not born criminals. All of us learn behaviour patterns – positive and negative – from our parents, families, church, schools, the media and the wider community.”

With one of the highest murder rates in the world, and being such a violent society, there must be something wrong with how we bring up – how we socialise – our children.

“While efforts to improve educational outcomes have focused on attaining higher levels of student achievement on examinations, we affirm equal priority of character formation as the ultimate goal of true education.

“The Catholic Church in Jamaica recommits to emphasise in the tens of thousands of young people in our more than 100 schools affirmative socialisation: values and practices of self-respect, respect for others, discipline, honesty, truth, responsibility for oneself, and a strong work and patriotic ethic.”

Because the Catholic Church has a major investment in the education of Jamaican youth – rural and urban, inner city and uptown – it is well placed to influence the values and attitudes that hold sway in Jamaican society.

“We commit to reduce, and eventually end, dropouts from our schools. We will do everything possible to prevent young people leaving school without reasonable certification in literacy, numeracy and at least one employable skill as well as exposure to good moral values.”

This commitment is not insignificant; school dropouts feed the gangs which prey on society, many of whom carry guns for this political party or that. If every graduate of a Catholic school – at whatever level – can work to grow the economy by their own ingenuity, the vicious cycle of underdevelopment and poverty can be broken.

“A stable, nurturing family is the most important factor in ensuring a child’s educational success and wholesome development. Our message is simple and direct. Fathers and mothers: if you want your child to do well and avoid getting sucked into antisocial conduct, find a way to stick together and give your children the best education and upbringing possible. We undertake to offer the strongest support for this. We particularly support the presence and full involvement of fathers in their children’s lives to share – equally with mothers – the tasks of parenting.”

Positive socialisation in schools often cannot counteract negative socialisation coming from the home. Here the Church recommits to promoting stable faithful family units and responsible sexuality, an ideal which has not yet caught on in this so-called Christian country.

“Being fully aware of the cruel and chronic inequalities of class and wealth in our nation, we urge Jamaicans to contemplate a radical reset of how the annual Budget is spent, how private wealth is gained and used; all should be directed towards the Gospel imperatives of caring and sharing.”

There is a lot implied in this sentence, which needs further explication. How Jamaica is currently organised is not working; fundamental change is needed. I wish the Church well in its efforts, and encourage wide support.

Peter Espeut is a development scientist and a Roman Catholic deacon. Send feedback to columns@gleanerjm.com