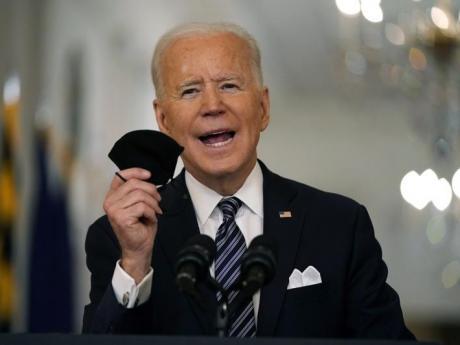 The Biden administration has taken a first, but crucial, step in the right direction. Now, the European Union, and other industrial nations, including Great Britain, China and Russia, must follow suit and give the world a good shot, within reasonable time, at beating the COVID-19 pandemic. They must back the proposal for a temporary waiver of intellectual property protections on vaccines against the coronavirus, so as to ramp up global production of the drugs.

We expect that there will be pushback by the pharmaceutical industry and the extreme purveyors of free market orthodoxy against this idea, but the matter that confronts these firms and nations is one of the great moral questions of the time, and how they respond will mark them in history. Moreover, while acceding to the proposal might affect the short-term profits of one sector, it is to the greater economic interest of these countries, and the world, if the COVID-19 crisis is solved relatively quickly.

Of the nearly 160 million people who have contracted the virus since its emergence in December 2019, more than three million have died. More than 46,000 of these cases, including over 800 of the deaths, are in Jamaica. Beyond the illnesses and loss of life caused by the pandemic, there is another tragedy with dire human consequences. The virus disrupted the global economies, throwing millions of people out of work. In many countries recovery is, at best, tentative. The livelihoods of many people are uncertain.

If there is a bright spot in this crisis it is the speed with which vaccines were developed to combat the virus. They offer the best hope for effectively ending the pandemic and creating the environment for economic recovery, globally. Except that access to vaccines is extremely uneven, skewed disproportionately in favour of rich countries where most were developed and whose governments pre-bought far more than is required to inoculate their populations.

Indeed, of the more than 1.2 billion vaccines administered up to late last week, 83 per cent were to people in high- and upper-middle-income countries, according to tracking data from Oxford University. A mere 0.3 per cent were received by people in poor countries.

For instance, of every 100 people in North America, 49 have received at least a single dose (some require two doses for full inoculation). In Europe, the ratio is 32 out of 100. Forty-five per cent of people in the United States have had a jab, and 32 per cent are fully vaccinated. More than half (52 per cent) of Britons have had a vaccination and 24 per cent a full course.

However, in Africa, only 1.4 per cent of the population has, so far, got a vaccine. Many countries on the continent, as well as in other poor regions of the world, haven’t been able to administer a single dose. As the Jamaican authorities have been pointing out, even if there is money to buy vaccines, supplies are not commercially available.

Should things continue on the present trajectory, a group of former world leaders and intellectuals, including Jamaica’s former prime minister, Percival J. Patterson, told President Biden in a recent open letter, “nine in 10 people in most poor countries may well go without a vaccine this year”. It would be 2024 before many of them can achieve mass immunisation, despite the United Nations-supported COVAX initiative to deliver vaccines to middle- and low-income countries.

It is against his backdrop that an initiative by India and South Africa to have the World Trade Organization’s (WTO) temporarily lift the TRIPS (Trade-Related Aspects of Intellectual Property Rights) protection from the COVID-19 vaccines has gained strong support among developing countries. Should that happen, companies and facilitating countries could produce the drugs without legal challenges for breaching intellectual property and related obligations.

Predictably, opponents claim that any such move will have a chilling effect on future investment in research and development and, therefore, be detrimental to innovation. Many people, though, have long argued the TRIPS gives disproportionate power to rich countries and their companies. The issue will likely reignite those debates at the WTO.

While that larger matter plays out, we agree with Katherine Tai, the US trade representative, that the “extraordinary circumstances of the pandemic call for extraordinary measures”. Hence, the Biden administration’s support for “the waiver of those protections for the COVID-19 vaccines”.

The president of the European Commission, Ursula von der Leyen, says the EU is ready to discuss the idea, for which the EU previously showed no enthusiasm. Hopefully, America’s declaration will push the EU aboard. Support from these two major blocs is vital.

However, the posture of Britain, Russia and China, themselves vaccine developers, will also be important, especially in the context of the WTO’s consensus approach to decision-making. Russia and China often declare their solidarity with developing countries and Beijing has worked hard in recent decades to establish a significant footprint in Africa, Asia and Latin America and the Caribbean. This is a moral test of the substance of those relationships, as well as of Britain’s historic ties with the Caribbean and Africa and its recent signal of the pivot to Asia to compete with China.

But for developing countries, the matter isn’t about geopolitical manoeuvring. It is potentially existential. But if nothing else, the vaccine countries will hopefully see self-interest in the initiative. Over the longer term, the economies of the developed countries won’t thrive if more than half of humanity remains ill and dying and forced deeper into poverty.