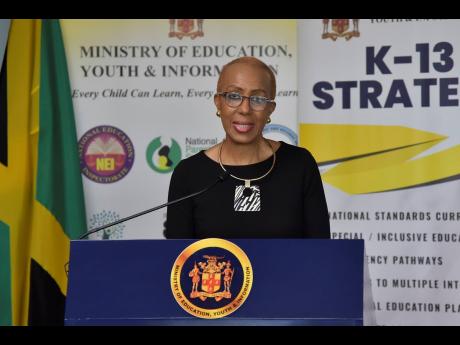 Minister Fayval Williams’ sectoral address on education last week confronted bravely most, if not all, of the systemic obstacles to transforming Jamaican people into a high-performing cadre of world-class productive citizens – the realisable and too-long-postponed dream of our national endeavours.

The big gap was the area of continuing education and resocialisation of the adult population, without which all we do in schools is going to be stunted. I suppose that given the inexplicable transfer of HEART and its appendages to the juggernaut of the prime minister’s office, she is leaving those subjects to him. Regrettable.

It is good, then, that the Government acknowledges the gravity of the teaching, learning and socialisation deficit which is holding back everything genuinely progressive. The disappointment which the minister must share is the inadequacy of response which she advances, not out of an absence of understanding or will, but because of misplaced resources and sheer cowardice to confront the ineffective structures of our education system.

You want examples? Three-quarters of the annual education budget is spent on compensation, with no effective accountability and a rate of return of only 25 per cent satisfactory outcomes; and after eleven and a half years of schooling ,an average loss of four and a half years of effective learning. That’s 40 per cent waste.

Here comes more. After the universally observed and documented loss of a year’s schooling by more than half of all students, we are heading into the usual, long summer break as if nothing really has happened. And after that, there is little more on offer to make up than the fuzzy promise of ministry-sponsored extra lessons and more tablets.

Oh yes, devices are good, but how effective when broadband is elusive; home discipline, food and emotional support are weak; and data plans unaffordable for the majority? Many schools are being billed for Internet services in US dollars. Where is the money to come from if parents are discouraged from contributing?

Since when can ‘extra lessons’ make up for a lost year? Minister Williams repeated in her address that there are “no shortcuts”to quality education. She quoted the pre-COVID-19 2013 education task force “that despite some positive gains ... the performance gap between where we are now and where we must go in the shortest possible time, IS TOO WIDE TO BENEFIT FROM SMALL INCREMENTAL MOVEMENTS” (my emphasis). Can we imagine how much more aggravated the situation is now because of the pandemic!

She wisely added: “We have to convince many of our fellow Jamaicans to make choices that value education more than other things as part of the equation.”

All that means is that having lost a year, the nation – parents, teachers, all of us, hopefully led by the Government – must either make up that year or make believe...Which will it be?

The minister gets it. She risks the scornful ire of the teachers’ collective, but should earn the gratitude of everyone of goodwill by daring to quote the World Bank 2015 study: “Observational data show that teachers in Jamaica spend the equivalent of two out of five days per week off task or on classroom management, and that of the remaining three days the entire class is engaged for only the equivalent of one day.”

Hello Jamaica! We have a big, big problem! This either has to be refuted or confronted tout de suite. No, minister. A leisurely ministry ‘study’ to check out what’s wrong does not cut it. Notice how little comment there has been on this one so far. May I respectfully suggest that the Parliamentary Committee on Social Affairs needs to sit weekly (not weakly) on this issue.

Then add to that the embarrassed silence (to put it at its best) at the report that, to save face and show off, teachers are doing student-based assessments (SBA) for many of the CSEC examination candidates who either can’t manage them or who have lost interest. This is to normalise corruption and plagiarism from fifth form.

Minister Williams and the administration of which she is a part are not responsible for all the deficiencies of the education system. There are systemic problems for which the response has been insufficient over generations. I accept my share of responsibility, having occupied that office.

The task which is uniquely that of the incumbent is to energise the rest of us, beyond any tribal politics or worse, class interests – parents, the JTA, churches and business interests– to double down on a timetable of thoroughgoing reform.

ENERGISE REST OF US

Like what, you ask? Well, since you won’t countenance repeating the lost academic year for those who have fallen behind, empanel your best public health talent – people like Professors Figueroa, Davidson and Bailey – and task them to develop the equivalent of an ‘Elegant Corridor’ of protocols for schools to safely resume face-to-face learning now. Then, quick time, since you think extra lessons will suffice, incentivise the teachers who can’t travel this year to run mandatory remedial summer schools, starting next month till September.

At the same time, ramp up the school-feeding programme to offer both breakfast and lunch as a pull for parents to send out their restless, video-game-besotted and hungry children.

Take some of the national security budget and pay for it. Effective schooling is seven times cheaper than prison.

And please, table, begin debate and refer to committee the Teaching Service Bill before Parliament goes on ‘vacation’.

All of us must worry that a very significant reason quoted for student drop-outs, absenteeism, failure to submit SBAs, and bad behaviour, is, as the minister asserted, “disinterest in education”. This, coupled with the inability to keep up, especially among young men, causes social cancer – silent, painful and eventually deadly.

So when your prospects are dim, there is no money; others are cutting corners and getting ahead; you are a disappointment to your parents and yourself; nature scratching you, what is likely?

Minister Williams and her team are to be supported, strengthened and held accountable by every well-thinking lover of our land.