Ronald Thwaites | A cyan believe it 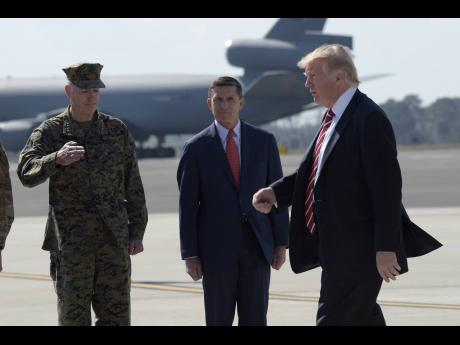 Almost half of American voters are showing clear signs of abandoning their commitment to democracy. That’s like almost half of Christians giving up on Jesus. A cyan believe it!

More than 50 per cent of Republicans are quite sure that Donald Trump really won the election last November and that President Biden is a soon-to-be-evicted squatter in the White House. And these are among the richest and most privileged people in the world.

Among them is Michael Flynn, formerly a general, whose orders to kill, thousands would jump to obey, declaring that the Donald “won big”, even as hundreds of millions of dollars are donated by the world’s richest to recount ballots for the umpteenth time to check for distorting ‘chads’ of Chinese bamboo!w

The ridiculous is elevated to become a dangerous diversion. Doubt about democratic institutions is being irreparably engendered by these antics. Which future election there or anywhere will be immune from contest? Is this Arizona or Belarus?

All this while, by every credible account, hackers of Russian origin have shown their ability to mash up the American energy and food chains with impunity. What’s next?

There are hundreds of bills in state legislatures aimed at restricting voting rights for people who are black, Latino or Asian. Many, if not most of these efforts are likely to succeed. The federal government is hamstrung, with the minority party having the ability to block any legislation to end repression or to reset the economy for the benefit of the majority of citizens. Mitch McConnell and Joe Manchin are ruling the roost and making Biden and Kamala look like lame ducks.

Vladimir Putin, Xi Jinping and every petty tyrant this side of Hades, must be having belly laughs at the self-destruction taking place in the erstwhile bastion of democracy. No wonder Putin, who clearly has secrets for Trump and who regularly poisons his opponents, is saying that the congressional invaders came with legitimate political requests!

Trump, by his manner and deed, has released the lapdogs of autocracy all over the world. That’s what January 6 taught them and, hopefully, us too. But I am afraid of our follow-fashion tendencies.

Freedom, that most precious of human faculties, has led its greatest defenders to turn on themselves, deny objective truth when it is convenient, exalt self-interest to the detriment of everyone else, and insist that the entire process is the vindication of personal liberty.

“Why can’t we do like ‘Minamar’ and have a coup to bring back Donald, real Christianity, and save America from you satanic liberals?” asked one ‘Trumpist’ guy I know. He owns 22 firearms, most bought from the local department store.

Social media, technology’s great gift to open expression, opens the gates of Hell to permit libel, slander, human debasement and voyeurism, covered with the cowardice of anonymity and scant accountability. Who filmed the George Wilson episode? Check the injustice being done to Dayton Campbell.

The far left and the far right converge in their extremities of narcissism and contempt for the ‘other’. For some of us who rate the Bible and are convinced that Christian social principles are the foundations of human dignity and a just social order, the suck-up by some church leaders to the new fascism is distressing. Thank God for the genuinely liberal but slim majority which still prevails. But can their redoubt prevail? America is becoming an embarrassment.

A cyan believe it fi true!

COVID-19 has made it worse – much worse. Because in the scramble to avoid the pandemic’s health and associated perils, the worst selfishness, the aggravated inequality, are shown up in all their technicolour ugliness. Not even the blessed heroism of so many or the gauche public relations charity efforts can hide that.

So, despite the ‘murderation’, the economic ‘pop-down’ and social depression, Jamaica feels like a psychologically safer place to be right now. But how can I be sure, and for how long?

After all, we have our George Floyds, there are a few Bill Barrs in Gordon House, not to mention that plutocrat of the local Wall Street who is confident that inflation will be held at bay by reduced purchasing power – aka, less money, less food, less school, more violence. A solution worthy of Stephen Miller – not far from the mentality of Idi Amin.

Fortunately, there is still space for us to reset. The first requirement is to get rid of the polarisation. All of it – party, church, race and class. Whose interest is it serving? Security guards and undertakers are the beneficiaries of our deep distrust of our own kith and kin.

It is hard, but vital, to swallow spit and commit to working together, rebuilding institutions of enterprise and national spirit. Could we begin by isolating just two areas which affect everybody and have historically brought us good? Concentrate on growing enough food and properly educating all our youth. Those two objectives, fully pursued, could keep everybody busy and begin, just begin, to unite us.

Do you have any better ideas?

Let our sad disgust at what is happening up North serve to stir a new resolve to show ourselves, them and the whole world what an ‘irie’, God-blessed people we really are – resistant to fake news, tired of show-off, recognising that the sharing and caring of our past can be recaptured as a worthy ethic for our troubled present.

The very effort would be something to believe in, wouldn’t it!