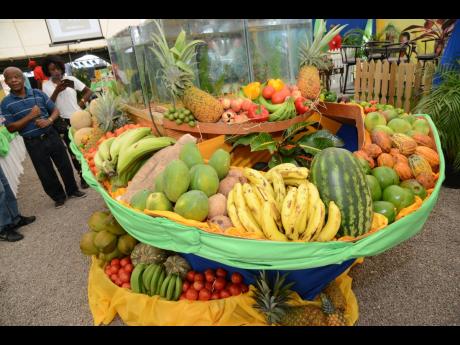 File
Locally grown fruits and vegetables on display at Denbigh Agriculture Show in 2016.

Jamaicans need to eat more locally produced food, particularly fruits, vegetables and tubers, so that we import less and keep healthy. The 2021 Global Report produced by The Food Security Information Network points to a food crisis driven by persistent conflict, weather extremes, pre-existing food bottlenecks and COVID-19-related economic shocks. The United Nations points out that the global food crisis has emerged with unprecedented increases in the price of food, and that this increase has led to substantial increases in the food import bill of some developing countries. Particularly impacted are developing countries whose inhabitants spend between 50 and 80 per cent of their income on food.

The Caribbean, and Jamaica in particular, is no exception from this impact both from the supply side and on the demand side. On the supply side, we are thinking of how food moves from the field to the consumer. That is, from the farmer, the food producer, the processor and the food distributor. While on the demand side we speak of the consumers and their consumption patterns. Jamaicans have moved from consuming traditional local food to a mixture of locally grown and imported food, and this change has impacted our food availability as well as the price that we pay for food.

COVID-19 has managed to disrupt the food security of the Caribbean although there is no evidence of a food shortage in the region, according to Food and Agricultural Organization Bulletin #19. Supply chains have been impacted, as can be seen in the hosting of community food markets. There is also disruption in shipping deliveries of imported commodities and rising inflationary food prices. The pandemic has led to a problem where the demand for food is greater than the supply. Caribbean governments harmonised their responses to supply chain disruptions by implementing joint policies on logistics and transport, ensuring common standards in intraregional transport of goods and people, travel bans of non-essential movement and closing the air, land and marine borders to passengers in order to maintain trade flow and to mitigate against the impact of the interruption of supply chains, United Nations Economic Commission for Latin America and the Caribbean reported.

According to an article in Borgen Magazine in July 2020, the World Food Program (WFP) estimated that 2.9 million people were food insecure across the English-speaking Caribbean and 400,000 of those food insecure people were severely food insecure. It is further said that the widespread socio-economic impact of the pandemic significantly altered livelihoods, increased job loss, reduced incomes, and that it will impact nutrition, eating habits and food security. In an effort to cope with reduced income, the World Food Programme reports that Caribbean people skip meals, consume less food at any particular meal and skip days of eating food. Persons in the lower-income socio-economic groupings of the society are altering their food consumption patterns as the duration of the pandemic lengthens.

This reduction in local food production is against the backdrop of climate change, growing dependence on imported food, shift from local traditional food and a corresponding movement towards North American food consumption. Dr Lystra Fletcher-Paul, former subregional coordinator for the Caribbean Food and Agriculture Organization of the United Nations (FAO), said that Caribbean nations are importing food that are killing their citizens, and pointed to the need for the region to increase their focus on agriculture for sustainability and health.

The impact of COVID-19 on food supply is unfolding locally. Local consumer and manufacturing groups have advised Jamaicans to brace for food items’ price increase. Food and Alcoholic Beverages carries a weight of 37.4 per cent in the consumer price index (CPI) produced by the Statistical Institute of Jamaica. This category has several subcategories, including vegetables and starchy food. It is this category that carries the heaviest weight in the CPI basket and determines the overall price. Its movement contributes significantly to the calculation of the rate of inflation experienced in the economy.

In January 2021 the rate of inflation as measured by the CPI was -1.6, in February it declined by 0.1 per cent, March saw an increase of 1.1 per cent and there was a decrease of 0.5 per cent in April. There were significant contributions to the movement from the food category, particularly vegetables and ground provisions.

This means that the prices of vegetables, such as tomatoes, lettuce, sweet pepper and cabbage, are impacting the rate of inflation. When the index increased in March, this subcategory rose by 0.2 per cent, and again in April, even though there was an overall decline in the CPI for that month. It is anticipated that the prices of ready-made food and other food products will also increase.

In order to achieve the target rate of inflation it is important that the prices of local vegetables and starches remain affordable to consumers, and that local producers are supported. Consuming local vegetables and tubers will also have well-needed health benefits. The path to bringing the demand for local food in line with its supply is also the path to sustainability and the achieving of the millennium development goals of no poverty, zero hunger, good health and well-being by 2030.

The low levels of savings present in low-income households mean that they are particularly disadvantaged since these households lack the desired safety net required to hedge against food shortages. Emphasis has to be placed on increasing the safety net so as to increase consumers’ access to food. When children do not go to school they do not benefit from the school-feeding programme, a social safety net. The cry of the farmer who sees his melon crop rotting in the field must be listened to since it is this farmer who is at risk of becoming marginalised and forced into poverty.

Sharon Nelson is a senior lecturer of Agricultural Economics at The University of Technology, Jamaica, and a Fulbright Scholar – Climate Change Food and Water Security. Send feedback to columns@gleanerjm.com