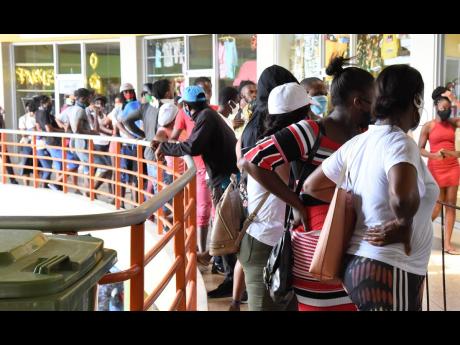 File
In this May 2020 photo, a long line of people waiting to collect their CARE grant is seen at Pavilion Mall in Half-Way Tree. A CAPRI study says CARE, the highly politically touted excuse for COVID-19 welfare, has not reached a large proportion of those for whom it was intended.

That was Ainsley’s explanation of his broken arm, swollen face and the stitches in his head. The plausible story he told was that some teenagers had raided the bucket where he keeps whatever food he has. “I had to defend my food,” he asserted with...

That was Ainsley’s explanation of his broken arm, swollen face and the stitches in his head. The plausible story he told was that some teenagers had raided the bucket where he keeps whatever food he has. “I had to defend my food,” he asserted with dignity. A fight ensued. Ainsley was overwhelmed and “dem bruk mi up”.

There is hunger on the streets now in almost equal proportion to the abundance of guns and shots which no state of emergency has a clue how to abate.

The noise of the child bawling as the heavy beating continued, overcame even the lusty singing in the Sunday night church service across the gully. Who tell me to leave church and go fast with the woman licking the pre-teen boy with a piece of board? “Oh, a mussi you a him fadda den! You have money to buy back what him teef,” she hissed at me.

Turns out that like Ainsley and, increasingly tens of thousands of Jamaicans, she had no work, decreasing the capacity to buy food ,and the son she was brutalising had committed the mortal sin of stealing some of the crackers and sugar she had put down for the next morning’s meal.

These were the real-life experiences which came to mind listening to reports of gunshots spilling blood, and while reading about all the stush places you can go to eat more than crackers and sugar – if only you have high colour and class and nuff money.

Let’s ask ourselves: if you don’t have work or a boops, how do you eat? And if you have pickney, what happens if they can’t stand the hungry, see all the luscious food ads on the TV and decide to raid Ainsley’s meagre food bucket or teef yu madda’s breakfast rations? Answer: somebody get bruk up.

Jennifer Jones’ CAPRI study tells us that CARE, the highly politically touted excuse for COVID-19 welfare, has not reached a large proportion of those for whom it was intended.

The chasm between those who have regular, nutritious food and those who do not, is wider than ever. It is at the root of much of the cynicism, withdrawal and deviance which is dragging down the country.

It need not be so. It cannot be beyond the capacity of a near-trillion-dollar Budget and more trillions of savings available for investment, for us to intentionally craft the opportunity for all of our citizens to eat properly every day. The resources are there to do this. It is our priorities which are skewed.

Look at what we are doing to the hundreds of thousands of children on PATH presently without access to school meals. What can a daily extra $100 (US six cents) buy that can fill them and make them productive learners? Please, could we find it in our hearts, or in our self-interest (if we have no heart), to make better provision for these little ones even before September morning?

In response to last week’s column about the confused roles of elected officials, especially in times of scarcity, The Gleaner, while in general agreement with the article, thought that I was making a “meal culpa” regarding the Constituency Development Fund (CDF).

Actually not. I support the CDF for so long as the State unnecessarily postpones establishing well-funded, fairly administered and properly resourced institutions to tend to human well-being. Sadly, if those CDF funds were not available, many more would not go to school, get medicine; would go hungry and, ultimately, get bruk up.

This newspaper is correct. Providing resources for elected officials is not the answer to persistent poverty. It will take the initiative of a prime minister to advance a revolutionary move towards human well-being, which could cut the quick of tribal politics. But who wants to do that? It will take considerable public pressure and cooperation with the opposition to make that happen.

But it could. The time is coming when planning starts for next year’s Budget. There are several existing institutions which could combine to conceptualise and manage a replete social deliverance system. The limited reforms presently contemplated for the public sector will not do.

First off, there has to be a non-negotiable, moral commitment that the objective of society is the provision of opportunity to every member to achieve the basic necessities of a fulfilling life. Connected to that resolve is the obligation of all to contribute to the collective effort. This is very different from the splurge for individual accretion on the one hand or the spirit of dependency and entitlement, both of which mentalities are so manifest among us.

These broad principles should guide taxation and public expenditure. Fidelity to them would make the production, distribution and affordability of food an obvious first priority. Effective education and healthcare would follow at once.

I keep remembering the little-appreciated period after Emancipation when the newly freed, conscious of new possibilities, despite crushing opposition, began crafting economic forms and communities which afforded sufficiency, and promoted sharing; not private wealth and ingrained inequality. This was what had to be crushed in 1865, when it was perceived as a threat to the colonial order.

To a different extent and in another form, the advent of the co-operative movement, and particularly the growth of credit unions in the 1940s after the earlier labour unrest, marked a resurgence of the same spirit of shared commitment, new enterprise and non-exploitative structure which alone can make a people with our history become great.

Political activity is supposed to serve these purposes. Does the ingrained tribalism and suck-up-to-the-rich practices of our time reflect this?

What a sad irony it is that the institutions crafted to advance our collective interests can become obstructions to those very ends. Wi bruk up fi true!