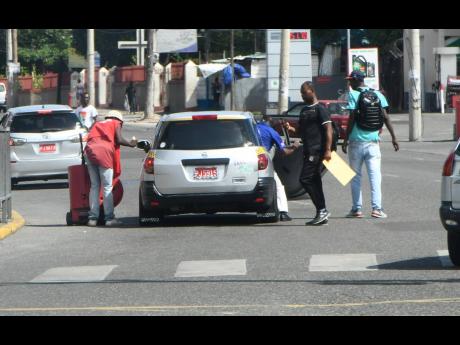 File
A taxi stops in the middle of the road in Half-Way Tree to pick up passengers.

The taxi man stopped to let off, and pick up, passengers almost in the middle of the road at Papine Square at peak hour one morning last week. “How you can do that man?” I dared to ask as the traffic flow ground to a stop behind him and the empty...

The taxi man stopped to let off, and pick up, passengers almost in the middle of the road at Papine Square at peak hour one morning last week. “How you can do that man?” I dared to ask as the traffic flow ground to a stop behind him and the empty JUTC bus beside us. “Go suck yu mumma, white bwoy, yu no si mi a do mi werk. Your bread butta. Two more to affwechee!” The three policemen within earshot gazed intently into their cell phones. Exactly. What else were they to do?

Afterwards I figured it out. For the taxi guy, as for many of the rest of us, getting through is what counts. If it takes blocking the road, inconveniencing everyone else, even oppressing the majority, then a so it go.

His position is perfectly understandable. That is the ethic of the street. If an alleged ‘woman-beater’ is entitled by law to sit in Parliament while the members pass laws about domestic violence, what are you telling me about I must not block road when I need to earn my money.

My guy has never been taught to wait his turn. Law is secondary for him. Didn’t we all see the police just stand around? There is no premium for restraint and order. In fact, it is to your disadvantage to do so. It’s true. Relative to him and those who think like that, my bread is indeed buttered, and his rough task is to fend for himself. Scarcity, oppressive history, chronic unfairness conspire to aggravate his drive to get ahead without regard to others.

But can you build a society on the foundation of such attitudes? Governments feel that harsh new laws reclaim order. That seldom works. When they used to hang pickpockets before huge crowds in London, pickpocketing among the onlookers was rampant.

(Sorry Andrew, a law criminalising corporal punishment will enshrine your commendable standard but, without more, it won’t much reduce violence and ‘advantage-taking’ against the weak. There has to be a much deeper figuring out of alternative methods of correction not to mention the whole issue of anger management. In our desperation and shallow thinking, we overrate the potency of deterrence and coercion.)

So where do Jamaicans learn that restraint and respect are both efficient and moral? What does to be moral mean in our historical context anyway? How are people to be convinced that there are more effective ways of getting a road fixed than by burning tyres and damaging it further, or redressing a perceived wrong other than by reprisal, or gouging the poor to make an unreasonable profit?

So how, and where, do you form and reform character, adjust mores and change behaviour traits? At home? Of course, but we know our present limitations in that sphere. Will it be on the street, tutored by the delusions of the spliff, the violent and sexy video games; maybe at the betting shop or in the banality of dancehall? Hello! That’s where it’s happening right now.

These thoughts are being expressed while the religious denomination to which I am attached is conducting a thoroughgoing revision of early-childhood education in our schools. We are determined to introduce a comprehensive civic, ethical, wholesome habit-inducing content, far more intense and intentional towards character formation than the present offerings.

After all, the great investment of our history, until COVID-19, was that there is a place in school for everyone growing up. This is a huge opportunity which has become underused as far as character formation is concerned. Understandable emphasis on academic performance, especially given the murderous competitiveness of PEP and its predecessors, combined with uncertainty as to what are serviceable and admirable character traits for life in Jamaica, have combined to diminish school-based life-skill training. Dress up and pose become substitutes.

This is the crucial arena for post-COVID-19 education. The minister of education identified this goal in her recent sectoral presentation. But I don’t see where the Government has worked out either the content or the method for delivery of this vital component of national enablement.

The strategic place to start is with the early-childhood cohort. This is the period of life when habits are ingrained, personality is developed, and life lessons are learned. Churches are contributing far less than they should, given their influence over schools. The ministry should expand the Brain Builders Programme to cover all communities by 2025. Teachers in the sector need to be reoriented and retrained, starting now.

This is not to ignore the complementary and often countervailing influences of parenting, community and media. But school is where we can affect now, largely within present resources.

Were we to succeed, after a while, all of us ‘advantage-takers’, including the next generation of taxi people and motorcyclists, might have a different perception of ourselves and a transformed view of the rights of others.